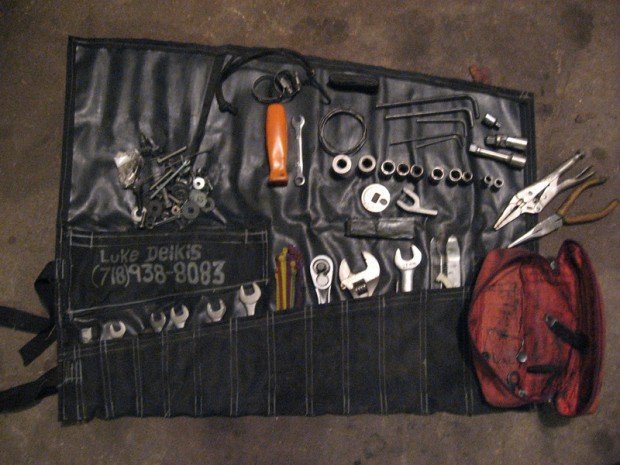 If you had a Shovelhead, you’d need three times this amount.

Once upon a time, I carried a tool roll on my motorcycle. This tool roll contained many useful items. It had screwdrivers, spanners, a pair of shifters, some electrical tape, a plug spanner, and if shit got real (and it did from time to time), there was a set of feeler gauges in there as well. Keeping all these bits company were some spare plugs, an assortment of nuts and bolts, a length of wire, and if it was a serious week-long journey, I would even squeeze a spare tyre tube in there.

Then man discovered fire and was able to keep the slavering dire-wolves at bay when it was noted that winter was coming. And along with winter came fuel injection.

Up until the advent of that marvellous creation, a service on my bike would cost somewhere in the vicinity of $400. I felt this was a reasonable price. After all, the mechanic was required to change the oil, the filters, the plugs, and set various shims and tappets and cause the carbies to be synchronous in their behaviour.

I was actually earning what might have been termed back then as a “living wage”, in that it enabled me to eat and drink and buy recreational drugs without having to rob grocery stores. So every few months I was able to save up enough money to have one of them greasy magicians work his magic on my bike. And if you had a good mechanic working on your bike, he was worth every cent of what you paid him.

But as fuel injection became ubiquitous, so did the on-board computational devices it required to make it do its thing. And virtually overnight, the servicing paradigm changed.

I first noticed this change when I delivered on of my early Speed Triples for servicing. I was told the cost would be “About $600 plus parts” and felt a bit unwell upon receiving this information. That afternoon I arrived a bit early to pick up my bike and beheld the apprentice sticking a slim metal rod that looked a bit like a sparkler into the bike’s exhaust system. I watched with great interest. Clearly some wondrous sorcery was about to take place. The apprentice then produced a lap-top computer and plugged it into a socket somewhere in the middle of the bike. The bike was then started and after a few key punches, the idle had smoothed out and the bike was running very sweetly.

“What happened there?” I asked the dirty mechanical child.

I did so, bemused at how a bike that was tuned in less than five minutes by a few taps on a keyboard could still command such a fee. Obviously changing the oil and the filter was now a process that required many hours of manual struggle and high levels of mechanical expertise. A month later, I decided to essay this summit myself and found that I could do such a thing in less than half-an-hour – and I am congenitally retarded when it comes to mechanical stuff. Ask anyone.

Several more winters came and went, critical human thought had been replaced by Facebook and the Internet, and there was no longer any need for anyone anywhere to carry a tool roll. All you needed nowadays was a tyre repair kit.

Motorcycles had become completely computerised cyborgs, beyond the ken of mortal men to tinker with. Sure, we were still permitted to adjust a chain now and again, and maybe lube it a bit, and tyre air was still firmly our responsibility, though there are quite a few bikes around these days that will tell you when you need to pay attention to your tyre pressure.

But as for you being able to deploy your tools by the side of the road when forward progress has been halted…well, that day is long gone.

Your input in that regard is no longer required. You have become surplus to the motorcycle’s needs.

The trade-off is pretty good, but. Motorcycles have become ever more idiot-proof. Anti-lock brakes, stability control, prescient suspension management, lean angle sensors, computerised necromancy that prevents you high-siding and low-siding by counter-acting your hamfisted throttle inputs…it just gets beauter and beauter with every passing winter.

Except when all that magnificent computational witchcraft decides to feed you a plate of cocks on some lonely road.

Then it is not so beaut.

Because all you can then do to your non-functioning motorcycle is stare at it. Swearing is pointless, though quite satisfying. Standing across the road from it and hurling your 10kg tool roll at it over and over and over is also very spiritually uplifting. Turning it off and on again, like a two-wheeled PC, has been known to work, as has jiggling and tapping those mysterious sealed black plastic boxes that are scattered throughout its guts.

But all you can really do is consume that dish of knobs and wait for a ute.