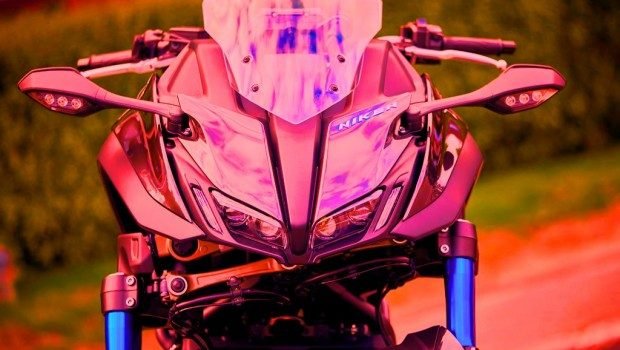 TALES OF THE NIKEN – EPISODE 8

In which our hero injects the Niken into a pool of masculinity so honourable it can only be viewed from afar by those who have not been to war. He then takes the Niken proper touring and mega-scratching on one of the best roads in the universe, while constantly lamenting the lack of wolves in this country from which to make seat-covers. And to eat the Highway Patrol, because that would be very helpful.

“You woke up this morning,

Got yourself a gun.
Your mama always said,

You’d be the chosen one.

She said: You’re one in a million

You’ve got to burn to shine

With a blue moon in your eye.”

In my time with the Niken I have fired it down all sorts of roads – the traditional ones, and the not-so-traditional ones which are a deeply-held secret lest the part-time-riding Social Media brigade discover them and bring the Bronze down upon my head. 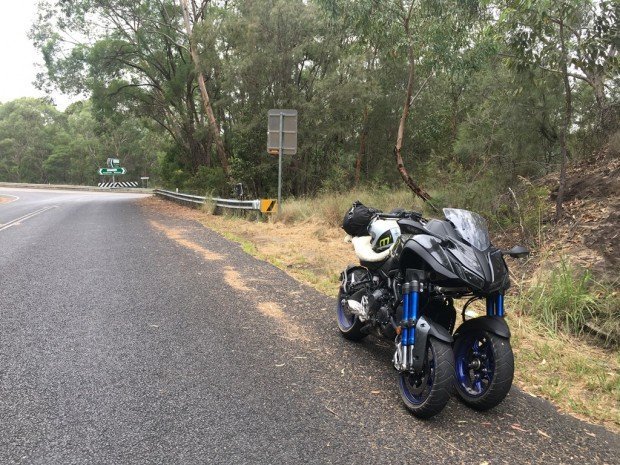 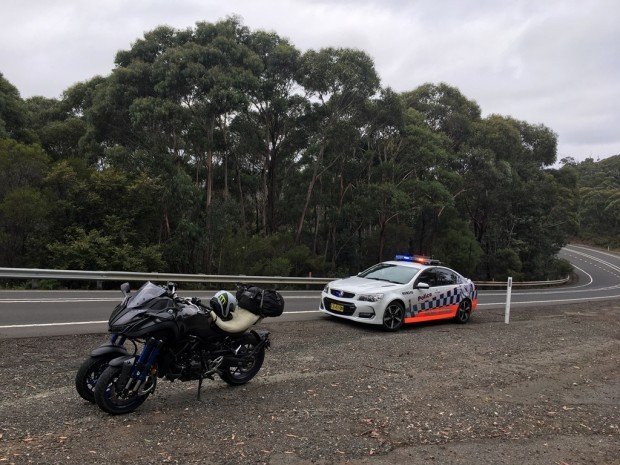 …but then it got less than great when this overfed sack of hero-guts came trundling out of the bushes to save me from myself.

I’ve now even been booked on the Niken (a small matter of an alleged 20km over some stupid arbitrary limit), so my time with the brilliantly bizarre three-wheeler has been…well, entirely holistic, I guess.

The whole point of the long-term thing was to see if the Niken can do and will do everything a normal motorcycle can and does.

And it can and it does. Some things, it does even better than a normal motorcycle.

I understand there are riders out there for whom the Niken is anathema. No matter how good it is, they will never consider it two primary reasons: a) It’s not a bike, and b) it’s ugly.
I agree it’s not a bike. It says so on the box.
The second reason is entirely subjective. 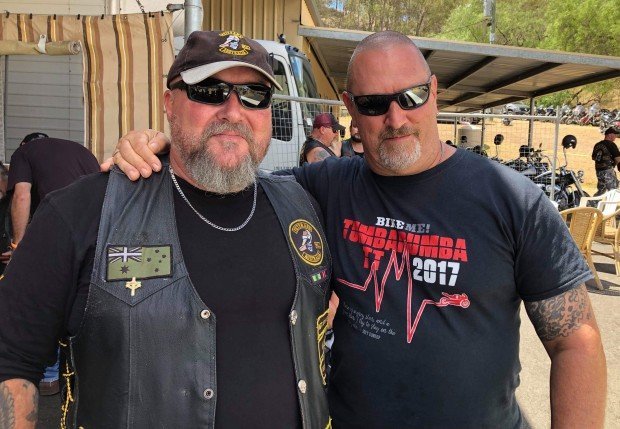 He works for Skol at Ozbike. I offered commiserations.

I don’t think it’s ugly. I think it’s bizarre. Like one of the Japanese Manga fighting sex-robots. And that is part of its immense appeal as far as I’m concerned. The fact some people are mortified by its other-worldliness makes me love it more. I already told you I’m a cussed and iconoclastic swine in that regard.

Besides, the day I start taking lessons about what looks good from people who ride bikes that in my view look more like shattered crabs bolted together by hallucinating drunks, is the day my soul starts to die. 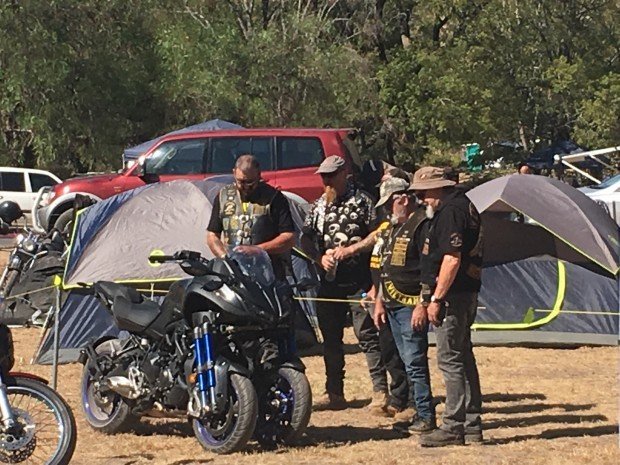 So now that we’ve agreed the Niken is not a motorcycle, and beauty is in the eye of the beholder, we can move on with grace and dignity.

I took it to the recent Veterans Thunderwest Rally. I had no plans to enter it into the bike show, but the blokes on the gate felt it should go and get its weird on among the traditional cruisers and the odd glorious workshop special. 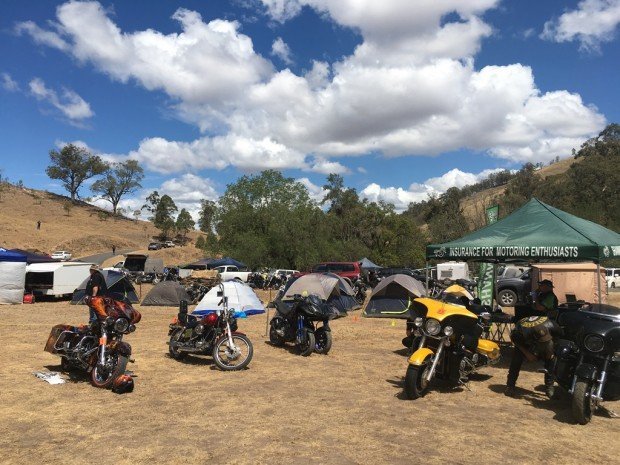 It fit right in. Like, you’d not even notice it.

“That’s just crazy,” one bloke said as I dismounted. “Did you make it?”

I was tempted to tell him that yes, I did, but only after eating handfuls of speckled toadstools and drinking lots of mezcal. 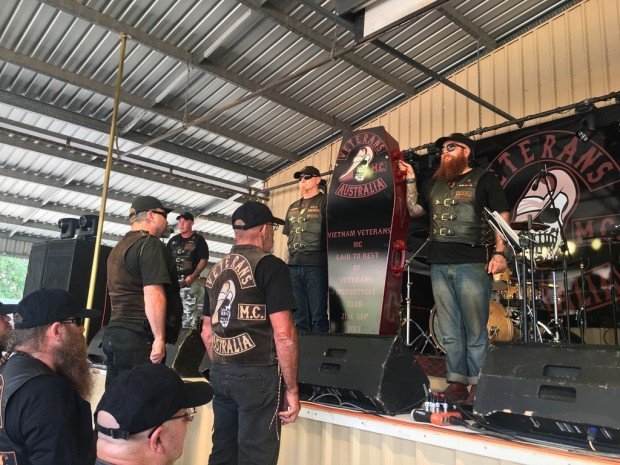 Laying the old colours to rest.

He looked at me blankly. This was clearly not a man who had ever had an issue with his front-end squirming in a red-misted death-race.

“It looks heavy. How much does it weigh?” he said, his voice smug with superiority.

“About 100kg less than your Harley,” I replied. 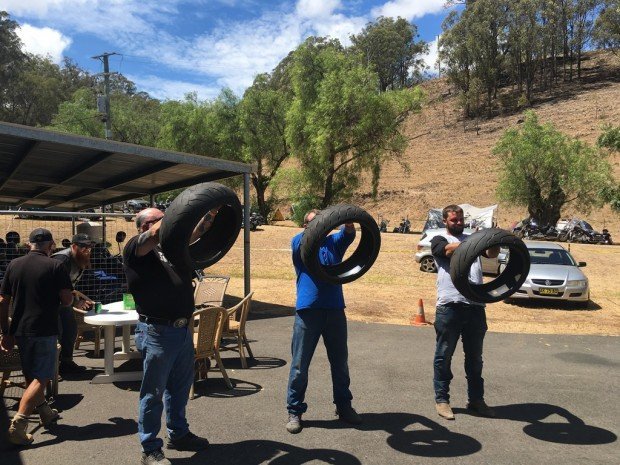 I feel that feats of strength are a must wherever men gather.

He pondered that revelation.

The Veterans MC puts on a great old-school biker do. Its facility in the hills near Murrurundi, FSB Pearlbrook, is amazing and I encourage you to check it out at the next opportunity.

My thanks to Stirrer, Eka, and his good lady, Amy, for their hospitality.

The club conducted a ceremony involving the actual coffin from the movie Stone, where it laid to rest the colours of the Vietnam Veterans MC (its progenitor club), and then the bands came on, and I freely beered myself while watching people interact with the Niken from afar.

It really is not at all surprising how much attention it attracts. It is hugely unique – and the crowd it was in clearly don’t follow current motorcycle news with anything more than maybe a cursory view, so for many it was the first time they had beheld the Niken. I did chat to a few blokes about The Bizarreness, and while all of them could appreciate the engineering brilliance that went into it, I didn’t think this was the demographic it was really aimed at. Well, at least not this generation of Veterans, anyway.

The following weekend, I applied my trusty sheepskin to the seat and set off on what would be a 2300-odd km ride. 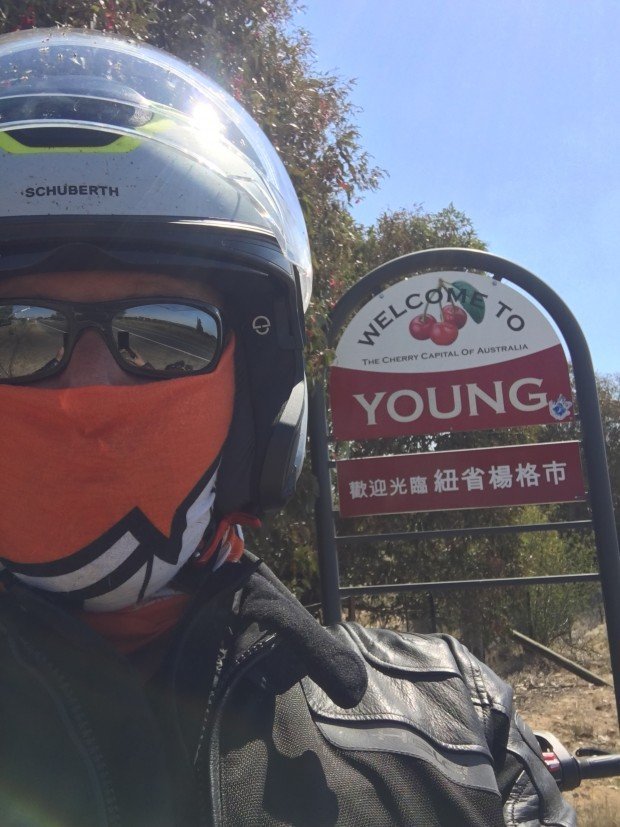 I love me them cherries.

From Mitta Mitta there was a to-and-fro running of the bulls to Omeo and back on the Saturday as part of the annual BikeMe! TT round, this year known as the Mitta Mitta Manifestation. Then there was more drinking, and then I went home a slightly different way by including the Bylong Valley Way and excluding the Bells Line of Road and the hateful Rum Corps that befoul it. 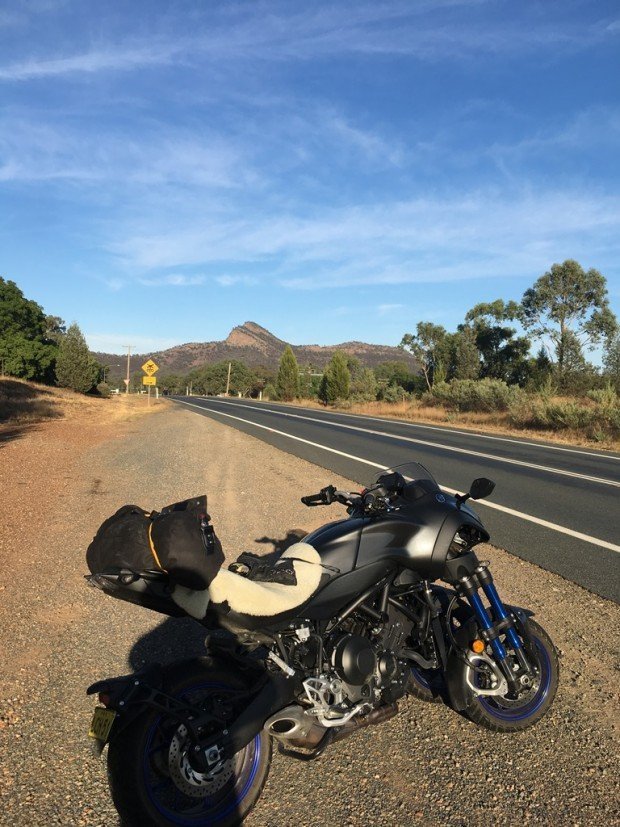 The Rock, known by the tourist mob as the “Lion of the Plains” and by locals as “The Fucken Rock”.

The first thing you need to know is the Niken is superb at touring. Once I sorted the seat with the sheepskin, it was great. I did constantly wish I had a wolfskin, or a bearskin, or maybe even the skin of panther instead of the lamb, but I live in Australia not Bosnia, so I made my peace with that.

It is amazing the difference to rider-buttock-comfort that thin piece of sheep made. I understand the touring version of the Niken, dubbed the GT, has the seat issue sorted and adds some panniers and a taller screen. I could give a shit about the screen, but the panniers would be welcome for touring. 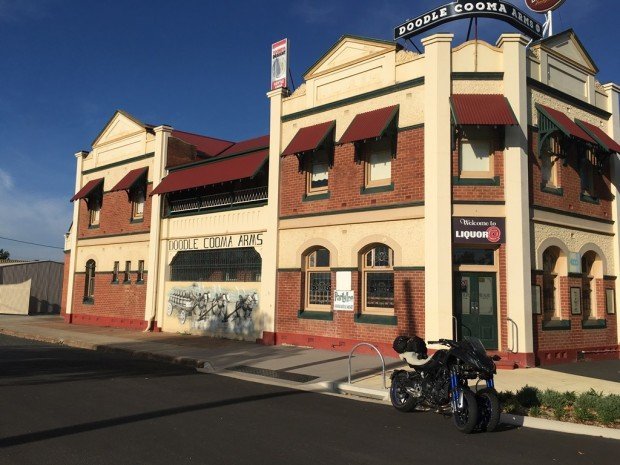 The Doodle Cooma Arms. It’s in Henty, which is nowhere near Cooma or Doodle. Or Arms for that matter. 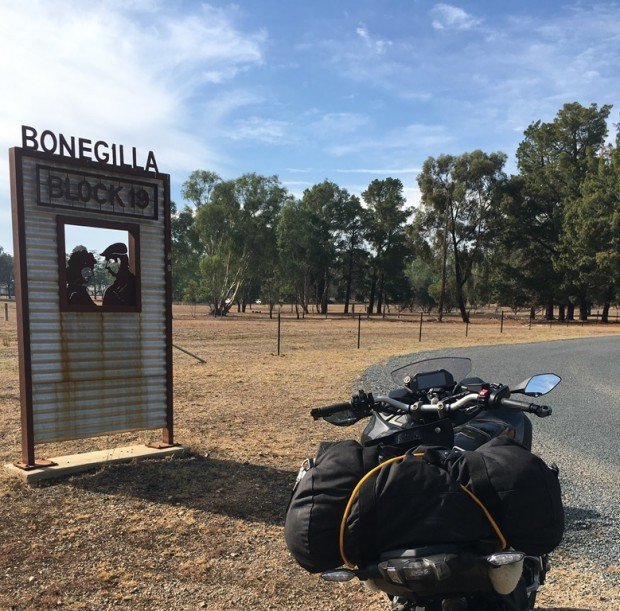 I visited Bonegilla, the army camp which housed Displaced Persons from Europe from the late 40s to the early 60s. My parents came to Australia via here. It was a place weighty with poignancy and loss.

Nonetheless, it was easy to strap stuff to the back seat, and the ergos really lend themselves to big miles and long riding days. I was able to stand on the pegs for a stretch, overtake dawdling chicanes with ease, not panic at shitty fuel economy (easy 300-odd out of a tank cruising at 120-130), and not have a shred of worry about the Niken’s reliability. It’s a Yamaha. It will outlast the human race.

Horrid crims, the lot of them. 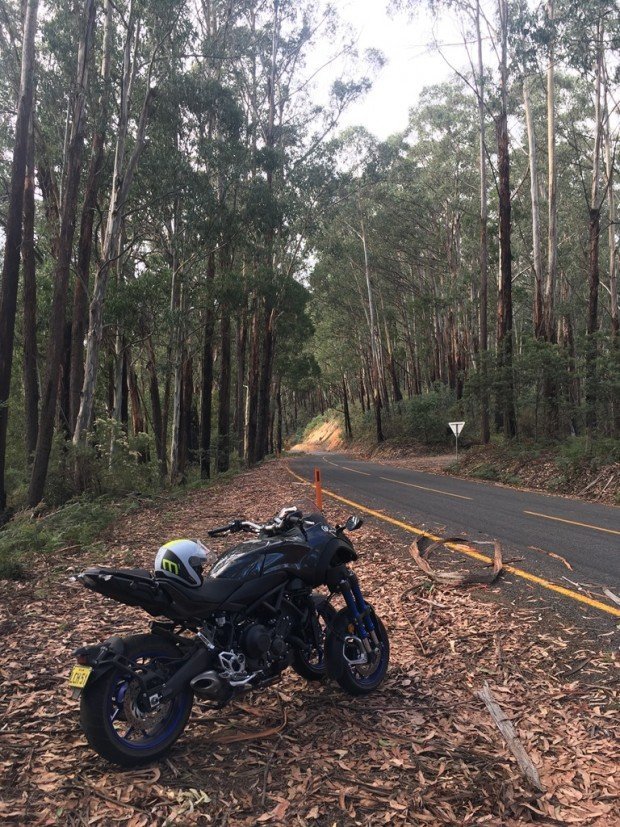 The road of bark and bends. 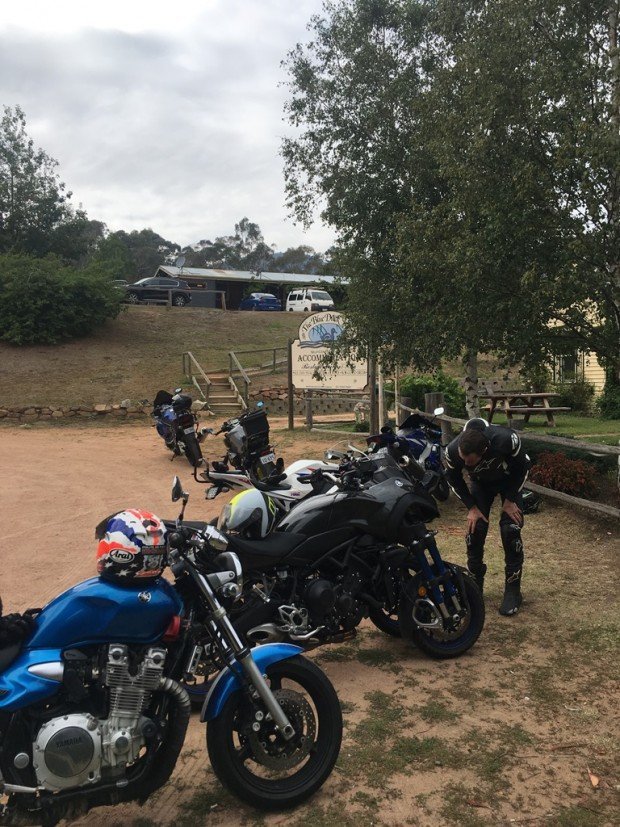 On Saturday, I put the spurs to it and hammered it to Omeo and back in some very fast company. This exercise showed me two things. 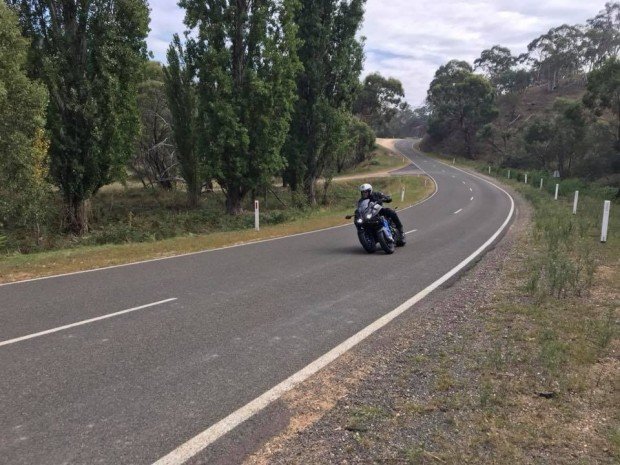 Coming down into Omeo.

The first is the Niken can hold its own with anything on the road.

The second is the Niken will never replace a well-ridden sportsbike.

But how many sportsbikes are actually well-ridden? Yeah, not that many. 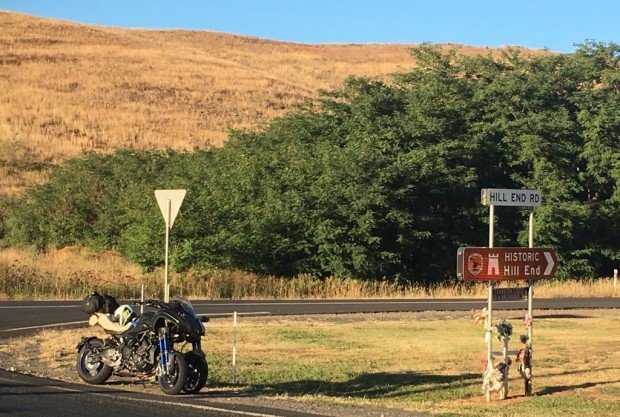 We’ve all been there.

I remember leading a pack of fast blokes through the mid-section of the Omeo-Mitta Mitta road. The road is tight, merciless and relentless (as some of you might know) and on this occasion, strewn with bark and leaves. The blokes on the big-bangers behind me just could not or would not put their bikes into those corners as hard as I could put the Niken. I could not lose them, but they could not pass me. Or maybe they would not pass me and were merely waiting for me to crash.
Either way, when I pulled over, they stopped and one of them said: “The confidence you have going into those corners is amazing. This thing surprised the hell of out me.” 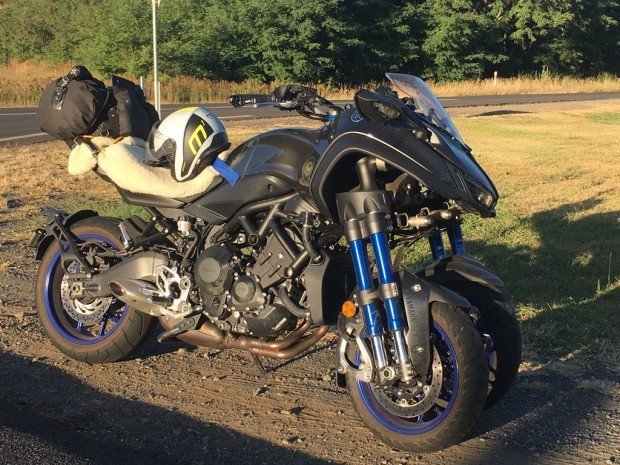 How much better would it look with a wolfskin on the seat?

I’m no great shakes as a rider, but I felt I did myself, my ancestors, and the Niken credit. Such is the confidence it does indeed instil in you.

That afternoon, I gave maybe 10 people a short ride on the beast – 10 minutes, no more, because no-one likes me to be stressed out – and I filmed their reactions when they returned. You can see those videos on my timeline.

Now these were all hardcore motorcyclists. Bitches and pantywaists don’t normally come on BikeMe! events, and I was curious to see their reaction. 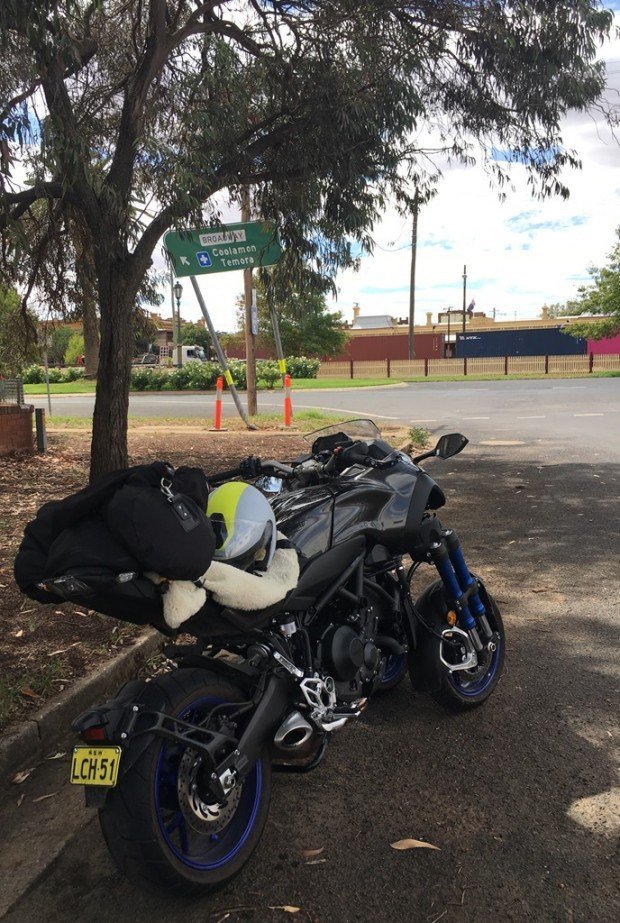 Each bloke came back utterly astounded at just how good the Niken was to ride. We all agreed it was a headfuck to look at. And that headfuck is based on programmed biases in every motorcyclist – myself included. But when you ride the Niken and shoot it into some corners…well, then and only then will you understand.

I still love it – it did me proud. 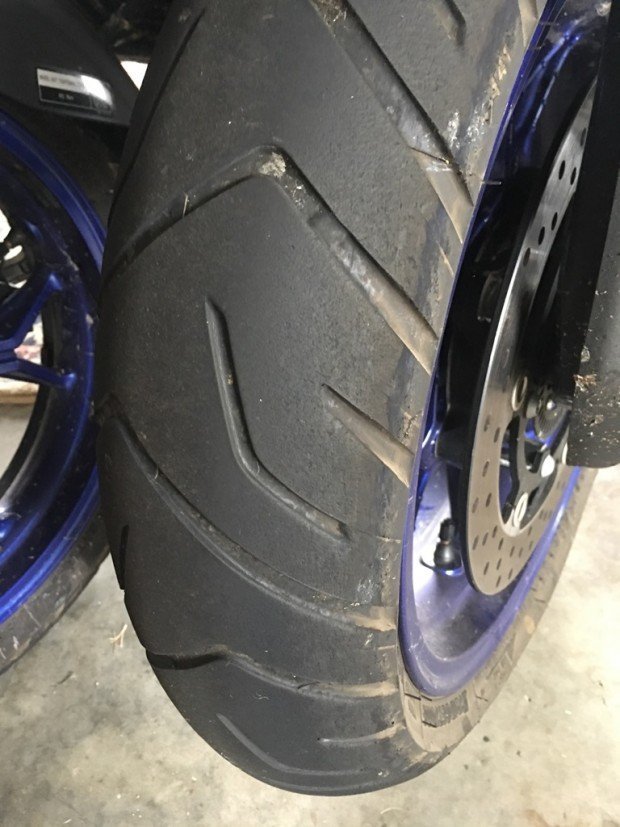 Both the fronts looked identical at 5641km. Probably another 2000 there. 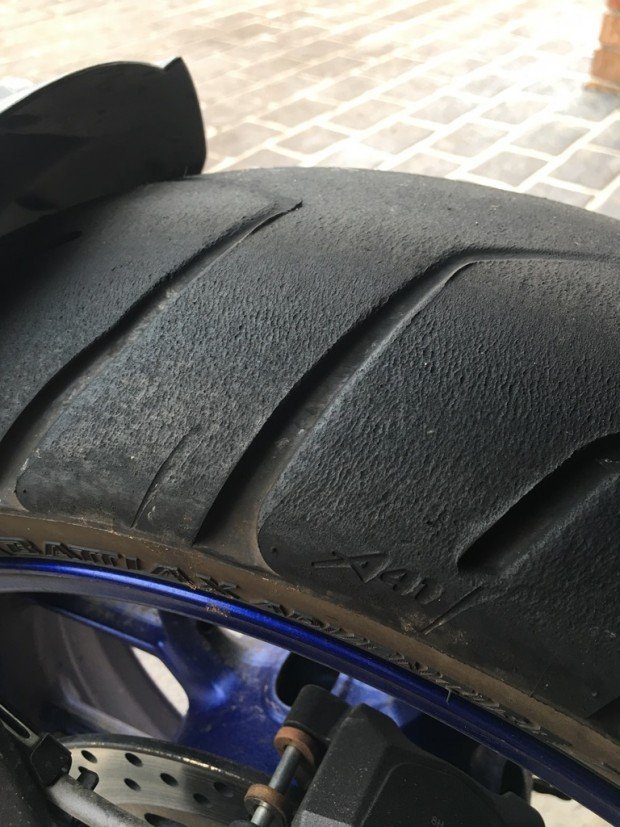 The back is pretty much over with.

The back-tyre has maybe 500-700km left in it if I baby it. The fronts still looked good for a few thousand. So it wears tyres at much the same rate a bike does. What happens when that back tyre starts to reach its use-by limit? Well, the back-end squirms a bit more under hard acceleration out of corners, but everything still hangs on with grim determination. The front-end has not budged or given me a second’s pause.