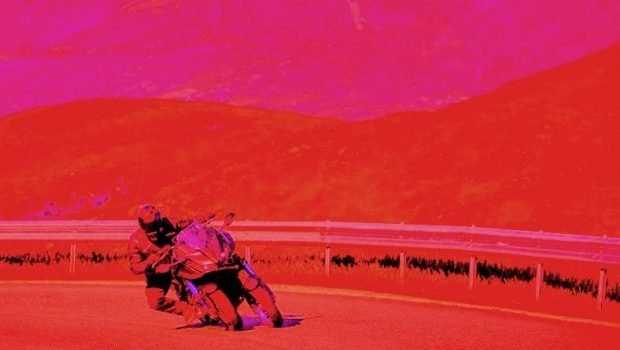 TALES OF THE NIKEN – EPISODE 3

In which our hero finds himself sassing up the Putty Road in the darkness before the dawn and waiting for a kangaroo to land on his face, before riding herd on 18-odd riders who have come to test-ride the Niken at Trooper Lu’s garage – a situation as surprising to him as it was to the appalled test-riders.

“Hey Ricky, now mine is empty, how about one for you?
We could sell it out together, seems tomorrow’s overdue.
Captain Video, done went home, one pilot laid to rest,
And dragon ladies now talk that talk,
about who loves who, who loves best
Silver bullets in the jukebox, spin another round
Everybody at the back of the line,
it’s midnight at the lost and found.” 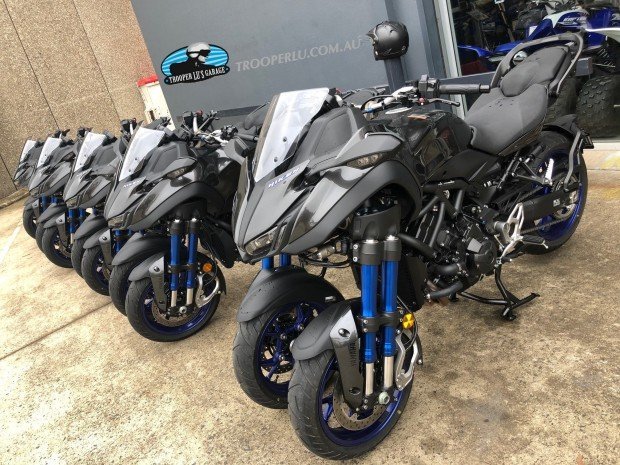 Looking at them in a line is like an optical illusion. More front-wheels than there are bikes…but wait…

Few things zest up your sweetmeats like riding a damp Putty Road at five am in the morning. Kangaroos, hoary and fey after a big night of reproducing like plague rats, are on the move. I see them on the sides of the road. I see them on the road itself. I see them out the corners of my eyes, lurking, and I have a sense at any second one of them will land on my face and it will all be over.

But no such thing happens, and as I descend into the Colo River valley the sun is up and I can now easily see whatever is planning on killing me.

Please, I will not countenance your tut-tutting about my route choices and hours of travel. It was either the Putty or it was the freeway, and I had to be at Trooper Lu’s Garage in Moorebank by eight am.

So Niken on the Putty in the dark and on the damp.

Lots of grip at the front. No shimmying at the back. Granted, I wasn’t exactly setting the world on fire, but I wasn’t quite idling along, either. My pace was a touch sassy, I guess. There is no glory in hitting a kangaroo at snail’s pace. This I know only too well.

I felt I was approaching the final vestiges of two-tyre grip a few times in the tight, greasy stuff, but it did not let go, and there were no stomach-churns of panic. So maybe I wasn’t. Maybe that’s just how the Niken feels pushing on damp bitumen – which we all know is the curse of two-wheels. The back tyre remained electronically planted, and I was probably riding a bit faster than I would have on a normal bike.

All I wished for was more light. The Niken’s headlights and their highbeams are adequate – like most motorcycles – but adequate doesn’t count for much in a country teeming with suicidal wildlife. I must speak to Narva. Surely it must produce LEDs which will melt the furred bastards or at least soften them up before impact. 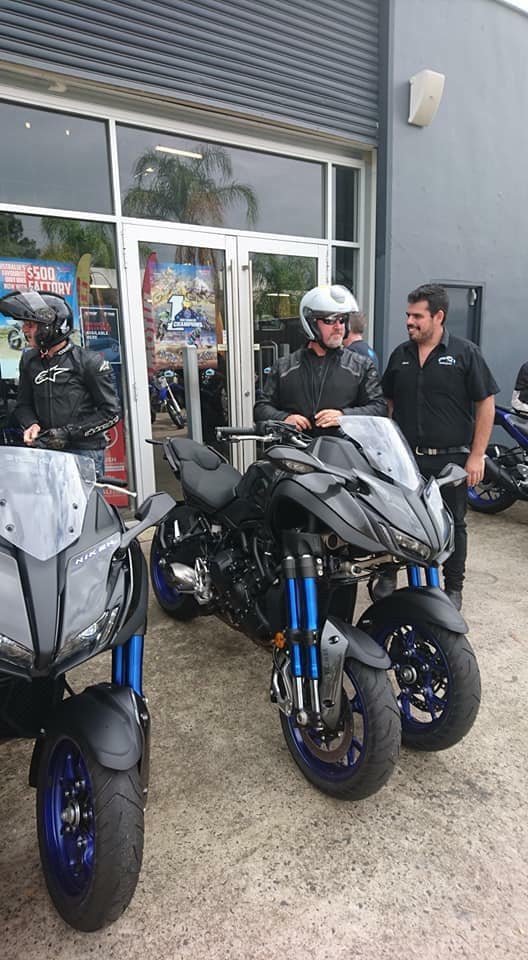 I was mulling this over in my head when I arrived at Trooper Lu’s, and was greeted by Christos, the sales manager.

Christos and I go back a-ways. He is on my list of people I probably won’t probably ever need to stab.

“Mate, is there any way I could impose upon you to lead the test-rides today?” he said after first gentling me up some with coffee.

“Is there no-one else?” I asked. “You know I don’t like people, and I especially don’t like people I don’t know who have to follow me on vehicles they have never ridden before. If one of them falls off it will shame me, and I will have to deal with all the witnesses. It’s possible no-one shall return.”

Christos look alarmed, but he rallied.

“It’s not very far,” he said, and showed me a map of the test-ride.

Some 16 cynical but very interested people had turned up to have a go at the Niken, and four short rides were planned.

But first, I was asked to hold forth to the assembly.

So I told them a bit about how I felt when I was confronted with the Niken in New Zealand, and then I told them how I felt after I had put some very fast Kiwi klicks under its trio of tyres. I answered some questions about lane-splitting, fuel economy, and seat comfort.

And then I told them to put all their pre-conceived notions to one side and ride the Niken as if they were riding a motorcycle.

Some really interesting stuff happened after that.

We all set off on the small 15-odd km loop. And I could see in my mirrors how hesitant most of them were. They were all motorcyclists and this was a three-wheeled gargoyle of non-motorcycling, after all, right? How the hell was all this going to work?

Then we did some corners and rode back to the showroom. They were transformed. And smiling. And chattering at each other.

“It’s not what I expected.”

“I’d like to spend much more time on it.”

“That suspension is the best I have ever ridden.”

“I was sold at the first roundabout.”

I’m not sure why this pleased me very much, but it did.

It’s a rare and wonderful thing when you tell total non-believing strangers a true thing, then watch as that thing becomes true for them.

“Are any of you attracted to each other?” I demanded. There was one girl there, but I felt she would be immune to any alleged Niken gayness which might have assaulted the men.

They all looked a bit confused at first, but then confirmed they were all as heterosexual as they were when they came for the test-ride.

“Good to hear,” I clapped. “If it changes, call Christos and tell him immediately.” 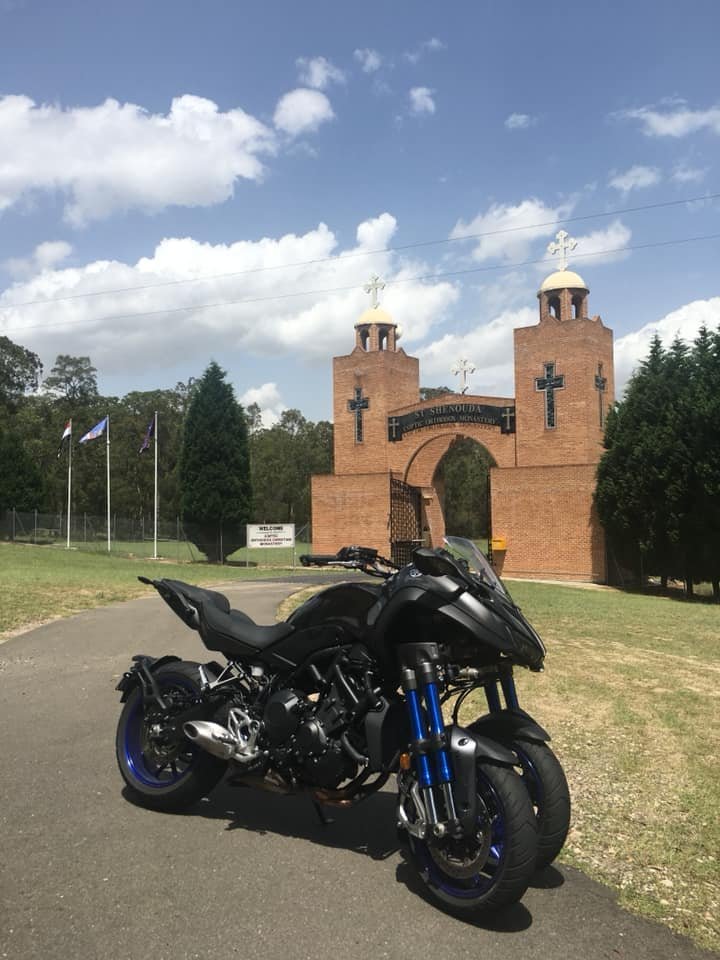 “Abbot! There is an evil at the gates!”

I left Trooper Lu’s and tried very hard to unsettle the Niken back up the now dry Putty on the way home. I tried so hard I only unsettled myself and had to stop at the Orthodox Monastery of St Shenouda the Archimandrite, touch the gate, and take comfort in his words:

“Blessed is he who laments over himself here on their own, for they will be rescued from the continuous gnashing of teeth and eternal weeping and will rejoice and enjoy a heavenly happiness.”

Suitably comforted, I tried even harder and eventually pulled up at the refurbished Bulga Tavern (formerly Cockfighter’s Ghost). 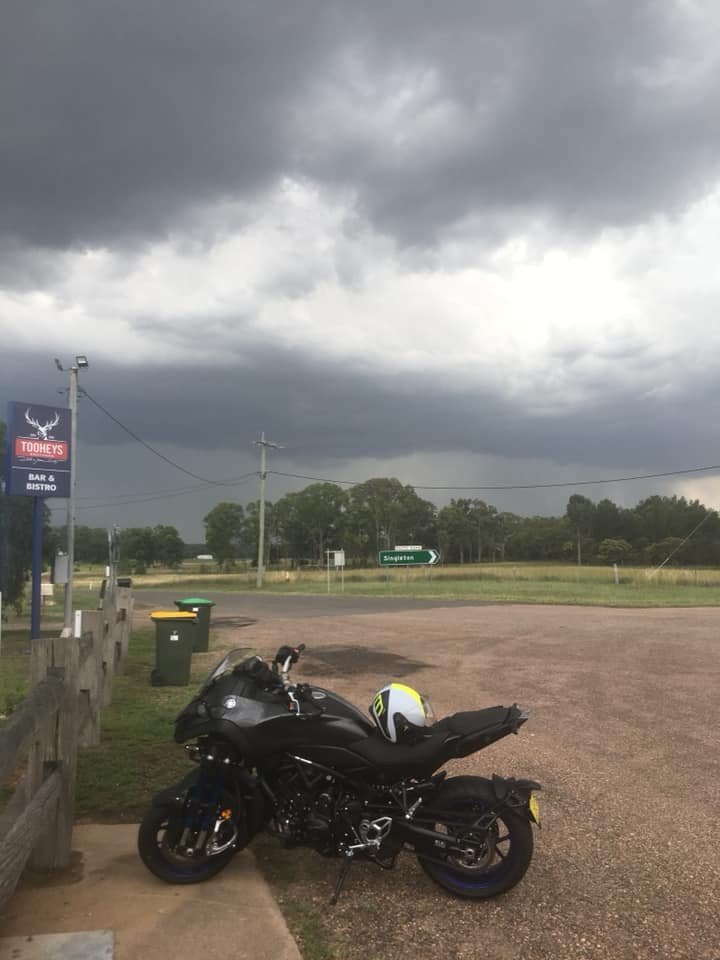 “I’ll be there in a second. I hope you don’t run out of rain before that.” 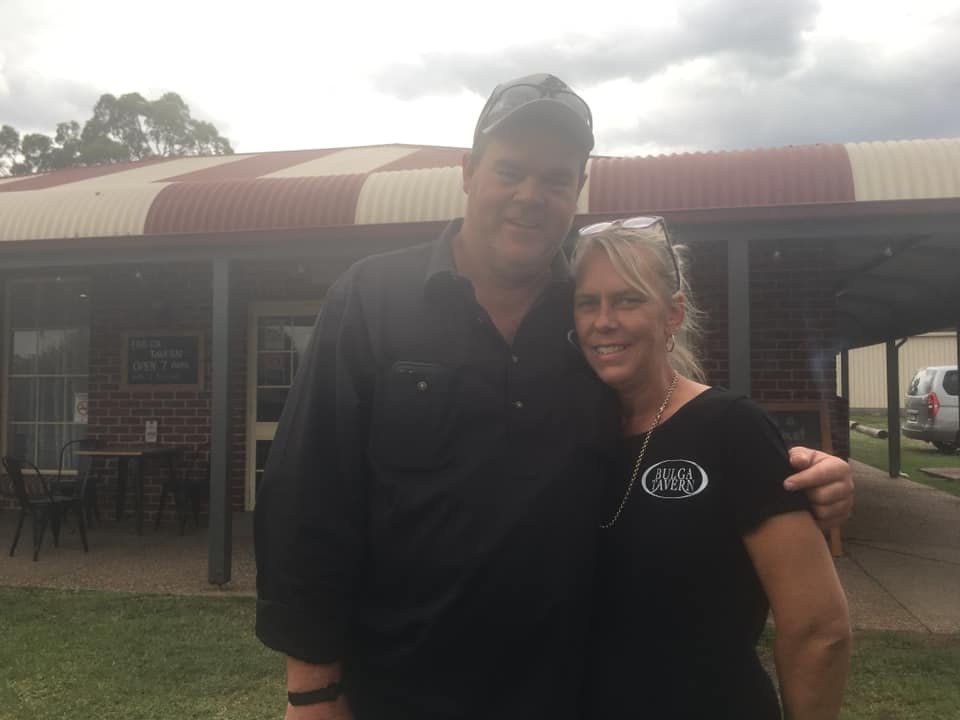 Warren and Lee are the new owners of the Bulga Tavern.

I had a beer and watched a massive thunderstorm approaching. The air was gravid with thunder. In the distance and in the direction I had to ride, the rain looked apocalyptic.

With St Shenouda’s help, I might be able to beat that, I thought.

Few men have entered the 60 zone of Singleton at 190km/h. I am one of those men.

But it was too late. The Archimandrite had deserted me. In 50 metres it was as if I had fallen into the sea. Just not as salty.

And now I have to wash the damned thing…

Trooper Lu garage paid me to attend this event. The price was one average coffee which Christos made with his own little hands, and one bottle of Coke Zero which Christos bought with the boss’s money, of which I drank only half because I had to take another test-ride group out.