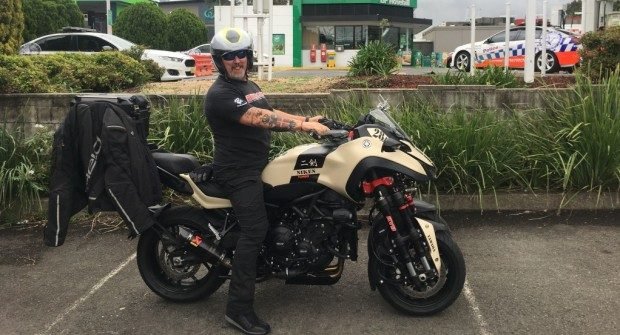 CRAP IMAGES BY ME 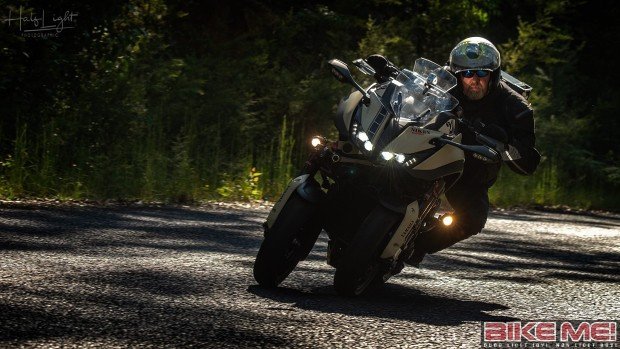 How Nick got my face lit like that is a mystery. I’m glad I didn’t eat his brains.

In which our hero demonstrates the insurmountable spirit extant in his soul, offers life-advice even where none is asked for, and shows a level of care and concern for younger riders which would be shameful in a lesser man.

“I’ve never towed a bike before,” he said, his eyes wide.

“And you won’t be towing one today,” I told him. “Nick will tow me behind his car.”

Harry could learn all about the joys of towing a bike with another bike another time. It would be character-building for him.

I rode the Boulevard to Jerry’s and asked if he had a tow-rope. He didn’t, but he made some calls and an old mate of mine 10 kays away had one.

I called Kristos at Trooper Lu’s. I tried calling Justin, but he was racing dirt buggies at Colo and was a million miles away, and also out of phone contact.

“Kristos,” I said. “I have fried the clutch on the Niken.”

This is why I love Kristos. He gets it.

“You need to come and get it.”

“It’s a place where I’m hoping the Niken will be after I’ve towed it here behind a car.”

I rode off down the road to get the tow-rope.

As I rode past the turn-off to the dam where Nick and Harry were waiting for me, two Highway Patrol cars were turning onto that road with intent. Clearly, someone had called the cops after listening to me hammer that screaming Niken up and down that road for the last hour.

“Cool,” I said to myself. “The cops will bathe them in capsicum spray, electricity, and chains by the time I get there. The Niken will be on its way to the crusher, and some years from now, Justin and I will have a beer and laugh about it all.”

I got the rope and rode back, fully expecting to see something like Waco where I’d left Nick and Harry.

“Where are the cops?” I asked. 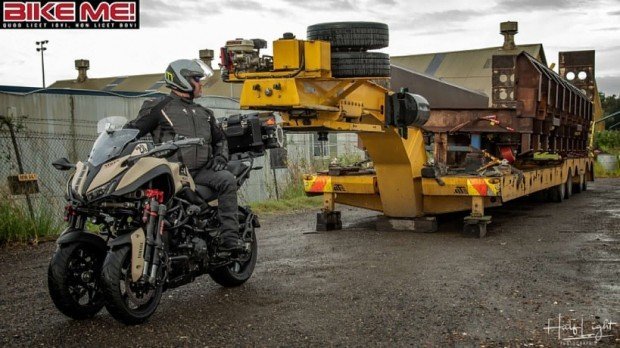 Nick shrugged. “They drove past. You’d think they would have stopped to see if we were alright. Worthless uncaring swine.”

“You know the minute we start towing this thing, they will appear and beat us to death.”

“Is it illegal to tow a bike?” Harry asked.

“Life Lesson Number 2256, boy,” I said evenly. “If the police decide a thing is illegal, then it is illegal.”

We all pondered that for a minute.

“I’m going to ride to the look-out and see what they’re doing,” I finally said.

I rode down and sure enough, the two Highway Patrol cars were parked next to a picnic table and the male and female police officers were enjoying a coffee and chat – celebrating what was a beautiful autumn day, before going back to making everyone’s life a misery while chanting “Stopitorcopitstopitorcopit” in the dank, electronic fug of their cars.

I rode back to Nick and Harry.

“I suggest we wait a bit. They will not be there forever.”

So we waited and in the fullness of time the two cop cars went past us and back onto the Wollombi Road to raise money for the State.

“That’s just great,” Nick said. “Would it have killed them to stop and see if we needed any help?”

“Yeah,” I said, nodding at Harry. “For all they knew two old pedos had kidnapped this kid and were gonna make hot bush-love to him under that tree.”

“Relax,” I said. “It’s not like you would even be awake, hypothetically.”

I then asked Harry to ride the Boulevard back to Jerry’s while Nick and I made the towing arrangements.

“You done this before?” I asked Nick. 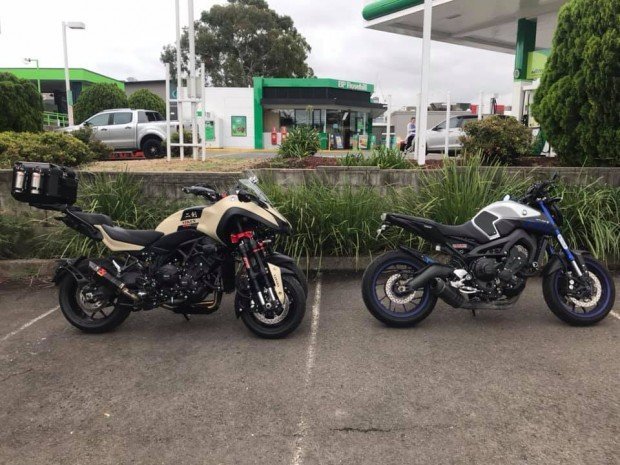 That’s Harry’s bike on the right. The one with no rear footpegs.

I tied the rope to his tow-bar, looped it under the handy crash bar on the Niken and then fed it up around the left-hand grip, where I made one loop. I did not tie it off because this is not my first rodeo.

The idea is to hold the once-looped end of the rope in your hand as you also hold the left-hand grip. If the towing goes to shit, you let go of the rope, which will then (theoretically) unravel and break the umbilical connection with the vehicle towing you. This is much better than having the towed bike being dragged on its side because it’s tied firmly to the tow-rope and the tow has gone badly.

And tows go badly a lot. Especially 20-odd-km-long ones.

But Nick and I are old warhorses.

He managed to keep it under 80km/h and hour and I managed to keep the strain on the rope by skilful use of the brakes and loud swearing, and we got to Jerry’s without mishap.

Jerry’s closes at four. Kristos would be there at 630. The Boulevard has no rear seat.

“Great. We’ll go and get Harry’s bike, I can double him back here so the hillbillies won’t strip the Niken, Kristos will bring the Tracer I left in his shop, I can ride that home, and Harry can head back to Sydney.”

“I don’t have any pillion pegs,” Harry said.

“OK, this is how it will be,” I finally said. “Nick will drive you to my place. I will ride the Boulevard. We will stop and take shots of the Bouelvard because we still have a job to do. The I will drive you back here in the ute. We will wait for Kristos because I cannot leave the Niken in a deserted servo when the banjos start playing. Then you will drive the ute back and I will ride the Tracer. Then I will get drunk on my patio and you will listen to my stories instead of going out with your hooligan mates on Saturday night, and go home tomorrow.”

And since this was not a debating topic, everyone was forced to comply.

Three hours later, Harry and I were back at Jerry’s, just as the place was closing up.

One of the Highway Patrol cars from that morning was parked around the side and the cop was sitting at the table with some of the staff.

“I can’t leave that thing here when the place is closed,” I said, making eye-contact with the cop. “It’s not like you can rely on the police to look after your property when the enforcement of safety is taking place.”

“I look after my own property,” the cop said.

“I wasn’t speaking to you,” I said and went over to wheel the Niken out so Kristos could see it and not keep on driving to Wollombi.

“I can’t believe you just said that to the cop,” Harry whispered.

I shrugged. Harry’s motorcycle-life journey is still in its infancy and his generation was born and raised in subjugation to the police. Mine wasn’t. You spend enough time in handcuffs and holding cells, and the intimidation-spell police like to cast wears right off.

Jerry’s Café emptied of all but three blokes and us. It was five pm, the glorious day was melting into an equally soft and golden dusk. 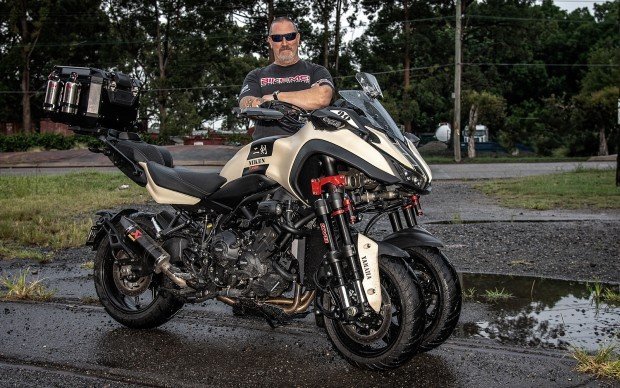 So much goodness. The Niken. Not me. Not me at all.

The three blokes wandered over to behold the Turbo Niken. They asked knowledgeable questions about the boost, the negative vacuum generated by the turbo (so its kinda turboing even off boost), the crazy enhanced front-end, and that glory of a top-box – which you can see in the corner of the mirrors when you’re riding and it makes you think like you’re seeing bats flapping at the edge of your vision. I been there before, so I don’t mind it.

When they left, Harry and I sat in the empty service-station-come-café in mostly companionable silence.

“I don’t think you could have left it here by itself,” he eventually said.

I shook my head. “I don’t think so, either. Look at it. It’s got thousands of dollars-worth of interesting stuff on it, it’s in my care, and when the wind is right you can hear the strumming of the banjos and the clanking of toolboxes. Trust nothing, Harry. Defend your shit. Prepare for war. Be hard to kill.”

“Awesome!” he enthused again when I showed him the lack of clutch.

He and his offsider off-loaded my Tracer, loaded the Turbo Niken onto the trailer, and I poured what I hoped was not two-stroke into the Tracer’s tank.

The bike was nearly empty when I dropped it at Trooper Lu’s the day before. I remembered this at the last minute and tossed a petrol can into the ute knowing there was no petrol to be had between Kulnura and Singleton in the afternoon. It smelled alright as I poured it in, so I tossed Harry the keys to the ute.

I shook my head. If he hit a roo because I had done a burnout forcing us to ride through Shit-Rat Central, I would have trouble sleeping at night. My fault we were here. So I would take the risk.

I blinked at him.

“Um, celebrate the richness of our native wildlife? What do you mean?”

“Can you actually drive?” I asked. It had not even occurred to me that he might not be able to.

“OK, here’s how it works. Take it easy. If something jumps out, do not swerve like a mad bitch, just brake and try and avoid it without spearing off the road…hell, never mind. Just drive straight over the top of the thing and hope it doesn’t go through the windscreen and kill you in its death-throes.”

Two hours later we were eating our dinner at the Criterion Hotel in Singleton and congratulating ourselves on a death-and-arrest-free day.

I saw lots of kangaroos. I see them all the time after the one I nailed north of Port Augusta a few years back. I see them jumping out of trees, lurking behind bushes, rising out of the road…

Still, big success. I did not hit one. Not even an imaginary one.

And all of this for a dozen images.

And of course, the Niken would get a heavier clutch. Justin had already called me with a solution. He’s a crazy perfectionist like that and it killed him a little to let me out on a bike that overwhelmed the standard clutch.

“I’ve already ordered an earlier-model MT-09 clutch with heaver springs and Kevlar plates,” he said to me when we spoke that evening.