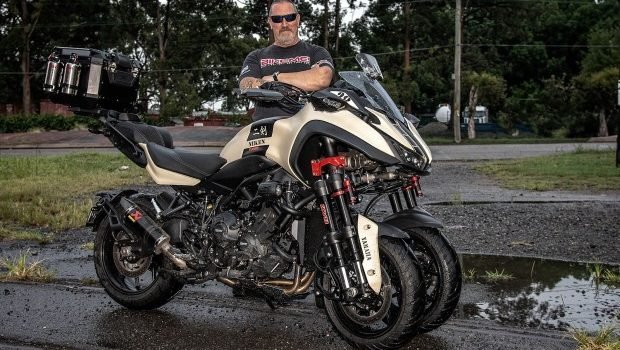 TALES OF THE NIKEN – EPISODE 10 (SUPPLEMENTAL TURBO VERSION PART ONE)

CRAP IMAGES BY ME

In which our hero demonstrates the efficacy of shit-magnetism, forced induction, old friendships, and how important the little things are – like seats and footpegs and clutches – especially when you don’t have them. 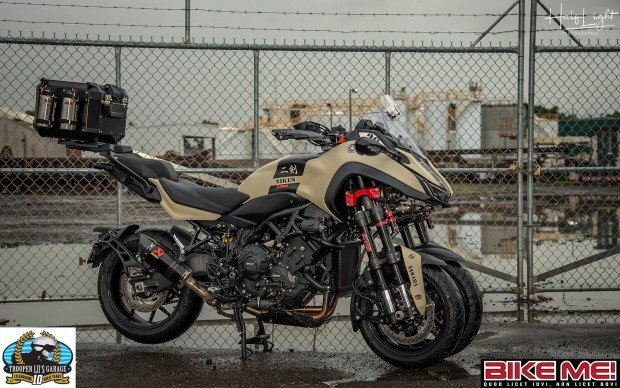 Harry and I left Sydney late on Friday afternoon. It was all my fault.

“So you’re gonna cover yourself in blood and excrement and eat my brains?”

“I’ll die hungry, bastard. Be at that place in Rosehill we know where the police never are.”

Of course, it rained. It’s rained on the last two shoots he and I have done.

Nick is English. There’s a connection. I’m sure.

I had picked up the Trooper Lu Turbo Niken from Justin that afternoon and spent an hour idling it through heavy traffic from Liverpool to Hooters in Parramatta, itching like a scabby dog to open that throttle and let it howl.

I could tell it wanted to. I wanted it to, too.

I will advise you all of just how much work as gone into this amazing creation when I do the actual review. I’m sure the details will astound you as they have me.

But for the moment, all you need to know is that the Turbo Niken is either a mild-mannered, easy-riding creature of covert evil, or it is a shrieking, tyre-eating, suck-banger that will have you twitching and whimpering in your sleep after you ride it in anger.

It just depends what you do with your right-hand.

So just keep that in the back of your mind as we go, OK? 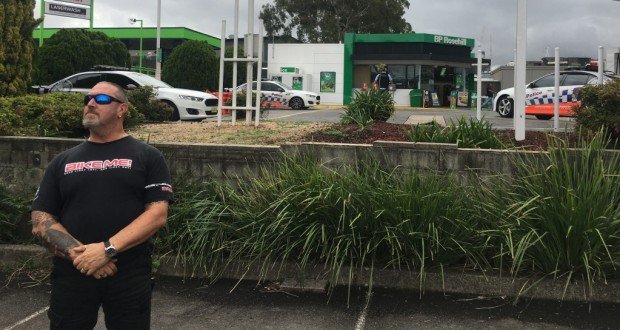 Three of them…just waiting for me to leave. 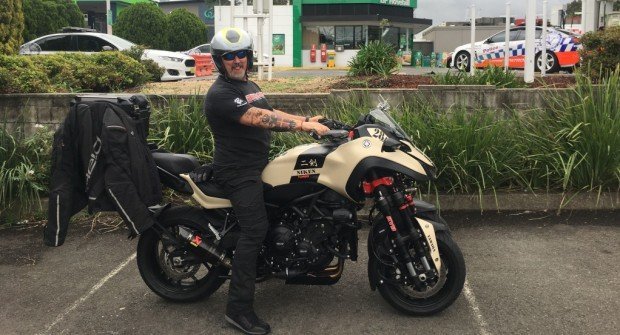 I felt it only right and proper to wheel out what they would be chasing.

We do the shoot. It’s suitably wicked. Lots of puddles and old buildings and seemingly abandoned plant. I resolve not to eat Edards’ brains on this occasion.

Harry and I set off for Singleton via the Putty Road after arranging to meet Nick at Jerry’s Café at Kulnura the next day and do the riding shots.

It’s five pm, we have an hour of daylight and two-and-a-half hours of riding. It’s not raining in Sydney, but it’s raining on the Putty and the road is greasy. The panthers, deer, wallabies, wombats, and musk oxen will be dewed with moisture when they run in front of us out of the darkness.

But Harry is young and brave – and on a barking MT-09. I’m old and stupid – and on a turbo-charged game-changer I’ve only ridden through traffic. This is a superb combination to fire up the Putty in the dark. 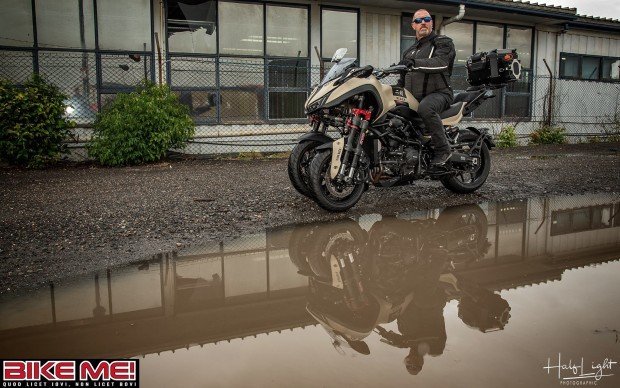 Come at me, zombies.

There’s a lot to recommend the Putty as darkness falls. The lack of police being one of them.

There is also much not to recommend the Putty as darkness falls. But you can work out what all that is.

It’s pretty much full dark as we belt through Colo Heights. Happily, I manage to tuck behind a bloke in a Hi-Lux who has a small sun bolted to his bull-bar, clearly knows the road, and is happy to run at 120 to 140.

Harry and I set to with a will.

The Turbo Niken sounds amazing. It sings harsh songs of barking hate out its Akro. I powershift through the gearbox and grin like a fiend through the water smeared on my visor.

The Hi-Lux sails past slower cars. Harry and I follow, using his killer lighting array that lit the road a kilometre ahead as our beacon of hope.

The Ten Mile was coming up, but I noticed Harry has fallen back a touch. He told me later he’d thought someone had flashed him, thought there might be cops ahead and slowed down. I buttoned off to let him catch up and the bloke in the Hi-Lux was gone. 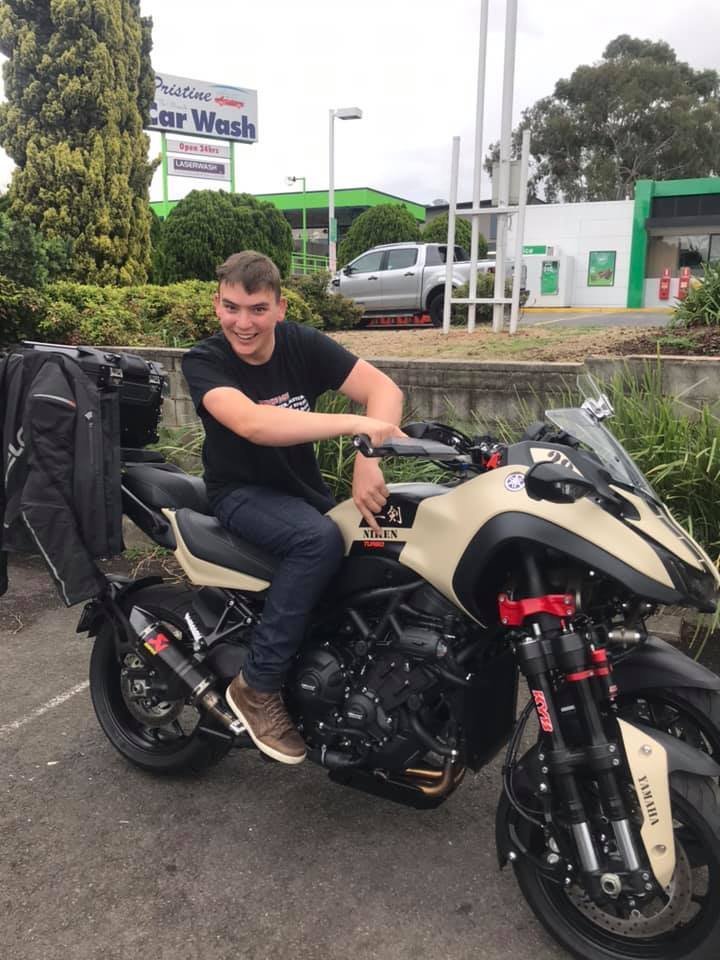 This was even before he had ridden it.

No biggie. Niken high-beam is pretty good. It’s wide and bright. It ain’t no 4X4 lightbar, but it’s all I had and it was OK.

We entered the Ten-Mile, the road reflective with water and the rain steady but not heavy. I felt the traction control doing its thing, praised technology, and passed a slow car.

Ahead of me was a Mobile Speed Camera car. It was doing 40. Sometimes it did 20.

Options? Well, overtake the revenue-raisers on double-yellows so they fill their pants with righteous indignation and maybe report by number-plate to a policeman whose genitals they’re fondling in the course of their work was certainly one.

The other option was to sit half-a-metre off his rear-bumper with all my lights on and work the Niken’s Akro hoping he’d drive into a cliff.

I chose option B.

Sure, the Ten-Mile was done a bit slower, but it was done with happy malice. And it almost worked. Old mate in the Mobile Speed Camera car was overcooking quite a few bends. But the Putty is pretty empty at night. So he was lucky.

Harry and I made it home, damp but pleased with not dying and our little bit of cheesy revenge.

The next morning I let Harry ride the Turbo Niken to Jerry’s Café via Wollombi while I took a Suzuki Boulevard.

The plan was to shoot them both in one day.

Nick was there, we had some food, watched the crowds form around the Niken, and listened to Harry sing the praises of the first turbo-charged thing he’d ever ridden. 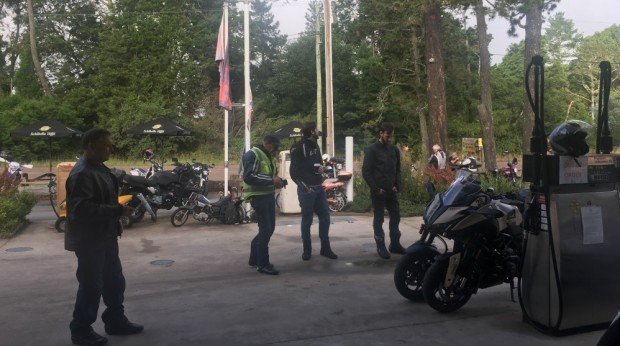 Harry started to do numbers on his phone, but I made him stop and we headed off to the nearby dam to shoot the pictures.

Nick shot some marvelous stuff. He invariably does. I resolved to hold off on the brain-eating. 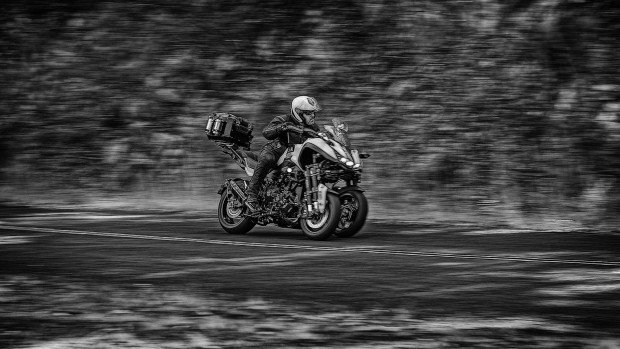 “There’s got to be one because turbo. It’s the last thing and then we can shoot the Boulevard.”

Nick duly positioned himself in an appropriate place, I had a practice run, then fired off a respectable smoker, turned around and realised the clutch had gone to Jesus. 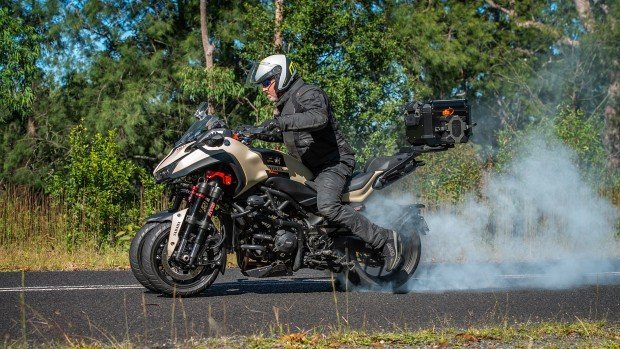 Jesus is waiting for the clutch.

Nick, Harry and I waited a while.

I started the Niken up, put it in gear, let out the clutch and realised the clutch-fever was terminal.

Justin had flagged the potential of this happening when I picked the bike up.

“I thought I felt it slipping,” he’d said. “But it could have just been wheelspin. Bear that in mind.”

I too had imagined there was some wheelspin in the hour or so I was belting it around for the pictures prior to the burnout.

I guess we were both imagining things.

So the problem was now this…

The Boulevard has no pillion seat. Harry’s bike is at my place, 120km away. Nick has a car. The nearest mobile phone reception is 20km away at Jerry’s Café.

The logistics were awkward.

“I’ve seen this thing on YouTube where one rider pushes the other rider with his foot using the footpeg,” Harry said while Nick and I stared balefully at the disabled Niken.

“You ever done that?” I asked Harry.

He shook his head. 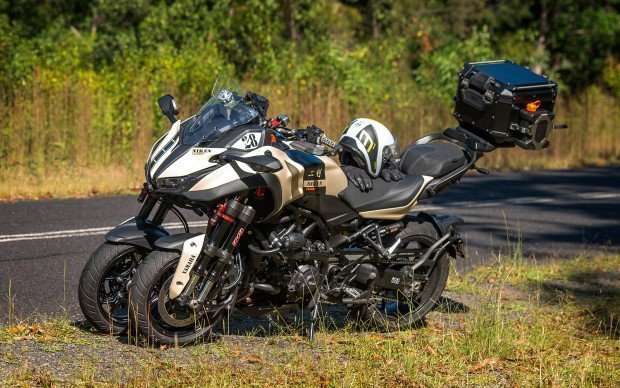 Like, if you were a cop, you’d put this in jail, right?