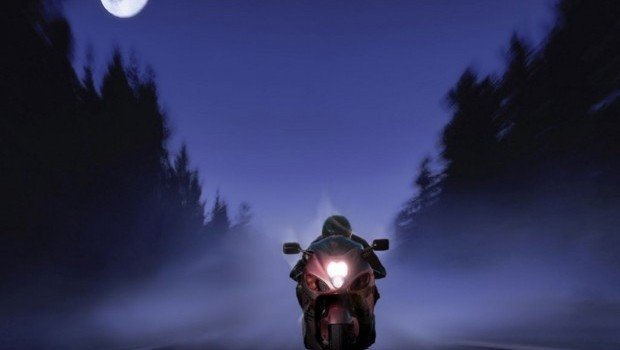 My mouth is dry. My heart has stopped beating and is engaged in bizarre arrhythmic bullshit more akin to a heavy metal drum solo than anything a living organ would concern itself with. My eyes stream tears, but I am neither happy nor sad. I think I’m scared. But I’m too hyped up on madness to know for sure. The wind smashes me relentlessly. Its force buffets me in long waves of heated hatred and it causes me to sway a little from side to side. This motion is mated to the crazed jouncing I’m getting from the over-stressed and now-inadequate suspension as it interacts with the road, struggling to fulfill its design brief. So I’m kind of oscillating. Vibrations of varying intensity assail me endlessly. They come from the engine, the road, the wind, the frame, the suspension… and are all fed by the frenetic explosions of fuel vapour somewhere south of my deeply retracted balls – and they run through me like ague. I dare not clench my teeth lest they shatter. My tongue feels swollen and obscene. I think I bit it at some stage, probably just as I was entering this frenzied speed-lunacy I now inhabit fully and completely.

My knees are struggling to grip the tank and my arms ache because my hands have seized into clawed horrors cramped up at the end of my trembling arms, fit only for keeping the throttle open on the right and hanging on for grim death on the left. I’m panting. I haven’t blinked in ages and my eyes burn and leak water simultaneously. I see nothing but the expanding road hurtling towards me. And it’s blurry and vibrating. Like the speedo I dare not look at. Its output is meaningless anyway. There is a point when the actual numbers it displays are irrelevant. That point was reached a while ago.

The noise is brain-crushing. The wind is an atonal mega-decibel scream. It’s louder than the bike, which is normally the loudest thing in my riding universe, but not at this speed. At this speed it is the wind that is loudest. It’s louder than the end of all things. And it is the song of my God. His song precludes anything and everything but reflexive reaction. Thought is not possible. Only a machine-like response to input. Slight changes in the road surface are instantly absorbed through my twitching body, computed in their absolute totality by a mind so clear and focused it is totally empty of thought. For there can be no thought. There can be only reaction. Like the reaction to these long, long sweepers that keep appearing. Sweepers I stopped backing off for a long time ago. Sweepers I react to by forcing myself forward into their arc as the bike starts to lean against the immense forces being unleashed against it; forces only just kept controllable by my pig-headed determination not to die.

They come at me, these sweepers, again and again – each one seemingly faster than the one before, but that cannot be the case. There is no more acceleration to be had. The throttle, the claw that was once my hand and the super-clarified grey sludge that was once my brain, have reached an end. We reached this end unknown kilometres back. Prior to that, I had come to the end of acceleration and stepped back. Again and again. Like a kid playing on the edge of a cliff. But then I didn’t step back. I stayed at the end of acceleration. And here we are now.

Speed and me and this thing that I know to be a bike, but which has since transcended that humble appellation and has become something else altogether. I made it that something else. I found a place where I could open the throttle, lean into the self-made ocean of wind this action generates, and, to paraphrase Hunter S, take the ride I bought the ticket for. And there are many such places in Australia. We are blessed with a vast country. If you’re being tortured by the police on the same old roads going to the same old places you’ve gone to for as long as you’ve been riding, you’ve really only got yourself to blame. The cops are only doing their jobs. Yes, it really is that prosaic. Stop bitching about it like smelly fishwives and simply remove yourself from the equation. Like I said, Australia is a big place.

But this time, like other times in the past and times yet to come, I’ve seen shit-all of it. I’ve been too busy forgetting to breathe, unable to blink, incapable of swallowing and empty of thought – but literally aflame with a purpose so pure it is an end in itself.

And then it’s over. A town appears in my field of view and the throttle claw relents. The bike instantly responds, but reluctantly, like I’ve cut off some vital feeder-line into its metallic soul. I smile. My leather-dry lips crack open. The beer I’m going to have in a few minutes will sting. But I will keep smiling for a long time.