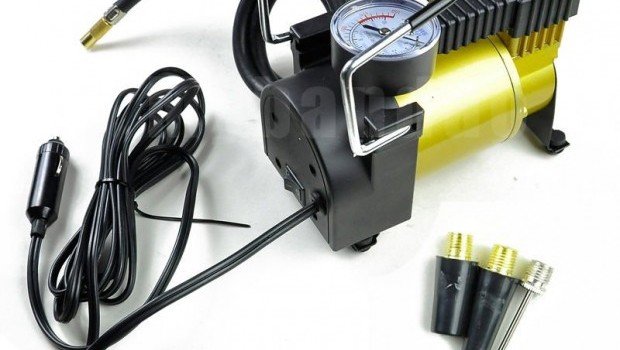 ROLLIN’ WITH THE PROS – Part II

“It just doesn’t fit,” Rennie said, jiggling the high-pressure superhose around the compressor fitting, while I held the air-delivery end on the tyre stem and warded the truck battery, which was now wired to the compressor. Everything was set to blast air into my newly-plugged tyre, if only we could get the air hose to click onto the compressor.

But it was pointless. No matter how much we swore at it, jiggled it, stared at it or picked at it with fingernails, the hose just would not mate with the compressor.

An hour-and-a-half had gone by since I plugged the BMW K1300S’s rear tyre in the staff garage. I was sweating like a bison and Rennie was totally devoid of happy thoughts. That will teach him about cheerfully agreeing to help me out with my shit in the future.

“I feel like a spastic,” Rennie breathed as we hauled the 30kg Lord of All Batteries and the recalcitrant compressor back to the lifts.

Tim was nonplussed as Rennie and I demonstrated our collective hose spasticity to him.

“It should click straight on,” he shrugged, rattling the airhose on the compressor much like we had been doing. “Maybe they supplied the wrong hose.”

Tim felt it was better to find this out here in the city than 300kms west of Uluru, and produced another compressor from the herd of compressors 4×4 was testing that month.

“I’ve gotta go,” Rennie said after we lugged the Lord of All Batteries and the new compressor back to the lift. “I’ll grab Deano.”

Deano joined me in the garage, hooked the battery to the new compressor, snicked the hose onto the fitting, handed me the business end and switched it on. The compressor hummed magnificently and air flowed eagerly out the end I was holding. Except it was not going into the tyre.

“The f**ken hose has this f**ken 15cm-long f**ken metal f**ken fitting on it,” I explained to Deano when he asked me why the air was whooshing into the air instead of into the tyre. “And I f**ken can’t f**ken get the f**ken thing onto the f**ken valve. Here. You f**ken try.”

So Deano tried. And also failed, which made me feel better about myself. We needed a compressor and an air-hose with a fitting that would click onto the tyre valve and not foul itself on the mag wheel.

“I’ll go back upstairs and see what else they have,” Deano offered. AMCN’s deputy editor is that rarest of all creatures, a mild, easy-going, affable bloodnut â€“ and he could see I was no longer capable of calm interaction with my colleagues.

“Thanks,” I said, pathetically grateful I would not have to pound the Lord of All Batteries into my damaged thighs again.

He was gone for 10 minutes, and returned with another vast compressor.

“This one has a shorter metal fitting,” he grinned. “It should work.”

Except it didn’t. It wasn’t short enough and wouldn’t fit square onto the valve, which for reasons I cannot begin to comprehend, was a vertical item instead of the clever right-angled one BMW had fitted to the front wheel of the K1300S.

“I’ll be back,” Deano said and left me to fume and drip sweat and plot the hideous demise of the Bavarian responsible for tyre-valve selection.

He was gone for a long time. So long, that I was seconds away from pushing the Lord of All Batteries under a car, hiking to the nearest bike shop and purchasing CO2 cartridges.

“This has to work,” Deano sang out as he came around the corner with yet another compressor. “It’s got a very small valve coupling, so it should fit. The only problem is that it needs to be plugged into a car’s cigarette lighter. Has the Beemer got such a fitting?”

“Then we need a car,” he declared.

I called the editor of Top Gear and the publisher of Wheels, whose test cars surrounded us. Voice mail. But Deano got through to the editor of Motor, who had a 5-series BMW we could use. And no, I could not find the durrie-lighter fitting in the boot where he said it would be. He should just be thankful I put the spare tyre back where I found it instead of complaining about dismantled fuse boxes and loose boot-carpets.

Deano performed a true tight-parking miracle with that over-computed Beemer pinging and beeping at him before I could utilise the lighter inside the car and coax some air into the rear hoop.

Four magazine editors, two deputy magazine editors, one feature writer and four compressors later, I wobbled out in search of a servo. Fifteen kilometres and three servos further on, I left the Shell in Leichhardt seconds ahead of the police who were coming to help me with my screaming-at-air-pumps issues.

Finally, my mate Paul at Bikescape came to my rescue with air after I remembered he was just across the road from where I was remonstrating with air-pumps. I owe him big time.