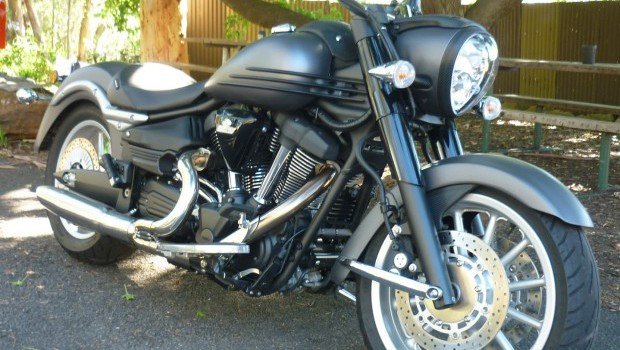 Boris insisted I take the BIKE ME! project XV1900 for a while. He knows power cruisers aren’t my cup of meat. “What about that Aprilia?” I asked him. “You will be riding the Yam”, he said firmly.

I had a beer with him a few days later. “That suspension’s a bit bouncy”, I said. “I looked for a damping adjuster, but I couldn’t find one.”

“Those mirrors are USELESS”, I whined.

“Shut up”, said Boris. “If you’re worried about what’s going on behind you, you’re not going fast enough.”

I do have to admit I had some hilarious times on it, though. As with most power cruisers, it’s all about the engine. This particular motorcycle has been modified slightly. It has a set of Denis Foran custom pipes on it, a custom seat with snakeskin detail, a RIP Graphics vinyl wrap job, a set of risers and drag bars, and tiny mirrors shaped like the tears of Mark Latham’s taxi driver. 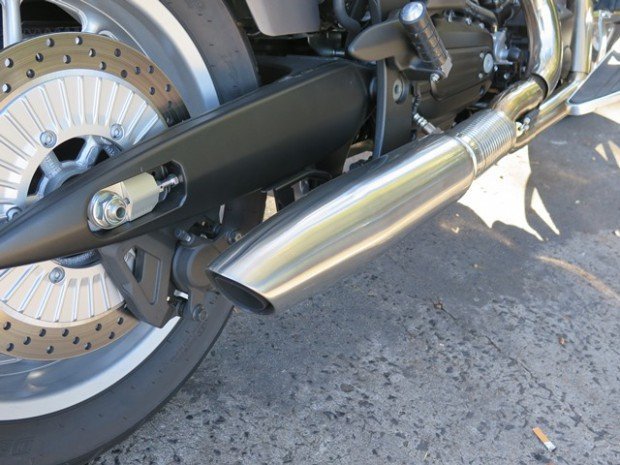 Okay, it’s not ALL about the engine. It’s a bit about style and presence as well. Those pipes emit a mighty, meaty note. The exhaust gases smite the air with authority whenever one gets on it a bit, and there is the light-sucking grey and the chrome and the hunched, foot forward riding position. Few things can make such a combination statement of “Look at me!” and “Fuck you!” Wearing a hijab, maybe. Riding the Grey V-Train is right up there.

But the engine is what grabs you by your viscera. It makes 155 Nm torque at 2500rpm. It redlines at 5000, and under that number that torque is EVERYWHERE. It’s geared tall, but it doesn’t matter. Every traffic light start is a win, and the sound it makes is glorious. There are five speeds, and they’re reasonably close together. I don’t know why they bothered. I watched the tacho early in the piece and sometimes changing into top made the revs go from 2,000 to 1,800. 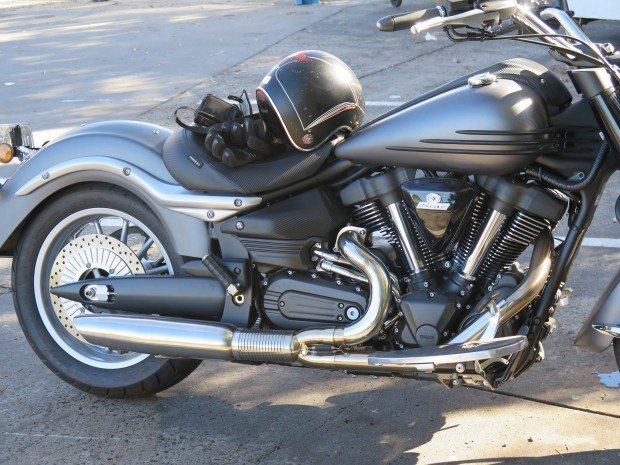 The engine is what grabs you

The pipe gives it a lean spot just off idle. I stalled it a couple of times when it was cold. When it’s hot, the exhaust crackles a bit as unburnt fuel burns in the pipe. Every now and then there’s a report like a pistol shot on over-run. Not a big pistol. Maybe a .32, or a 9mm. It is strangely satisfying, and makes small dogs and babies in prams whimper.

It handles like a power cruiser. The suspension is ordinary. It weighs over 340kg wet. Steering is heavy. It’s long. Wheelbase at 1715mm is about 200mm longer than a normal roadster, which means that it leans over further to go around a corner of a given radius. You think at first that ground clearance is okay, but it’s not. It’s a low motorcycle (seat height is just 705mm), with a tall undersquare engine, so stuff is close to the ground. And those footboards stick out a fair way. 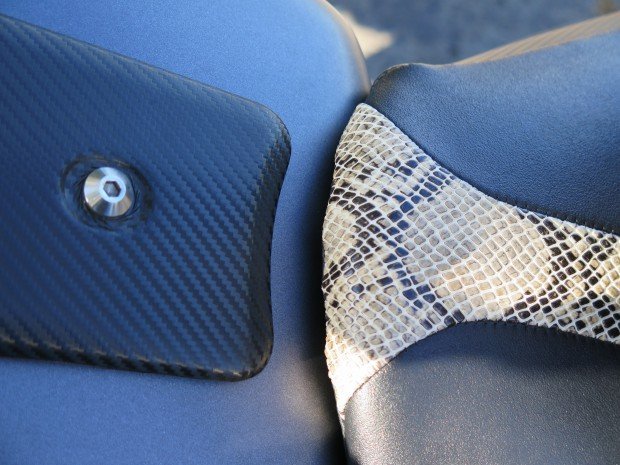 Not that it isn’t fun to impose your will on. There’s a certain grim satisfaction in using your shoulder muscles against the wide drag bars to hold a board on the ground through a smooth curve. Then you ease the throttle on and it makes that glorious bellow as it straightens up and gathers momentum.

Peak power isn’t all that high. Some of the engine design is pretty agricultural. It has pushrods, and hydraulic lifters. The Boulevarde, for example, makes more power because it revs higher thanks to DOHC and a light valvetrain. But the XV1900 makes it everywhere, as previously noted. You use it all the time. You hit maximum torque revs every time you leave a traffic light.

That’s about maximum noise, too. A man could be tempted to exceed the speed limit. 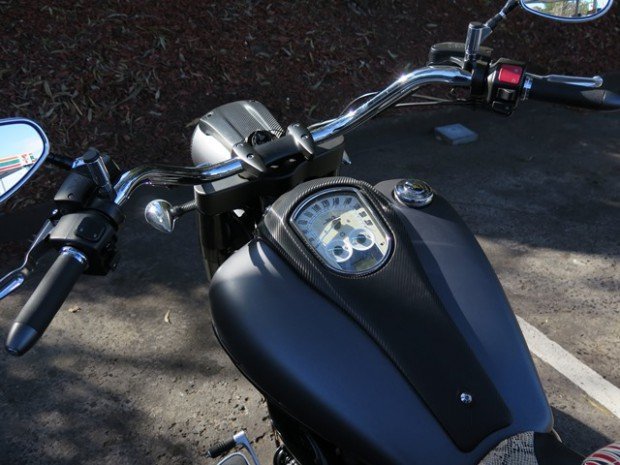 More of the RIP wrap

Out of the city, it’s tempting to turn it on just a bit every now and then just to hear that sound. It goes hard. In top gear. You’re sitting balanced and upright but with your feet out in front, and you’re not leaning on the bars like a sports bike or a roadster, so the acceleration tips you off balance and makes you tighten your grip on the handlebars, which increases the sensation of acceleration. Then you look down and find you’re going twenty km/h faster.

It’s not really a bike for long distances, though. The range on a tank is around 250-300 kilometres, but you will probably stop before that to stretch. The feet forward riding position isn’t as comfortable as it looks. It puts a bend in your spine down low, and it aches after a while. Hanging on to those drag bars makes you a windsock, but the arms raised and apart makes you look bigger, like a tomcat getting ready to fight. An important part of that dual statement, I guess.

The engine has two balance shafts. Despite those big 100mm diameter pistons, the vibration isn’t intrusive.

The instruments are minimal. There’s a big speedo with a small tacho, a fuel gauge and a couple of idiot lights in its face down low on the fuel tank. You have to move your head quite a bit to see it and you lose sight of the road, so you don’t look at it much. It adds to the image as well. You spend most of the time riding along like a boss, without a care in the world, with the occasional long stare down at your groin. 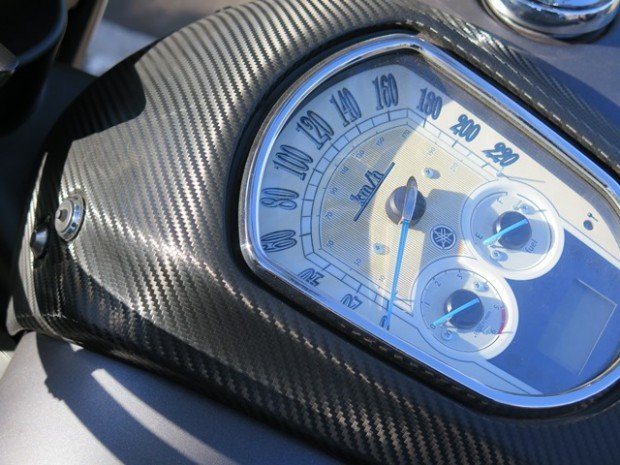 The clock is wrong. There’s a button on the front of the fuel tank. Pressing it does nothing. Unless you squeeze the trigger at the front of the left switchblock. Then it changes the time and stuff.

It’s practical. I know. Last thing I expected, too. I refer to servicing requirements. Hydraulic lifters mean no valve adjustments. Belt drive means no chain adjustments. Clutch is hydraulic: no cable to maintain. It’s air cooled: no cooling system to maintain. If you’re a do-it-yourselfer, maintenance will be a matter of keeping fluids and rubber up to it. If you pay for service, your mechanic won’t be getting rich off you.

Also, it sounds like a hog, hasn’t got Yamaha written on it anywhere you can see, and the engine kind of looks like a pan-head from the right.

The true believers won’t buy it, but Yamaha should snare a few apostates and cost accountants.

Also, a Yamaha tattoo hurts less than a Harley-Davidson tattoo.