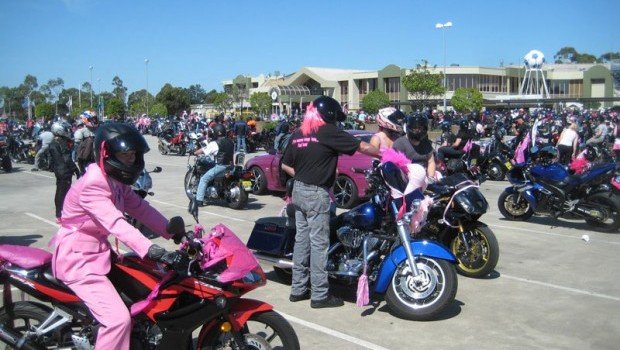 A long time ago I swore a grim and terrible oath. It was not in a graveyard, and it did not involve Satan or the blood of some hapless animal, but it was still a pretty damn good oath.

I swore, on the dusty bones of my long-dead ancestors, and the soft and loving eyes of my sainted mother, that I would never again, as long as the sun rose in the east and set in the west, go riding in a big pack of motorcycles.

My reasons were clear and unambiguous. The vast majority of people who attend these various mass charity/toy/protest runs simply cannot ride in a large pack and thus present a clear and present danger to me. At best I will rupture my pancreas laughing at what they are pleased to call “riding” and at worst they will mount me with their motorcycle.

I have ridden in many packs. The best and finest and funnest ones were outlaw motorcycle packs of about 20 or 30 bikes, the riders stinking of cheap strippers and crazed by drugs, violence and aggressive police pursuit, thundering as one tight unit along country roads at 170km/h.

The absolute worst have been those inane (and ultimately worthless) processions, parades and promenades that we, as motorcyclists, are occasionally given to.

As a risk assessment, I am far safer in a pack of 30 deranged gunslingers and pit-fighters riding elbow to elbow at speeds that are utterly inexcusable in a court of law. Safer than I could ever be in a pack of several hundred well-meaning Hogosysians or Ulyhogians or whatever the hell those anodyne cardigans choose to call themselves in these End Times.

This self-evident truth was rammed home to me when I attended the recent Pink Ribbon Ride in Sydney’s west. Now before the usual herd of outraged livestock start sending Shieldsy poorly written emails calling for my rendition to Egypt, let me just state that I think the cause is great. Cancer has taken up residence in my house, so the cause is searingly relevant to my family. Of course, that doesn’t mean that I’m suddenly prepared to abandon all human dignity and dress up like a cheap extra in Priscilla, Queen of the Desert. But we can explore motorcyclists’ bizarre penchant for cross-dressing another time. What we need to look at is the riding behaviour that occurs in these massive ad hoc packs that thrust riders of varying experience together and somehow expect them to negotiate traffic and each other.

As the pack left the carpark of the Marconi soccer club and wended its fluffy pink way to the Wallacia Hotel, my mate Ric and I made sure we were close to the front. Our reasoning was selfishly simple and clad in iron-bound logic. If we were up the front, we would be among the first in the bar when we got to the pub.

I do not know if the same logic drove a senior member of a prominent motorcycle social club to also seek a position at the front, but as the pack finally made it to the relatively open sections of the Northern Road, there he was in front of me.

He was complete with the faux outlaw vest with them wee patches, a nauseating vanity plate on his catalogue-customised Harley, and a girlfriend who waved vacuously at cars and sat astride the pillion seat like an impaled gnu. She reminded me of a mentally handicapped child I once saw waving at her parents from a merry-go-round.

I can only imagine he was too busy getting his bad-arse on to notice her signalling her love of all things bright and beautiful, cos apropos of nothing, he started doing these strange formal hand signals.

Now nothing makes me crazier than some idiot waving his arms and pumping his fists around his head like he was commanding a Special Forces assault on Tora Bora.

“Aaaarrgghh!” I screamed. “Stop that, you fucken sex organ! Hang onto your fucken handlebars and stop fucken pretending you’re the fucken Road Lord!” I don’t know if he heard me over the noise the wind was making as it whistled through his vacant head, but she heard me, because she turned and upon beholding the evil menace that is the Suzuki B-Czar growling and hating (as is its wont), decided against entering into a debate with it’s rider.

The pack, as it turned out, was bunching itself up ahead of us, as packs tend to do now and again when they encounter roundabouts, traffic lights or wandering cows. But why anyone would take it upon themselves to let go of the handlebars to make utterly meaningless hand signals in a group so large and disparate, is utterly beyond me.

Naturally, he wasn’t alone in his stupidity. Lots of riders were busily flapping their arms about and gurning at people in cars and generally not bothering to ride a motorcycle in a way that would encourage me to endanger myself in their company ever again.

After all, I did swear an oath.