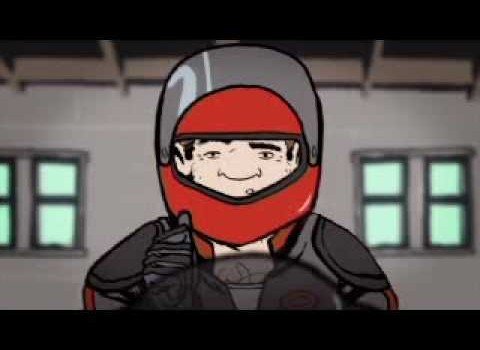 It’s about that animated commercial you lot have organised, and which I see every time there’s a MotoGP on. Which is unfortunate, seeing as how it causes me to throw up in my mouth a bit while simultaneously demanding I put my foot through my TV. I fight both urges heroically, but I can no longer sit in complacent silence.

Look, I know that you’re not, specifically, responsible for the content of the commercial. You just wanna sell insurance and obviously don’t know shit about motorcycling, and I cannot blame you for that. There are many motorcyclists who share your ignorance. I’m guessing, but I would think someone in your company commissioned an advertising agency to produce the ad, and then signed off on the finished product not knowing any better.

But once I have explained to you why this commercial is an insult to every motorcyclist with a functioning brain, I fully expect that same person to march down to the advertising agency, grab the mincing creative responsible for the ad by his product-impregnated hair and smash his face into the stout Tasmanian Oak of his agency’s boardroom table – repeatedly and with suitable ferocity.

For only thus will there be any redemption for you.

So don’t worry. Once we work through the issues of the ad, I’ll happily put your company on the right path to selling motorcyclists more of your insurance products. Because as we both know, that’s really what this is all about.

You want us to buy your insurance, yes?

But your insulting and downright stupid advert fails utterly in this regard. Treating motorcyclists as idiots is counterproductive. Ask a Victorian motorcycle lobbyist. Though perhaps asking people like that about motorcyclists is what led you to imagine that motorcyclists are all vacuous cretins.

That being the case, it’s very hard for me to understand exactly who your animated commercial is aimed at and in what alternate reality you imagine it would be successful.

“There are many advantages to riding a motorcycle” states the voice-over as we see an animated lantern-jawed fellow in an open-face helmet toodling along on a motorcycle. My interest is immediately piqued. Could this be a commercial selling me, a motorcyclist, a product that I need, want and cannot live without?

Apparently not, for with the very next statement, everything collapses into utter shit as the voice-over goes on to list these alleged advantages, to wit:

“Looking tough”, “Respect”, “Impressing the ladies” and “Freedom” (while showing the animated fellow illegally splitting lanes and briefly causing me to wonder if Swann Insurance would honour a claim that involved crashing while lane-splitting).

Let me now explain how immensely stupid, insulting and wholly unrealistic the commercial’s entire catalogue of premises is. Then you will come to understand why this commercial is such an epic failure. And why the advertising agency twonk who made it needs to eat oak.

“Looking tough” is not a by-product of riding bikes. In fact, the only motorcycle people who actually look like they could tear out your lungs and shit in your eyes are outlaw motorcycle club members. You’ll be fascinated to discover they normally eschew products like yours and are a very small minority in motorcycling circles. Most people who ride bikes are faceless (courtesy of a full-face lid) and look about as tough as a peeled egg.

“Respect” is another major assumptive failure. Motorcyclists are certainly not accorded the slightest respect by other road-users, to whom we are at best a mostly invisible road-stain, and at worst, an inconvenience that needs crushing under the tyres of mum’s 4WD.

“Impressing the ladies”? Stop it. Titanium Amex cards, Mercedes convertibles and holidays in the Seychelles do a much better job of that – and always have.

And finally we come to “freedom”.

Why do I have to explain to an insurance company that motorcyclists are no more or less “free” than every other member of our society? The same rules that govern every other road user under the Motor Traffic Act, also govern us. To pretend riders have a special freedom on the road while spruiking insurance at us is insulting and quite ill-conceived. Especially when that same insurance will reject my claim after I spear into the back of a school bus while seeking the freedom that only 200km/h in a 40km/h zone can supply.

You wanna sell me insurance? Then do this:

Don’t jerk me around approving any claims.

And don’t suddenly act like I’m a lying sack of shit when I am forced to make a claim.

Think of all the money you could have saved had you come to me before you got into bed with people who don’t ride bikes, to sell a product to people who do.