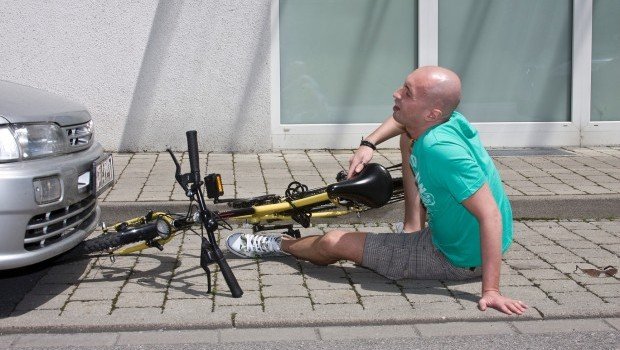 ONCE MORE FOR THE SLOW ONES

I trust you all know that all comedy is based on laughing at other people’s misfortunes. Mel Brooks defined it thus: “Tragedy is when I cut my finger. Comedy is when you fall into an open sewer and die.”

I have thus chosen to view the two published responses to my last column not as tragedy (though the authors are both rather dim and tragic souls), but as comedy. Because both Tony Fox and Maurie Esler (Access Vol 56 No 11) are about to fall into an open sewer of their own making and so provide us all with a bunch of laughs.

Rather than pose a counter-argument to mine, Tony chose to use infantile sarcasm instead of adult reasoning to NOT make any valid point at all. Had he found someone to explain my article to him, he would have discovered his comprehensive skills are akin to those of a gnu. My argument about pushbike riders was not at all validated by the “they don’t pay rego” argument. They don’t, of course. Nor do they pay tolls or licence fees, and thus getting them to obey any road-rules whatsoever is a waste of time – but that was hardly the point.

Tony also fails to grasp certain issues about tax, and attempts to equate rego fees with speeding fines. I could walk him through the foolishness of this comparison (one is a mandatory fee imposed by the State government on the a vehicle’s owner and one is a penalty imposed on the road-user for breaking the law), but I live in hope he’ll be able to work it out for himself. He did manage to work out how email operates, so all is not lost.

He did get my “utter contempt” of pushbike riders right, but that was a real gimme, wasn’t it, Tony?

The second hilarious tragic to drop his pants in public was Maurie Esler.

Maurie quite rightly eschewed sarcasm, and chose instead to appeal to what he must believe is my spirit of humanity.

“Shouldn’t the strong stand up against the weak?” he bleated and went on to seek guidance in the raising of his children. He also wanted to know “Should pedestrians be able to use the roads?”

Both of these intellectual titans (Maurie, do you really think pedestrians should be free to wander the verges of our freeways, or do you think they may be happier staying on the footpaths?) have utterly failed to provide a meaningful response to my over-riding contention regarding pushbikes.

So here it is once again (and I’m happy to hear proper adult arguments to the contrary, if any exist)…

Pushbike riders who choose to ride on freeways and major arterial roads, and place the onus of being seen on car drivers, are imbeciles of the highest order. Their inevitable demise under the front axle of a fat mum’s Prado is a given and can only be of benefit to humanity as a whole.

Whether they pay rego or obey road rules is a side issue. The fact that they place a one-manpower exercise tool incapable of running with the flow of traffic on a major road, then cloak themselves in the sad egotism of the mentally deficient, only strengthens my argument for having them charged with Criminal Negligence and beaten like runaway slaves.

Why people like Maurie and Tony can’t grasp this, is anyone’s guess. I could assume it is the oestrogen in the chicken, but who really knows?

Understand this – as a motorcycle rider you are responsible for yourself. You are astride a machine capable of getting you out of trouble (as well as into it) with the rest of the traffic. Putting the burden of you being seen by dopey car drivers on dopey car drivers is just ludicrous. They won’t, can’t and don’t. You know that.

So why should pushbike riders be allowed to scream “Victim!” when they make an informed decision to ride on a busy arterial road astride a contraption that cannot even stay with the flow of traffic, and become hood ornaments as a result?

They shouldn’t, but they do – and to my incredulous amusement, mongs like Tony and Maurie scream with them. They scream loud enough to command immense allocations of your money to keep allowing them to place themselves in harm’s way – maliciously, arrogantly and stupidly.

If you have trouble coming to terms with that, or seeing the painful sense of it, then that’s not funny.