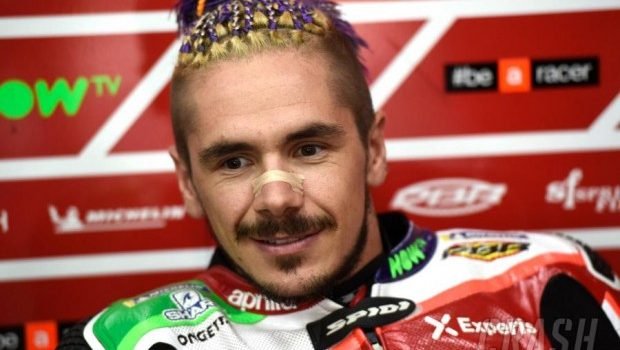 “Of course, the Criminal Redding is weak like a woman, but the shoulder of the Horse-Mouth is even weaker and made of cigarette ash, like pequeño Pedrosito, whose bones explode whenever a motorcycle engine starts!”

Has that crazed Criminal Redding been dragged off to prison in chains yet? I am heavily armed and I will shoot to defend myself if he tries to touch me. But I will have to use my right arm because my left arm aches like the branded rump of a glue-horse.

Did you see what that slut-haired madman did to the grinning Horse-Toothed Puta? He grabbed him and tore his shoulder out of its socket! Of course, the Criminal Redding is weak like a woman, but the shoulder of the Horse-Tooth is even weaker and made of cigarette ash, like pequeño Pedrosito, whose bones explode whenever a motorcycle engine starts!

It was terrible to see. Madre de Dios! I thought he had killed him! And on the very day he allegedly won the championship I can still win if only Dorna would co-operate with my expectations. 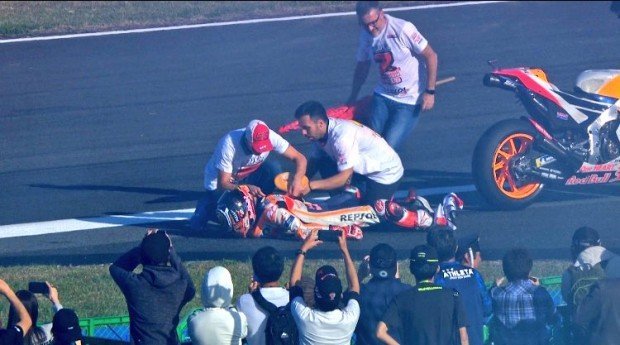 See how he lies like a broken doll after Redding’s attack! this could have been me, Gigi!

I mean, it would have been terrible if the Criminal Redding had killed him, and I would have mourned for minutes. I would have probably sent flowers – well, I would have told you to send flowers – but it was bad enough without there being the need to arrange a funeral.

I thought, OK, if he is dead, then I will take the mantle of my championship a few races early. But then I thought what if the Criminal Redding is killing champions? He will come for me also! I must arm myself and hope he goes after the yellow Puta first!

But then, when I saw how many of those teeth appeared when he climbed up on that stupid red box and started to play a video game from the 1800s, I almost felt bad the Criminal Redding failed.

What happened to gracefully jumping into an open sewer-pond with all your leathers on as I once did? What was wrong with making the heroic sign of the Victory Mamba as he rode with dignity around the track like I always do? Of course, he can only make the sign of the Veterinarian Shitting Horse-Teeth because the Victory Mamba is my special thing, but you understand what I am saying, don’t you, Gigi?

I will speak to him when I am furnishing my larger area in the Repsol Pit Palace of Superb Spanish Champions next season when I am the Supreme Respol. I will draw him pictures of how to behave with grace if he does not understand. Well, I will tell someone what to draw because my drawings are so superbly detailed it will take too long for me to do it.

I think I will miss you here the most. You did many excellent drawings under my direction. Do you remember that one you did with the spear that went through the Yellow Puta’s face? That was one of my favourites. It is still on my motorhome’s toilet door.

Can you now draw me a picture of the Criminal Redding, blistered by pepper spray and screaming under a big pile of Japanese police dogs? Jail is too good for him, I think. After all, he is not that nasty old UFC fighter, Way N’Gardnah, is he?

Or, if you cannot find the time to do that, then please go and beat on the door of our weeping idiot’s hotel room with a garbage can, show him the can, and tell him that is where his career belongs. If the Sad-Eyed Super-Puta cries any longer his eyes will fall out and he will have to tie a seeing-eye dog to his stupid Ducati. He crashed. Again. So what? Like he’s not used to it by now?

So we have cancelled the race on Seagull Island then? Good. I cannot be there, so there would be no point in having anyone else go.

I think I will go back to Spain now. Maybe see a few movies and catch up with my two insatiable fans. They can take turns massaging my sore arm and reciting the poetry I have written for myself out loud.

Aaaaaa-eeeee! It is him! Get away from here, you burro de mierda de pelo morado! I have Holy Water and a gun! Gigi! Come at once, he is looking in my window! His eyes are full of blood!