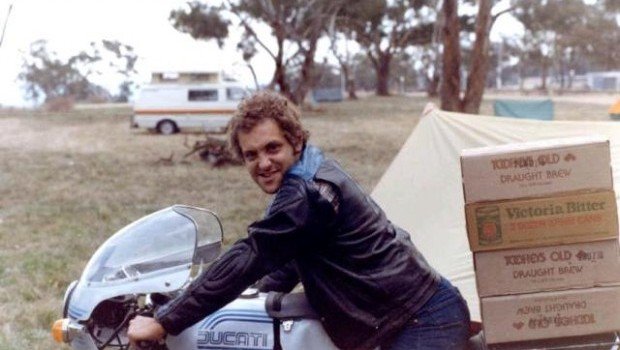 Nothing left the Mountain unscathed – no matter how much respect you think you or your exotic bike demanded. 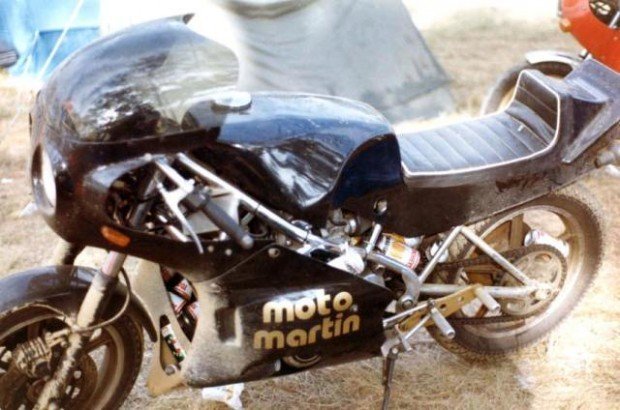 Pic 11. A luscious Moto Martin made a very smart rubbish bin for the environmentally conscious. 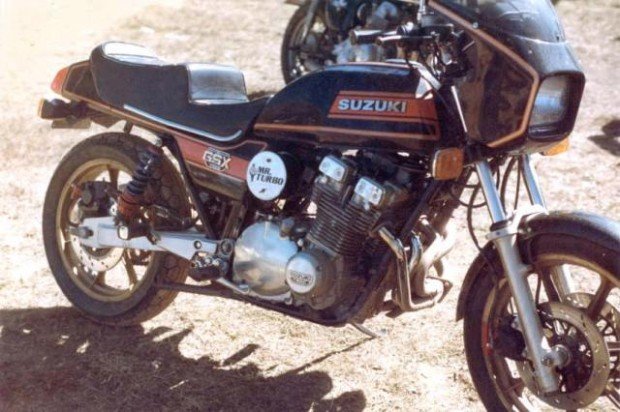 Pic 12. In the early 80s, turbocharged bikes were very few and far between. I photographed this because I had one just like it – minus the turbo, the extended swingarm and stepped seat.

The first year I went, I camped with these blokes. I didn’t know them, but they appeared next to me when I woke up. They said they were the Laverda Owners Club and pointed to the orange Jota they had with them – the only Laverda in the club at that stage. I wish I could remember their names, but I’m sure  they’ll understand and forgive me. 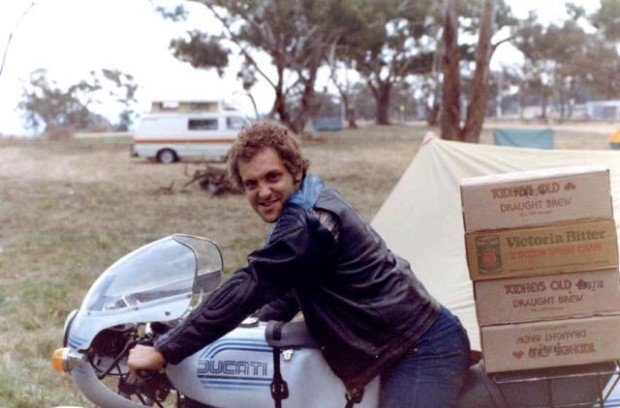 Pic 13. Four cases was the standard load for a beer run into town. It took me three years before I was brave enough to attempt 10 cases in order to win a $50 bet. I won the bet, but snapped my sub-frame. 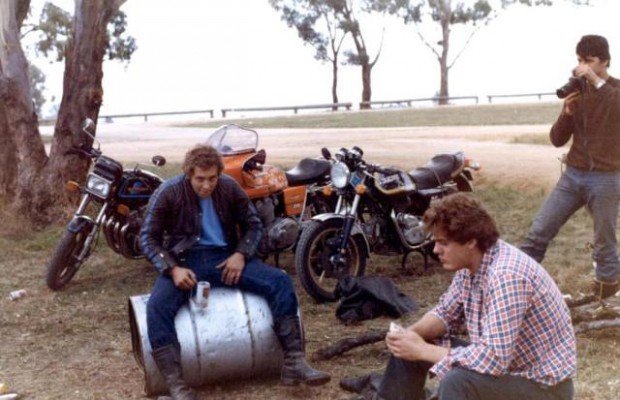 Pic 14. Morning was always a good time for quiet introspection and photos. 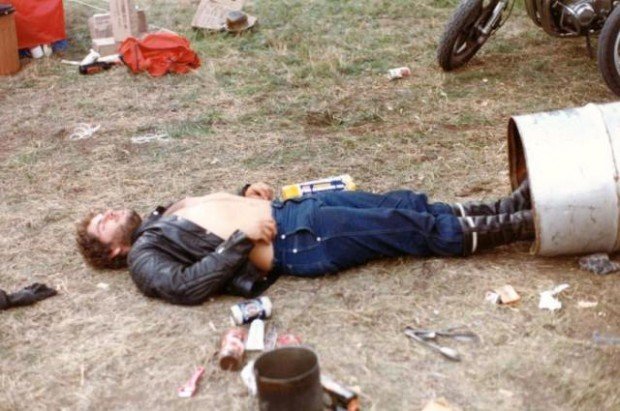 Pic 15. On occasion, people would climb into garbage bins, which were tipped over by helpful drunks. Sometimes concussion was the result. 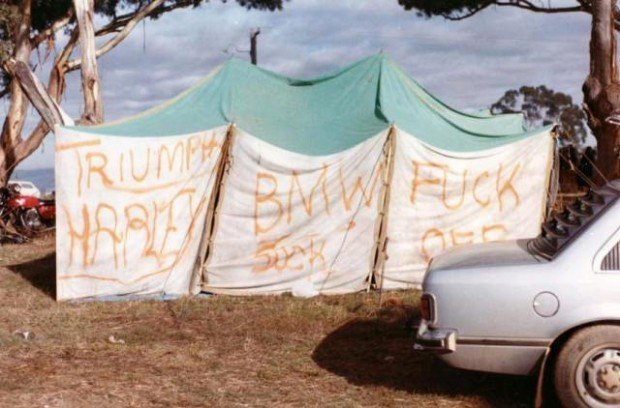 PIC 16 This was referred to as The Tent. I never went there. It was full of very large tattooed drunks with great beards and loud voices who called everyone “cunt”. By the time I became a large tattooed drunk with a beard, it was too late to take it to the Mountain.

Leo was and is a very dear friend of mine. He was one of the craziest fuckers I’ve ever met and had the ability to scull a bottle of Green Ginger Wine in under 30 seconds. He sustained brain damage in the late 80s when a truck ran over his head in Marrickville and moved to Queensland for a quieter life. 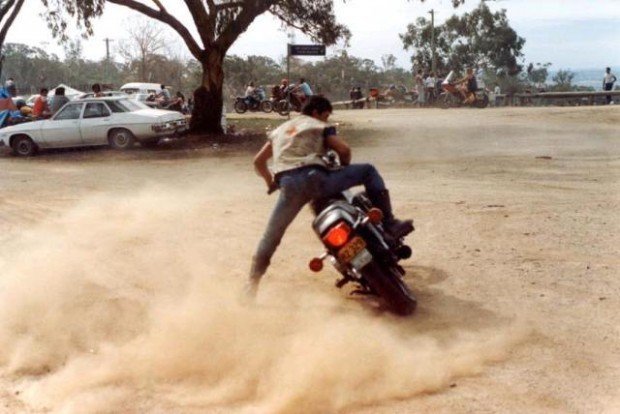 PIC 17 This was Leo’s first crack at a donut. 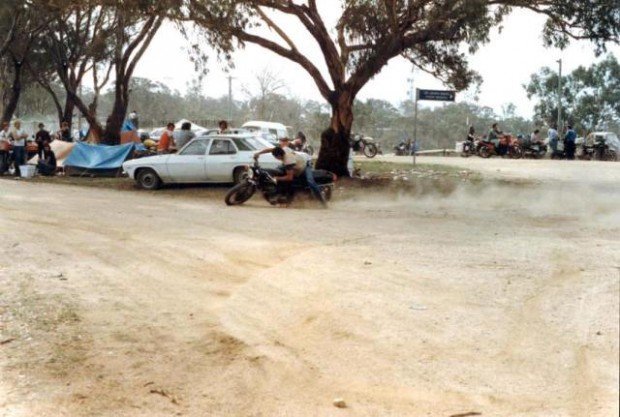 PIC 18 It was also my first attempt at time lapse photography. 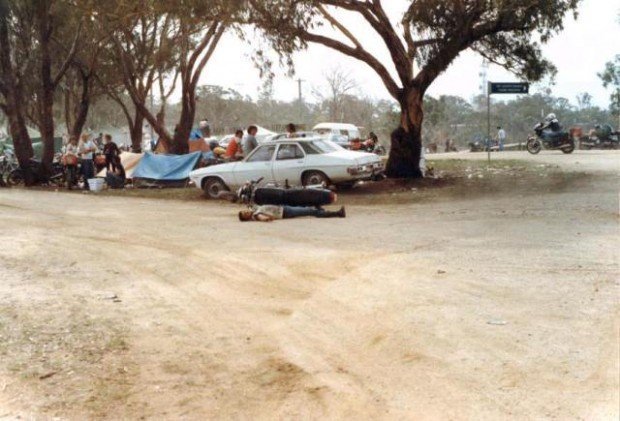 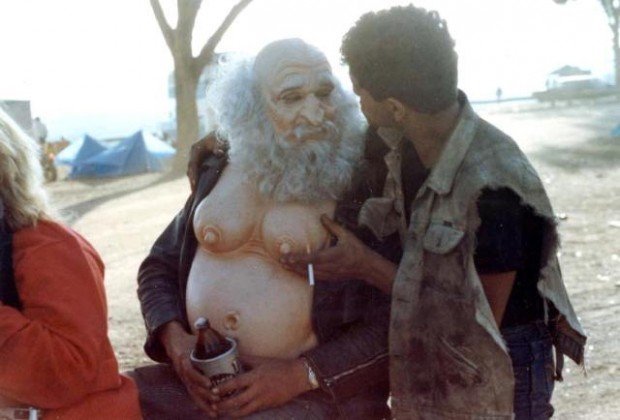 PIC 20 Leo was a friendly bloke and people would gravitate to him. All kinds of people. Leo didn’t care. He loved them all equally. 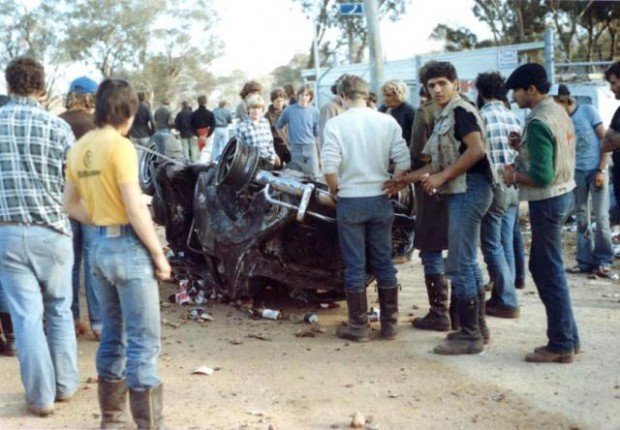 PIC 21 This was the notorious burning Volkswagen being examined by Leo the morning after the night some crazy drunken people tried to roll it into the police compound (which you can see in the far right of the photo). I hold myself fully responsible for that. When the Volkswagon was first torched cos it ran over a couple of bikes, the vengeful crowd made an earnest attempt to roll it up a tree. In one of those surreal moments that occur in all places of blind madness, the crowd fell into an uneasy silence when their efforts were coming to naught. A strident voice rang out through the hush. “Take it to the compound!” roared the voice. And so it came to pass, even though I never imagined anyone would actually listen to me.

Part 3 and the final installment here