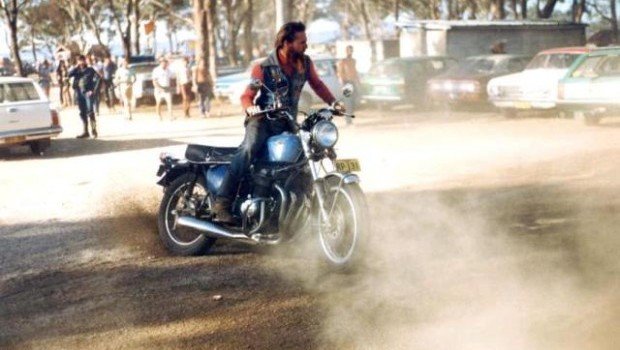 FOR many older bike riders, the annual Easter long weekend races at Bathurst’s Mount Panorama are nothing but a series of insane memories. For those who really gave themselves over to the Mountain’s magic, those recollections are probably very disjointed and bizarre. Like mine.

But the one prevailing memory that remains with me to this day was the incredible feeling of belonging to a very special part of Australian society. I would imagine that Genghis Khan’s Mongol hordes shared a similar feeling whenever they were encamped en masse somewhere.

It would be fair to say that those Easter weekends squatting at MacPhillamy Park were formative for me as a rider. They shaped my views about bikes and bike riders for the rest of my life.

No-one was sadder than me when it all came to an ignominious end following the Great Last Riot late in the 80s (See? I can’t even pin down the year with any certainty?) which lasted for nine hours and was fuelled by the advent of methyl amphetamine for the very first time — a very different affair from the preceding years’ much shorter and less manic stoushes.

Something intangible died that year on the Mountain.

But I still have great memories, some of which I even managed to capture on film…

The seminal highpoint of any given hour atop the Mountain was the Bullring – basically a gathering of people at one of the corssroads formed by the many dirt-tracks in the campground, who would watch men dancing with motorcycles.

They would start spontaneously and end just as abruptly – usually and miraculously without major injury to both spectators and performers. 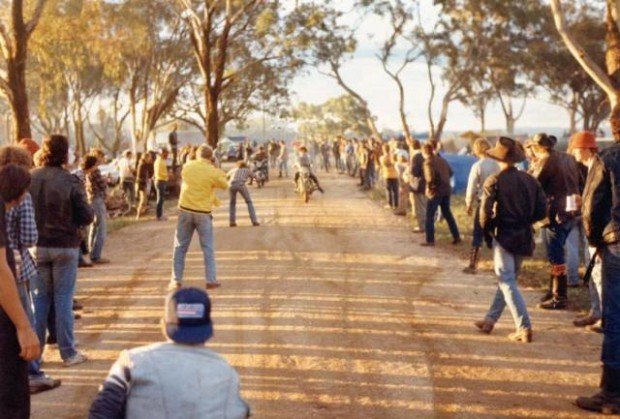 Pic 1. Dirt drags were an extension of the classic Bullring, but more problematic, ‘cos the drunks would wander in front of your speeding bike to get a closer look/take a photo/see how big your balls were, than the normally static drunks at a bullring 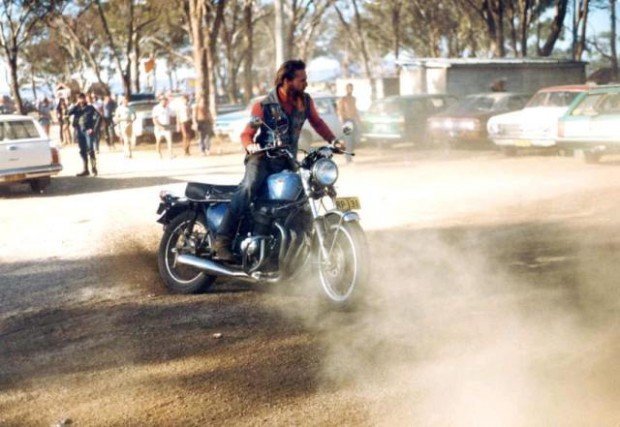 PIC 2 This bloke and his Honda Four were sensationally stable and accurate in their pirouettes. He was probably doing it sober, and therefore cheating. 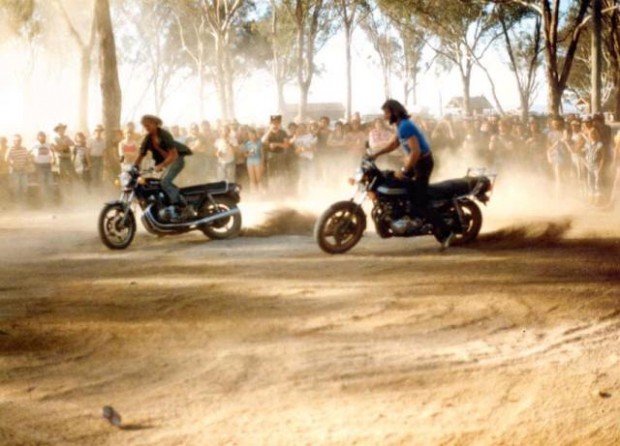 Pic 3. The Pas de Deux – or double act, whereby perfect synchronisation in turns was sought by the performers, and if attained, brought many coolness points. 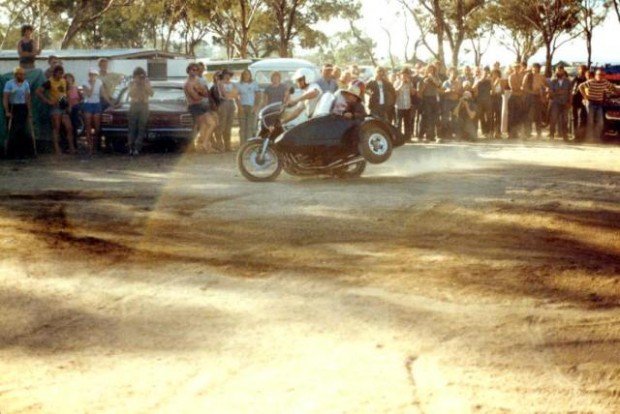 Pic 4. Sidecars were normally treated with contempt, but getting air with the chair was mandatory if you didn’t want people to curse your mother out and call you a poofter. 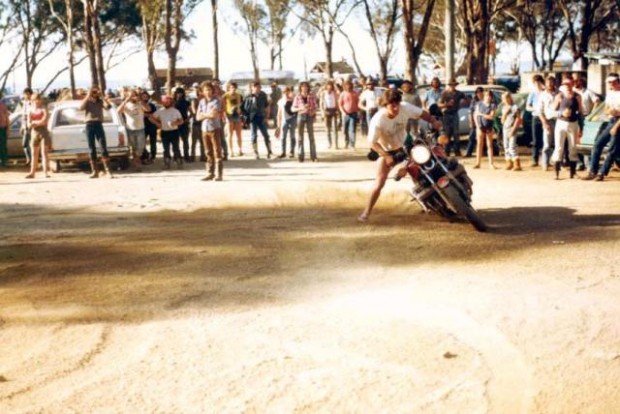 Pic 5. The impossible was always probable on the Mountain – a six-cylinder CBX doing quality circle-work with a man wearing thongs in charge. 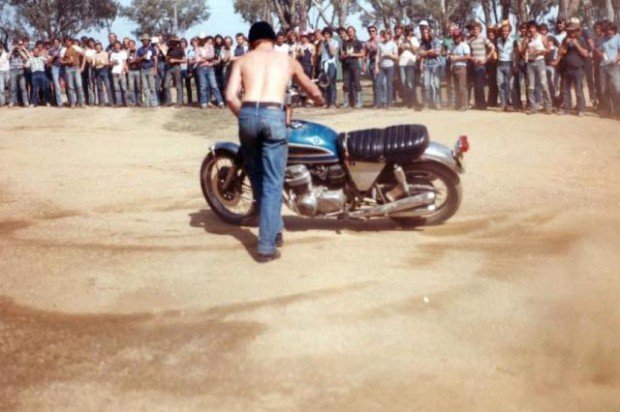 PIC 6 True masters could always step off their bikes and walk beside them. Once again, the mighty Honda Four showed class and grace throughout. 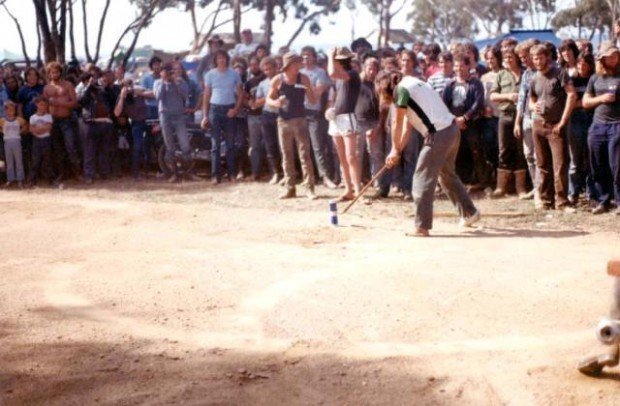 PIC 7 Impromptu displays of golf drives were always greeted with shrieks of disdain by the watching crowd, unless the flying can hit you in the face, in which case you let others do the yelling for you. 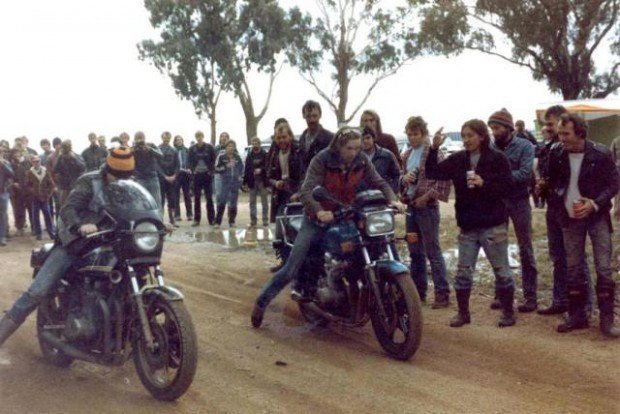 PIC 8 The start of a drag race is always the most tense of times. Here, my good friend Knackers (he’s the one with the raised hand and beer, as opposed to all the other bastards with beers and lowered hands) offers advice to the man in Lane One. From memory it was: “GERRUPIDYAKAAARRRRNNNN!!!”

When it rained (and it did now and again), water sports suddenly surged to the forefront, and added an entire new aquatic dimension to having fun on bikes. 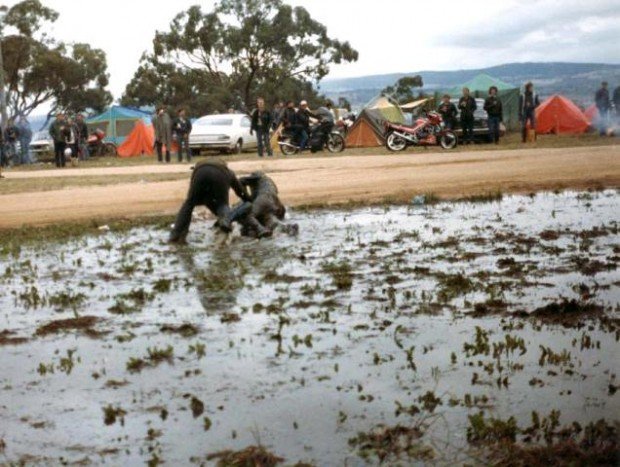 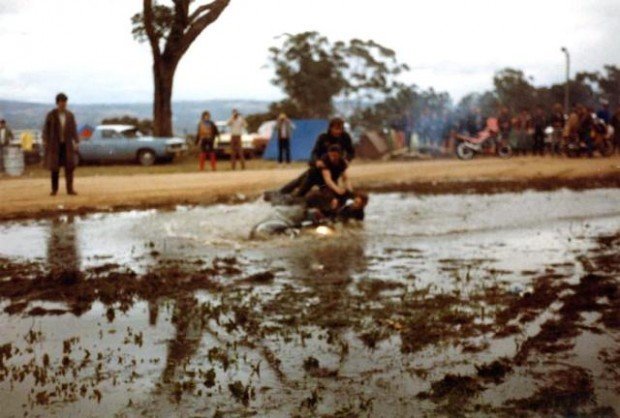 Continue on to part two here