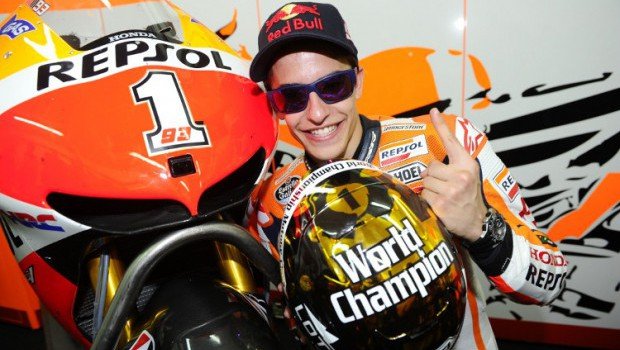 So, another MotoGP championship has been run and won. The victor has the silverware, the vanquished have a bagful of excuses to explain why their bikes weren’t good enough to win, and another bag of promises that next year’s bikes will be better, and they’ll be back hungrier than ever.

Ordinarily, everyone would be heading home for the Christmas break by now. But this year, the season is over after only seven rounds, and they’ll be going through the motions for another five months.

2014 was expected to be the toughest most closely-fought championship battle ever. It hasn’t been. The Marc Marquez war machine has marched through the first seven rounds leaving nothing but scorched earth in its wake. 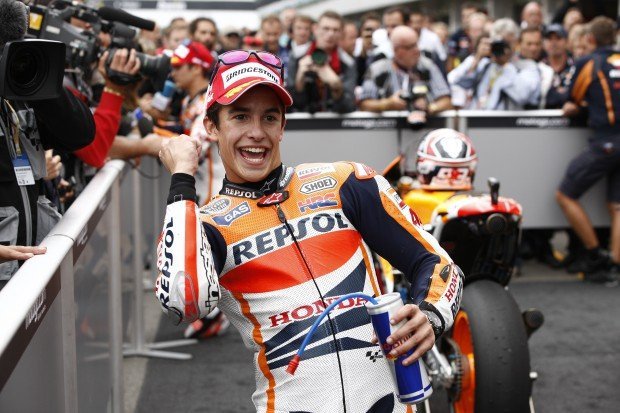 The 2014 MotoGP highlights package will look like a game show, where every week someone lines up to have a crack at defending the champion. Rossi had first shot in Qatar. Pedrosa had the next attempt in Texas. Lorenzo had a crack at Mugello, and the results have all been the same. Le Mans was a masterclass, where Marquez magnanimously dropped back mid-field to give everyone else a sporting chance, then methodically dispatched the lot of them and won comfortably. 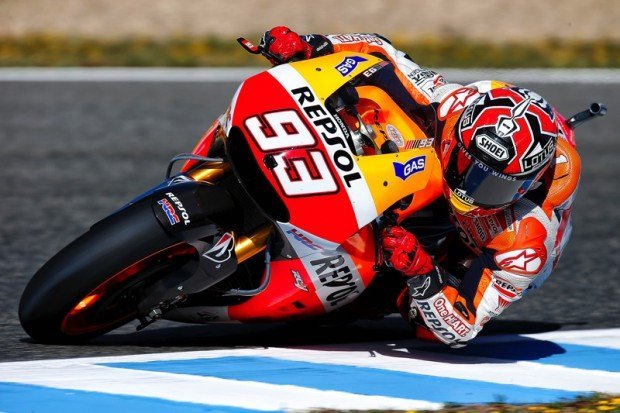 “Maybe I should slow down some…nah, fuck it.”

At Catalunya this week, Rossi and Pedrosa upped the ante by double-teaming him, but despite taking it right down to the wire, they couldn’t knock the champ down. In an act of sheer desperation, Pedrosa reached up his sleeve and pulled out a card he hasn’t played since Estoril in 2006, but the champ was stronger than Nicky Hayden, the last team-mate Pedrosa tried that ramming shit on.

The effect of Marquez’ superiority over the field shouldn’t be underestimated. Pre-season dominance and its immediate translation into crushing race victories have caused his competitors to re-evaluate their expectations. 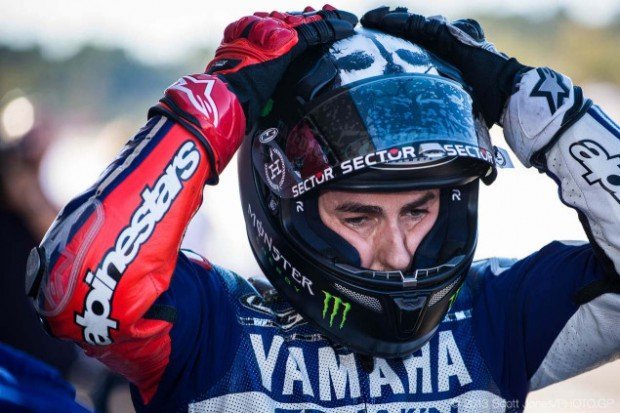 “There’s this buzzing in my head that won’t stop…”

The main victim is Jorge Lorenzo, the assumed title contender, who at this point has less than half of the championship leader’s points and often struggles to keep up with the leading group, let alone compete for the victory.

Lorenzo’s championship hopes didn’t die in the dust at Qatar. They wilted but still didn’t die when pressure induced a brain-snap on the Texas starting grid. Jorge Lorenzo’s 2014 championship aspirations were ultimately snuffed out at Le Mans, where on equal terms he couldn’t match the pace of his team-mate, or compete for the podium. His distant sixth nailed that coffin good and properly and gave him more time to focus on the inane hashtags he bombards social media with. Expect to see #howisthisbastardsoquick, and #imtiredofhavingmyarsehandedtome. 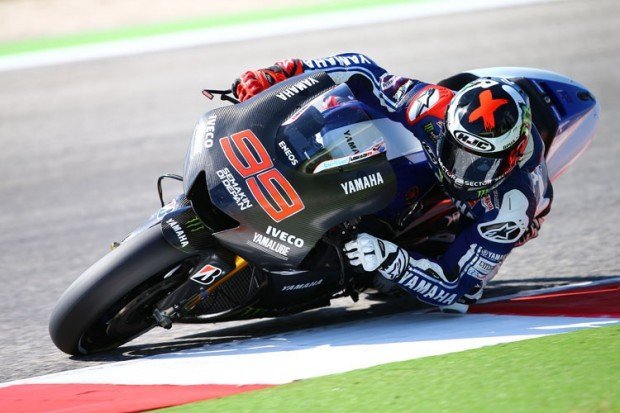 “Damnit! There’s another bug on my visor!”

His resurgence at Mugello was great to see, but there always existed the sense that Jorge didn’t truly believe he could hold Marquez off. His frustration with the bike has taken a toll, and we’re seeing a new face. Complaining about his equipment and betraying a sense of defeat is uncharacteristic for Jorge. For that matter, it’s uncharacteristic of a true champion. There is no conviction in his complaints about the Yamaha and it fractious relationship with tyres, because whenever he’s struggled, Rossi has been up ahead fighting for the lead. When the season packs up after Valencia, Marquez will have as many MotoGP titles as Lorenzo, from only two seasons competing. Lorenzo won’t be considered the best rider in Spain, let alone the world, and his short reign will be cramped in-between the two eras of supreme dominance of Valentino Rossi and Marc Marquez. The remainder of the 2014 season promises to be purgatory for him, so a return of his fighting spirit and a couple of victories would be great for the sport. 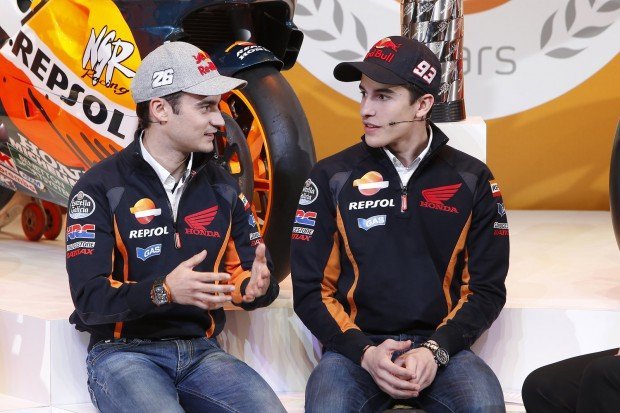 “I was gonna poison your water, but it probably wouldn’t make any difference.”

Maybe Dani Pedrosa has come to terms with the fact that he’ll never be MotoGP world champion, or perhaps it’s the absence of Puig wielding the cane in the Repsol garage, but Pedrosa looks happier this year than he has at any time in the past eight seasons. The filthy scowl of defeat has disappeared, and he seems to genuinely share in the team celebrations of Marquez’ victories. Somehow, he looks happier coming third or fourth now than he ever did coming second. With access to the same machinery, and team data, Pedrosa has a better perspective on Marquez’s speed than anyone else, and he seems to have accepted that brilliance and resigned himself to being the number two rider. 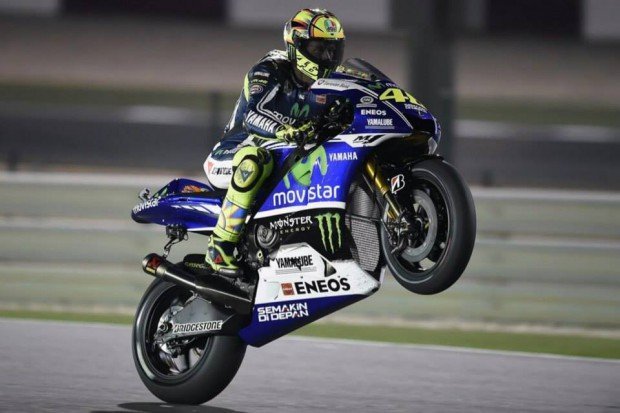 “Maybe if I drop the front-wheel on his head…”

Valentino Rossi, with the contentment only seven premier-class titles could provide, is satisfied to play second fiddle to the new maestro. Having been on the other end of this type of crushing dominance, and generally outpacing his more-fancied team-mate in the race, if not qualifying, Rossi has nothing to prove. Regardless, he will continue making Marquez work for his trophies, and there is nothing MotoGP fans want to see more than Rossi and Marquez battling for the lead of a race. 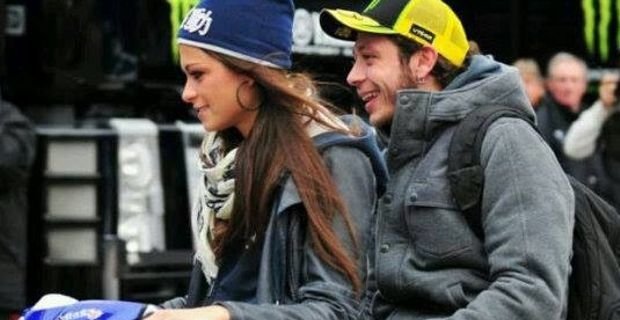 The other revelation of the early season has been Cal Crutchlow. Nothing to do with his riding, but the fact that he’s somehow surprised at the lack of performance of the Desmosedici GP14. Seriously Cal? This is the 2014 evolution of the bike that Casey Stoner and Valentino Rossi are still trying to disassociate themselves from, and your former team mate Dovisioso rode to mediocrity in 2013. How can you be surprised, Cal?

It’s convenient to say Crutchlow succumbed to greed and took the Ducati money so he deserves the compromise in performance, but it’s not as simple as the money for Cal. This is the factory ride he coveted. Overlooked for the factory Yamaha ride when the prodigal son returned from his Bologna experience, Crutchlow had more confidence in the potential of a factory bike than the Tech 3 hand-me-downs. 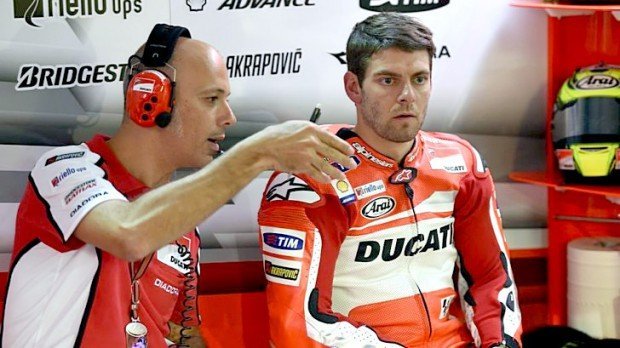 “Yes, they will all be in front of you again. It is how we roll here.”

The writing was on the wall when Ducati threw up the white flag before a wheel was turned in anger, conceded they weren’t capable of playing with the big boys from the Japanese factories and opted for the concessions in the new regulations. If the reality of the situation wasn’t apparent to Crutchlow before, that decision should’ve rammed it home to him. The irony of leaving a French team to join one that surrendered in the face of adversity surely can’t be lost on him. Regardless, the 2014 Desmosedici is consistent with its recent heritage. At their home race in Italy, being outpaced by satellite bikes was so frustrating for Crutchlow that he threw his bike at Bradl. Unsporting, but apart from brief glimpses of speed by Dovisioso, Ducati is destined to spend their time fighting with teams who operate with a fraction of their budget, so he should get used to it. 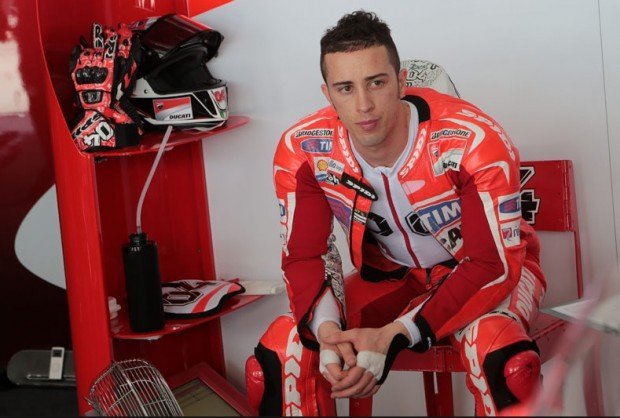 Down the field, no one has stood up and proven themselves capable of progressing to fight at the front of the pack. Bradl is consistently inconsistent, rarely delivering on his potential over the course of a race. The same applies to Bautista, and both occasionally deliver strong podium results that only indicate what they should be able to produce consistently.

Both Espargaros have delivered mixed results, but Pol demonstrated in Moto2 that he’s a gradual, consistent learner, and will be much stronger later in the season. He’s comprehensively outperformed his more experienced team mate, and will only get better from here.

Those four are racing each other for the prospect of more competitive bikes next year, so the remaining 11 rounds will be an ongoing job interview process. That’s all there is to compete for, the championship has already been won.