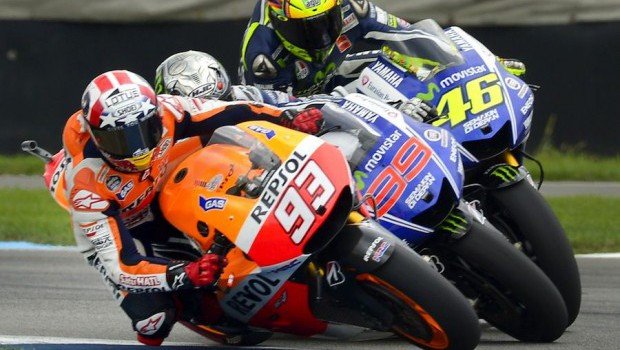 If you thought the 2015 MotoGP season couldn’t get any better after Sepang, you’d be wrong.

In the wake of the stoush between Rossi and Marquez the motorcycle world seems to have exploded and shows no sign of settling.

No matter what happens at Valencia, the shockwaves will keep on keeping on.

This is, without a doubt, the spectacle of spectacles.

In the space of three weeks, the bullshit media grins and manufactured personas of Rossi, Lorenzo and Marquez have been torn off, and they’re at each other like feral beasts.

And it’s only when these masks come off, do we see what we really want to see. The racers and their passions and animosities exposed.

For we are all voyeurs in this, the greatest drama of life and death.

Motorcycle racing is not nice.

That it has the sportsmanship it does is testament to how hard these blokes try to not beat each others’ brains out before, after and during the race.

It’s hard to think clearly when the red mist takes you. But they manage. It costs them, but they manage, mostly, not to kill each other.

I have no need to recap the incident.

It was succinctly dealt with by David Emmett, and you can read it HERE.

But the hysteria continues.

Social media is seething with either hatred for Rossi or hatred for Marquez, with some goodly doses of contempt for Lorenzo.

I have been watching MotoGP for decades. Even before Rossi commenced his rise to greatness.

And there have been dramas like this before, and there will be dramas like this again. It is a sport that needs and feeds off this kind of thing, and to be perfectly honest, is one of the reasons why I watch it.

The rumour mill is churning like a jet-powered shit-pipe. Yamaha is threatening to part company with Lorenzo, Repsol is whinging about there being no point in sponsoring a sport with no sportsmanship, and there are videos of chaos and poison from the pits in the aftermath of Sepang, both from crazy Rossi fans and not-so-crazy Dainese bosses. Petitions are being signed. More are being created. Race dads have gotten involved. Agostini got involved. Other racers, both local and international have been having their say on Twitter. There’s even talk of the riders parting on the grid to let Rossi ride through them to fight with Lorenzo. Rossi himself is adding fuel to the fire by speculating whether to race or not race at Valencia. There’s even a homemade video of some swearing Spaniard smashing his toy Rossi bike with a hammer.

There has been no precedent for this ever in the history of the sport. Yes, thank the Internet. But every shaved ape on earth can now climb onto a soapbox and scream his outrage at the outrageousness of anything and everything.

And I’m good with that. It only adds to the spectacle.

Because that is what this is.

And that is what I want.

I want those toys being chucked out of those 350km/h prams. I want those expensive handbags impacting across pouty faces.

I want the racing to be ruthless and vicious and savage.

I want them to fight like demons in a hole. On the track and off the track.

I have never cheered louder than when Rossi went the biff on Biaggi in Parc Firme and left him with a welt on his Roman nose.

Actually, I lie. I cheered louder when he ran Marquez wide and Marquez ate gravel after running into him. Then I cheered louder still when Lorenzo stormed off the podium cloaked in boos. I stopped cheering when Pedrosa delivered a measured and very professional comment during the post-race press conference, and developed a new level of respect for the bloke.

Then I started cheering again when the media storm began.

And let’s not pretend like it’s not at all confected.

The Pom announcers had decided that Rossi “kicked” Marquez off his bike the second it happened. They were wrong, but they made that call as they saw it at the time, and it was just the beginning of the howling and baying.

Ultimately, it’s all very fabulous and I love it.

I don’t know what will happen in Valencia.

I just know that it will be poisonous and glorious and spectacular.

It is Spain and Spain and Italy have basically declared war in their respective media over Sepang.

You actually need to be a wog to understand how virulent this is.

Australians, generally, are a passionless bunch. Yeah, we yell and scream, but we rarely take it to the next level on the edge of our sporting arenas.

Go to Europe. See what true passion is all about.

Guaranteed you’ll see shitloads of it when the circus goes to Spain for the round after the penultimate round.