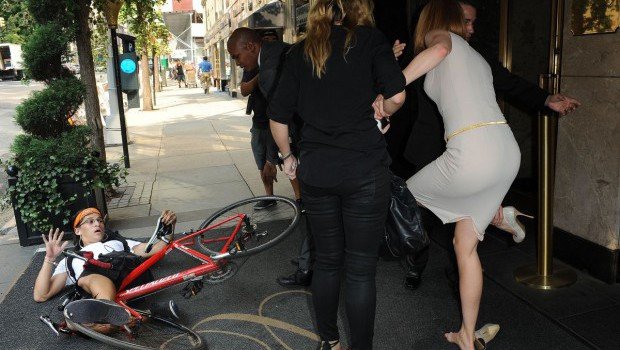 All bikes are not created equal.

This morning, as I strolled wistfully to my office, enjoying the morning sun warming my shoulders and my spirit, I was clipped by a bicyclist, passing me from behind on the footpath. Not a minute later, I had to step aside hastily to avoid being struck by another bicyclist coming towards me on a narrow part of the same footpath. It perplexed me, as I was walking along the footpath, and I understood that to be the domain of pedestrians. I know I can’t ride a motorbike on there, so why were bicycles everywhere?

So I did what I considered to be the safest thing: got off the footpath and walked to work in the cycle lane. Despite being right beside the pedestrian footpath, and it being the purpose-built, designated carriageway for bicyclists, the bicyclists obviously weren’t using it.

Except it turned out that other bicyclists were using it, and took offense at me walking within it. Thence ensued a barrage of abuse and hollow threats of violence, most of which were drowned out by my iPod, followed by obvious attempts to intimidate, which were equally hollow. For when someone has spent as much time self-harming on motorcycles as I have, it is simply impossible to physically intimidate them by riding close in your lycra underwear and Goretex backpack. And some skinny bloke getting all sweary because you’ve interrupted his morning Tour de Farce doesn’t really make your blood chill.

Despite feeling unpopular, I was comfortable in the cycle lane, because the bicyclists at least noticed me there, whereas I was obviously cloaked in invisibility on the pedestrian footpath. With this new-found comfort, I was able to look around at the scenery instead of watching for bikes trying to hit me. Then the extent of the problem became apparent. The pedalling scourge was everywhere. In the two blocks I walked along College Street, there were bicycles heading both directions, on the footpath on both sides of the street. This is a street with a purpose-bike cycle lane, including pretty little bicycle shaped traffic lights.

They were on the internal footpaths of Hyde Park, riding in both directions, including one dreadlocked fucktard who vaulted down the steps at the end of the park, onto the footpath as though in his own downhill mountain bike adventure. Pedestrians had to make way for his landing on the footpath. Most of them were startled by the act. The sense of entitlement among bicyclists is such that some of them are entirely comfortable behaving in such a manner.

There were bicycles on the road as well, among the traffic. They were mostly travelling the right direction, though plenty were keen to use the pedestrian crossing to cross the road and mount the footpath, or mount the footpath to avoid traffic and red lights to turn the corner.

Then there was the flagrant disregard for the rules of the very roadway they wish to share, for bicyclists don’t let the inconvenience of a red light, a no entry sign, a stop sign or a one way street sign impede their progress. Bicyclists without helmets outweighed those with, despite that being one of the few laws that governs their presence on the roadway.

And within their presence on the roadway is a whole new aspect of their lawlessness, particularly Transit Lanes and Bus Lanes. Those who register their vehicles and maintain licences to operate same are strictly forbidden from using those, yet for some unfathomable reason, the bicycle brigade is permitted to use those lanes, which were apparently set up to improve traffic flow. A state government who spent god-knows-how-much to restructure the roadway and set up bus lanes to allow more efficient passage of mass transit public transport, now sees their mass transit vehicles restricted to the speed of the bike occupying the lane ahead of them. Fifty people on their way to work in the morning, all impeded by one sociopath with shaved legs. And yet, we wonder why the public transport system is failing…

So, you ask, what elite societal group is this, that has carte blanche to ride wherever they please, ignorant of the laws that apply to others? This privilege is extended only to one subset of commuter, so are these are these citizens who’ve performed some great public service, to which we are indebted and offer this simple reward? Are they of royal blood? We are after all, a humble colony of the monarchy.

Are their jobs of such importance that they are exempt from the rules that apply to others, and all others must yield to allow their speedy arrival? In the Soviet Union, the senior members of the Politburo were granted their own special transit lane, to spare them the hassles and delay of the common man. But that was a single lane. Bicyclists get whichever lanes they please, plus their own designated lanes, and the footpath. Motorcyclists, who are subject to mandatory training and licencing, do not enjoy these privileges. What makes the bicyclist so special?

“Nothing at all” is the answer. This is available to anyone who exercises the option to cycle, and who is within a distance conducive to cycling. And therein lies the crux of the problem. There is no uniformity among these pedalling pests. No mandatory education, no testing, no licencing. Combined with a complete lack of policing, it is no mystery how the city cycling scourge has developed. While ever they are pandered to by the likes of Clover Moore, their smugness and sense of entitlement will only continue to increase. They are not subject to registration or licencing fees, nor the exorbitant fuel levy other motorists pay to contribute to the construction and maintenance of the very roads they seek to inhabit, yet they expect special privilege upon those roads.

This is a particularly relevant point, for it comes at a time when I’m budgeting to register and insure my bike again. The privilege of using my BMW GS on the nation’s roads will set me back in excess of $1000 again this year, in addition to having to pay to hold a licence to ride it. Every time I pull up at a petrol bowser, I won’t just be buying fuel, I’ll be contributing a fee towards the maintenance of the road network.

As a motorist, I am also obliged to maintain a knowledge of current traffic legislation, for traffic offences are strict-liability offences that place the burden of knowledge with the licence holder.

Despite being a large bike, the GS doesn’t occupy much more of the roadway than a bicycle. It is just as capable of mounting the footpath and riding across the pedestrian crossing as pushbikes. So what’s with the double standard? If it’s not a problem for bikes to ignore traffic signals and ride on the footpath, why can’t all bikes do it? The only bikes excluded from this are the one that are registered to be there.

What is so empowering about lycra that once strapped on, the wearer develops the sense of superiority that exempts them from laws that bind others, and gives them their unquestionable right of passage? The simple reality is that rules that apply to them have never been adequately enforced. So why WOULD they comply?

Traffic police have a heavy presence in Sydney CBD, for the sole purpose of ensuring free flow of traffic, through high visibility and enforcement of the road rules. Yet they pay no attention to bicyclists on the footpath, without helmets, or any other breach of law.

Those who seek the protection of the law, must adhere to the law. How can a person flagrantly breach all manner of traffic and local government legislation, then cry foul when a car cuts them off? The answer is that they cannot. But the system allows them to get away with that, because these deviants are not adequately policed.

Traffic police actively target motorcyclists. That’s not a myth, they proudly admit it, telling us that they’re promoting our safety in doing so. Because clearly motorcyclists are a danger to themselves, and bicyclists are responsible citizens who don’t require such attention. I can guarantee that if I rode my bike to work through a red light or without a helmet, it would be a very expensive morning for me. It would also be something that if repeated a few times would result in my privilege of road use being suspended before the end of the week. Such consequence does not apply to the lycra brigade. So why would they obey the rules?

The solution is simple. Dramatically increase the monetary penalty for bicycle-related offences, then enforce the legislation that already exists. Punish recidivists by banning them from the road as you do with other road users. Traffic law enforcement is largely revenue targeted, so it stands to reason that increasing the financial sanction would provide a two-fold benefit, in that it would attract the attention of the enforcers, as well as motivate the bicyclists themselves to respect that particular aspect of law. It would also certainly address safety of bicyclists, and reduce their involvement in traffic accidents, if that is the type of thing that concerns you.

I have nothing against bicyclist per se, regardless of how ridiculous they look in their shortened Spandex jumpsuits. Just get the fuck off the footpath, it’s for pedestrians. Unless your name is Stephen Hawking, your wheels have no place on the footpath.

If you want to use the road, no problem. But play by the fucking rules. You’re the first ones to complain when a motorist’s actions impact on you, so be respectful of other road users, and abandon this mentality that you own the road. In the grand scheme of road users, you are the very bottom of the food chain. You are neither registered nor licenced to be there, so play by the rules. If you can’t do that, don’t complain when you end up under a taxi. There will be no sympathy from the paying road users if you do. Especially if the time it takes the ambos to pull your mangled bike and limbs out of the taxi’s wheel arches makes us late for work.