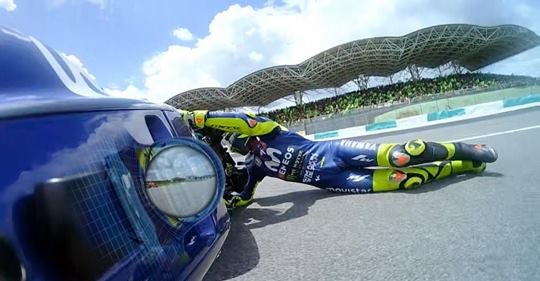 ” It must take your step-mother, Fat Uccio, hours to mop it all out of there. Does he cry when he’s doing it? Maybe he and the Sad-Eyed Puta could share a weeping bucket.”

I would have written earlier, but I was in too much pain from laughing so hard. All my intestinos had knotted themselves in pleasure. I could not make the kaka for three days!

I laughed so hard the broken bone in my arm became stronger and stiffer, like the mating-tusks of a winged shark. I have blown up this picture and it hangs on my wall and I look it whenever I am not wearing any pants.

I would have won that race if I had wanted to race and you would have crashed behind me and I wouldn’t have seen it, which would have been disappointing.

But I didn’t race, because it was too hot in stupid Brown China and I knew that idiot Pirro would destroy my Ducati, and I wanted to see that because that is always funny too, like when the Criminal Redding steals Crutchlow’s race boots and sells them for beer.

But none of that is as funny as you making a crashing cucaracha out of yourself. SSSSSSSS-CHAH! It was so wonderful I would have hugged Gigi if he had not been busy putting paper towels on the floor to catch the defeated tears of my worthless team-mate when he failed yet again to even sniff a podium.

Here you were, all out in front just like the good old days when you were a shinier and a less wrinkled yellow than you are today. I saw this and I knew straight away someone had put something in the pony-urine you drink each morning.

Have you noticed the sound of the Mamba Disenfrenado y Glorioso e Inmensamente Viril y Caliente is the same sound as when you are sliding down the track with your leathers all full of mierda which is being pushed around inside your ugly blue-and-yellow suit by the broken telemetries?

It must take your step-mother, Fat Uccio, hours to mop it all out of there. Does he cry when he’s doing it? Maybe he and the Sad-Eyed Puta could share a weeping bucket.

When I saw it happen my joy was that of a mighty king-eagle on a mountain with a small horse in its beak.

“YAYAYAYAYAYA!” I laughed and kicked Dovizioso’s spare helmet all the way into the palm trees up on the hill. I think there are five of the dented salty things up there after all this time. Dirty palm-rats live in them now and all of them have more spirit than he does.

I know someone sent you a nice message in my name after it happened, and when I find out who it is (I am looking at you, Davide), there will be another helmet kicked up into the palm tress for the rats to nest in.

I would not have sent you a nice message. I would have sent: “Put everybody’s sweaty cojones into your big monkey mouth and make the gagging noise!” or “How do you like the taste of Brown Chinese asphalt being force-fed into your culo?”

Anyway, I will see you in Valencia. Or maybe I will not see you at all from where I will be sitting on pole.