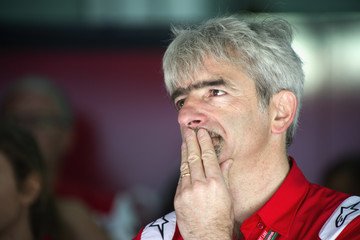 “I do not know how long my phone-light will last. And when it goes out, the wolves will come for us.”

You’ve been standing up on that podium all night. You need to come down. It’s kinda creepy you up there in the dark waving your arms around and yelling, and me down here using my smartphone like a torch.

Everyone has gone home. The Automotorotonotodromo, or whatever it is these unreconstructed Chechyan communists call the place, is closed. Even the gypsies who steal peoples’ wallets have left.

There’s just you and me, and some of our mechanics who are too drunk to drive and are sleeping on the tyre piles out the back of the garage.

I’m running out of phone battery, George. I do not know how long my phone-light will last. And when it goes out, the wolves will come for us.

That may be just as well.

I don’t even want to look at my emails and phone messages. They’re all from Germany. And I know what they’re about.

And no, they’re not about you getting a pay-rise because you won yesterday. I told you before, there is no Special Spartan Rule S32.08.1in Dorna’s regulations. Carmelo punched me in the last kidney I have left when I brought him your big thick folder with all the Special Spartan Rules you had written, and told me to get out of his bedroom.

So no, you don’t get to decide when the race ends. I know the Moto2 race was shortened to six laps, but that was Race Direction’s call, not Passini’s.

I know you’re struggling with this, but the rider in the lead does not get to decide how many laps a race has. So as much as you like to think you won the Three-Lap Wet-Butter Sprint according to Special Spartan Rule S32.08.1, there were 19 more laps after those three which you didn’t win.

And they were dry, George. All 19 of them. They were not, as you keep yelling, “Parade Laps of Victory”. They were actually race laps.

And they were as dry as the ink on your Ducati contract, which is now, apparently in the hands of damp-handed German lawyers in Berlin, who are under instructions by Matthias to “Get us the bastard fuck out of this shit”.

So come down. I will spray you with chain-lube, if you like. It’s just like that Freixenet garbage. You won’t know the difference, I promise. Mario can even put on a Monster Girl outfit if you like and kiss you on the cheek. He likes to wear them anyway.

Look, just follow my light and try not to fall down the stairs. I’ll be down here on the track keeping an eye out for the wolves.