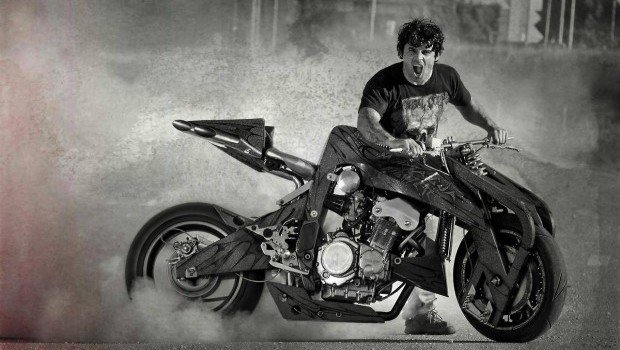 Just recently, the fool pool that is the benighted MRAVic, got all angered up cos a cop called motorcyclists hoons.

The cop was Victoria’s Deputy Commissioner Ken Lay, who distinguished himself last year by hooning through Tooboorac, getting nailed for doing 80 in a 70 zone, keeping this secret from his boss for two months, then whining in the media how his credibility was in the toilet. Apparently, his decision not to tell his boss how he endangered the life of every Tooboorac villager was based on the belief it might have undermined Operation Raid – one of those worthless “special” operations cops stage to make us all feel good about how they’re protecting us from ourselves.

So that’s Ken Lay, the cop who is 2IC of a police force, that according to figures obtained by The Age under FOI laws, happily issues cheery “official warnings” to 327 of the 555 cops that got pinged for speeding in 2008-2009. Nice, huh?

So I wonder why the cabbage-farm of cardigans at MRAVic even bothered to react to Ken’s petulant spray on the irrelevant 3AW. To wit: “Every day I am passed by hooning motorcyclists who put themselves in grave danger and I am simply fed up with it.”

The MRAVic, agog that the love it’s lavished upon the Victorian Police was not being reciprocated, immediately marshalled its legions for a ride-to-rule protest to show Ken we weren’t all hoons.

Of course, no MRAVic event is complete without a good dose of ego. And this was dutifully provided by its new non-bike-riding president, Kerry Walton, the day before the protest. You can hear Kerry’s humiliation here: http://www.3aw.com.au/blogs/3aw-generic-blog/riders-to-hold-lay-accountable/20100706-zxxq.html?page=1

It is shameful and embarrassing. But so is the MRAVic, which managed to clamber still further into its pit of disgrace on protest day. A pathetic 100-odd folks turned up, half cloaked in fluoro safety vests, only to be told by John ‘1.2km’ Karmouche that after the ride-to-rule protest they could all “start going back to your old habits” – in front of a TV camera, no less. Good work, fool. How much are the cops paying you to do this to us?

Here, watch the stupid farce for yourselves: http://www.youtube.com/watch?v=7aohy2IteOU&feature=player_embedded

When you stop weeping in shame, I would like you to consider the fearsome truth. Who knows or cares what Ken interprets as hoon behaviour? In all likelihood it is nothing more than blokes riding to stay alive. Ken just needs to remember he’s not being paid to moralise or engage in social engineering via his mates in the media. He’s paid to make sure his minions enforce the law, and that, quite rightly, doesn’t include him voicing opinions.

My opinions, on the other hand, are paid for. And mine, in this case, are best expressed by my good friend Mark (I have withheld his surname), who wrote the following truth on the BIKE ME! website. Such truth burns with a brightness all its own. Hell, I wish I’d written it…

“I am a hoon. I have been riding motorcycles on the road since 1970. I was taught to ride by hoons, and my riding mates have always, to a man, been hoons. I rode with learner’s permits for two years because you couldn’t lose it for speeding. I was booked for speeding many times in those two years. I rode drunk many, many times. I tried a P-plate once, and lost it due to speeding. I then rode to South Australia without a licence, where I rode for a few years still without a licence. I was never caught in South Australia.

“I have always travelled at least 10-20km/h over the limit. When I feel I can get away with it, I travel much, much faster, and that is often. I generally ride aggressively. I get booked for speeding far less than I used to, because experience has taught me how not to get caught. I try very hard to keep my skills at a premium, because that allows me to enjoy my motorcycling to the fullest, which almost always means breaking the law in some way. I do not think I have ever been for a ride without breaking the law at least once.

“I will ride fast in a T-shirt and shorts if I want to. I will ride without a helmet when I find a place where I can.

“I intend to keep riding this way no matter what the law is, what changes are wrought, or what the media or anyone else thinks.

“I will get caught from time to time. I may crash.

“I have been doing this for 47 years now and whatever it is, skill, luck, or guile, it has allowed me to be a hoon and get away with it.

“I wish those who take it upon themselves to improve the lot of motorcyclists well. I have no idea who they profess to represent, because I don’t know any law-abiding motorcyclists. I actually laugh at the thought of motorcyclists that aren’t hoons. I’ve been doing this too long to pretend I’m something I’m not – so I’ll keep on until we run out of gas, or get banned.”