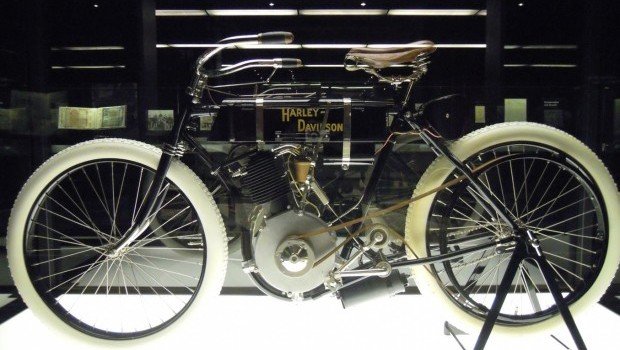 HISTORY OF HARLEY-DAVIDSON – PART ONE 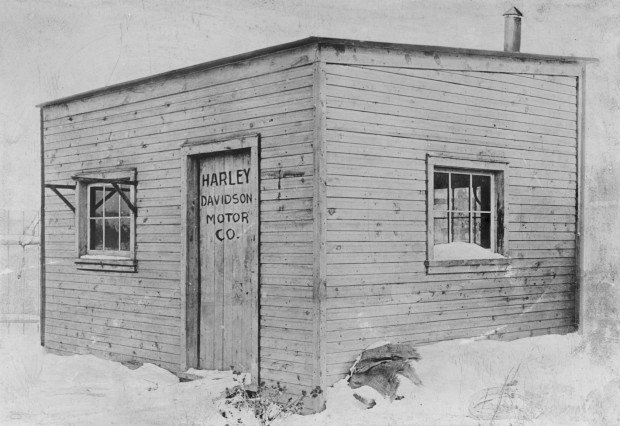 THE WORLD was very excited about itself in 1901. It was the dawn of the 20th century and there was quite a lot going on. A brave new country called Australia had been born, the Second Boer War was still in full swing, and Queen Victoria had passed away after 64 years of confused moralistic rule.

Over in the USA, in Wisconsin’s biggest city, two young blokes, were busily cementing their own place in history by conducting experiments aimed at “taking the work out of bicycling”.

Twenty-year-old Arthur Davidson and his mate, 21-year-old William Harley could not have imagined their fevered backyard tinkerings would one day resonate across the world.

In 1901, the only resonances inside the backyard shed were debates about how this new-fangled internal combustion engine could best be wedded to a pushbike to obviate the need for pesky and tiring pedaling.

William initially drew up plans for a tiny seven cubic-inch (116cc) engine, designed to be fitted to a pushbike. The next two years saw William and Arthur flitting between their shed and the machine shop of their mate, Henry Melk. Occasionally they’d emerge astride their experimental vehicle and attempt to conquer the streets of Milwaukee. They failed. The wee motor was simply not powerful enough to push their contraption up the slightest hill without the rider pedaling furiously to assist it. 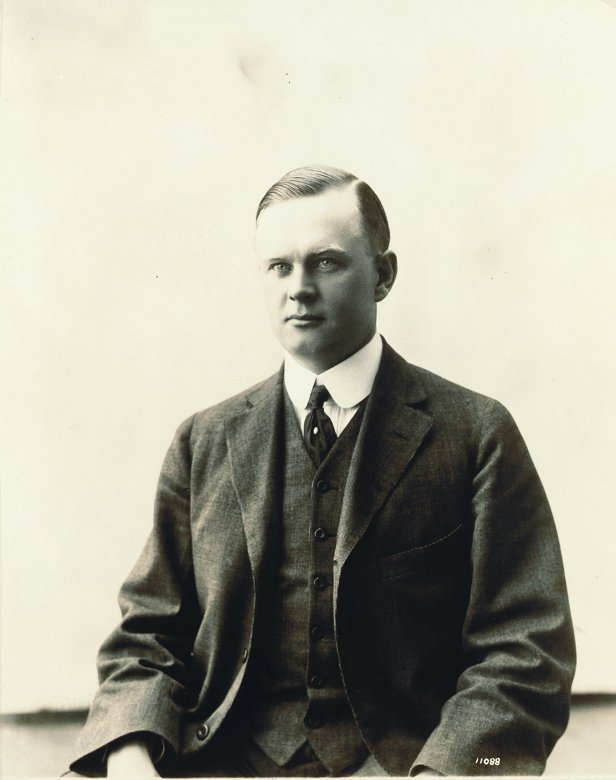 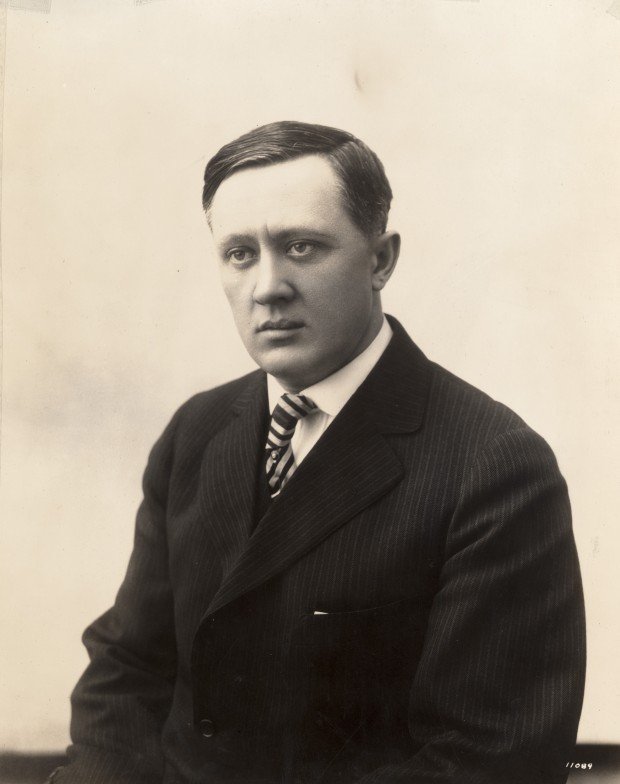 William Harley, before he got a neck tattoo and grew his hair out

William and Arthur persevered, and the first “real” Harley-Davidson motor was born in 1903 (the year the factory cites as its birthday). It was a 25 cubic-inch (405cc) unit boasting hefty 12kg flywheels, and it was married to a revolutionary loop-frame that was similar to what rival Milwaukee motorcycle builder Merkel was producing at the time.

Arthur’s big brother William and a Norwegian immigrant, Ole Evinrude (the father of the outboard motor), assisted the young blokes in their efforts, and by January 1905, the first engines were being offered to do-it-yourselfers in Milwaukee.

By April, complete bikes were on sale, but the shed only managed to produce 12 motorcycles that year.

Undeterred by this humble output, the following year the Harleys and the Davidsons built their first factory on Chestnut Avenue (later renamed Juneau Avenue and where the corporate headquarters are to this day) – a modest, single-storey wooden structure that employed about 20 people and managed to churn out about 50 motorcycles in 1906; and allowed William Harley to finally graduate from university with a degree in mechanical engineering in 1907.

No doubt buoyed by William’s new academic credentials, the two families expanded their production facilities, added another floor to their factory, incorporated themselves as a company and managed to triple their production by the end of the year to 150 motorcycles.

1907 was the year Harley-Davidson also began to sell its product to various US police departments – a practice that continues to this day despite the valid criticisms of the end-users that there are much more efficient and effective motorcycles the police could use when they’re chasing bad guys.

But the bikes Harley-Davidson was producing in those early years were far removed from their later efforts – efforts that would establish the marque as a cultural and social phenomenon unequaled by any manufacturer before or since. You only have to consider how many people have the words Nokia, Hitachi or Mercedes-Benz tattooed on their bodies to understand how profoundly that tiny factory came to affect the world of motorcycling.

The motorcycles of 1905 and 1906 were all single-cylinder thumpers, but at the Chicago Automobile Show in 1907, Harley-Davidson displayed a prototype with a 45-degree V-twin engine. This motor displaced a whopping 54 cubic-inches (880cc), produced a mammoth seven bhp (twice the oomph of the early singles), and had a top speed of almost 100km/h. Oddly, bugger-all of these V-twins were produced by H-D in the three years between 1907 and 1910. It did advertise and show them off, but it just didn’t seem to make any of them for public purchase. Nonetheless, its production numbers continued to climb; in 1908 H-D made 450 bikes. In 1909 it churned out 1,149. 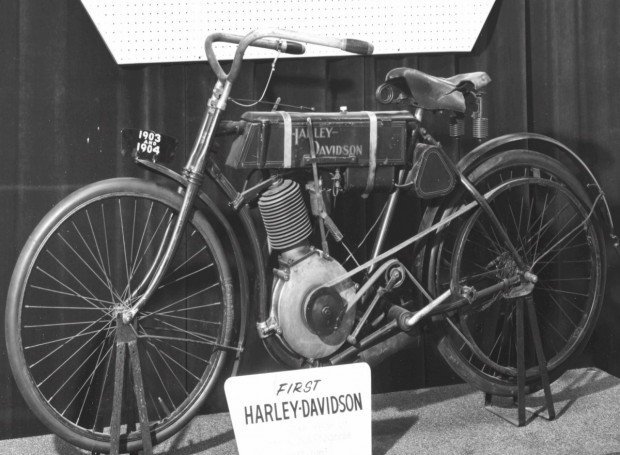 It needed apehangers and flames

At that time, there were more than 150 American motorcycle manufacturers, though only Harley-Davidson and its great rival Indian could properly be viewed as “successful”. And very few of these manufacturers would survive into the following decade.

It wasn’t until 1911, as the world seemed fated to be plunged into a major conflict, that serious mechanical efforts were made on the V-twin design. The crappy “automatic” intake valves that operated (now and again) courtesy of the engine’s vacuum, were shelved in favour of mechanically operated intake valves. It was also the year when H-D decided on a smaller-capacity engine (50 cubic-inches or 810cc) which offered better performance.

Two years later (1913), pretty much all of H-D’s bikes would be V-twins, and a new five-storey factory was constructed at the Juneau Avenue site. In 1914, a staggering 16,284 motorcycles rolled out its door. 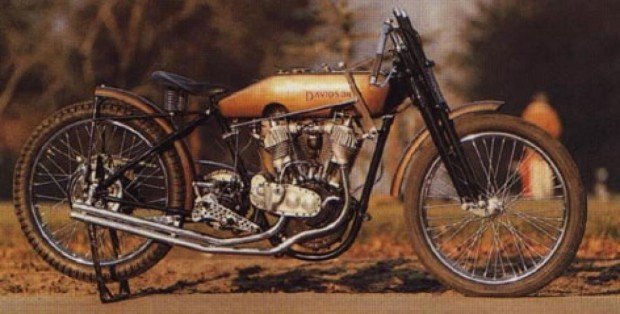 Harley-Davidsons were now being raced with great success, used in border skirmishes between the US army and the Mexican Pancho Villa, and when the United States finally went to war in 1917, Harley-Davidson was at the forefront of US military transportation, providing over 20,000 motorcycles for use against the Hun.

By 1920, H-D was the largest motorcycle manufacturer in the world. It had dealers in 67 countries and was banging out almost 30,000 machines a year. Times were good and in 1921, a Harley-Davidson became the first motorcycle to win a race at an average speed of 160km/h – on a wooden track in Fresno, California. 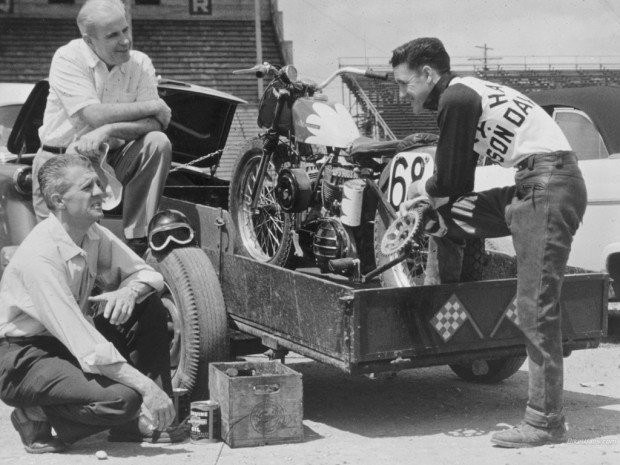 “The bitches are fizzing in the stands!”

The 20s also saw several technological improvements to the marque, like a bigger and more powerful engine (1200cc or 74 cubic-inches), the introduction of the teardrop-shaped tank (which is still with us today) and most importantly, the introduction of a front-brake in 1928.

In 1929, in response to the sales success of rivals Indian and Excelsior, H-D diversified and produced a 45 cubic-inch model that came to be known as the Flathead (due to the vertical cooling fins at the top of the motor) – thus creating a naming tradition that persists to this day.

But before it could cement itself as the icon it was to become, Harley-Davidson, like the rest of the industrialized world, had to make it through the Great Depression. 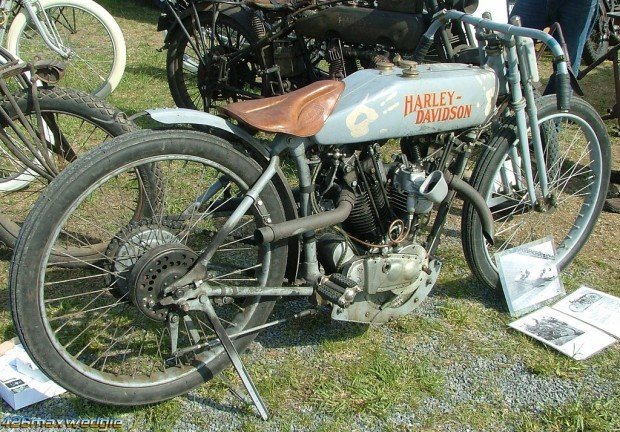 Straight the fuck up Pike’s Peak. With a chair.

Right from the start, Harley-Davidson set about re-writing the record books. In 1908, a Harley-Davidson achieved 188.234mpg in a reliability trial; in 1910 there were seven H-D winners in 10 national motorcycle races in the US; in 1916 a Harley-Davidson sidecar won the inaugural Pike’s Peak Hillclimb; and in 1922 Victorian crowds were thrilled to see a Harley win the annual Adelaide to Melbourne race and set a new record for the 580-mile distance of 18 hours and 54 minutes – without a single mechanical fault or adjustment. 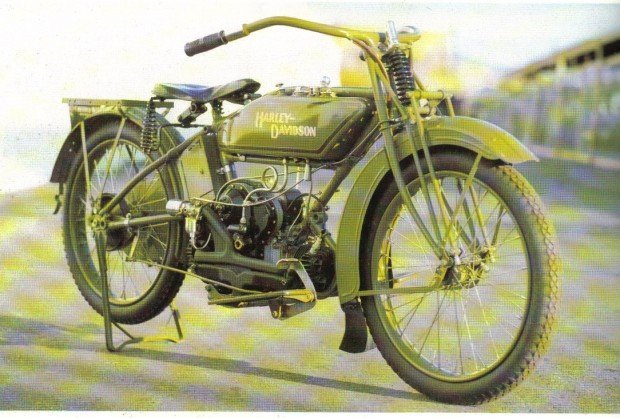 Why wouldn’t you ride it to Melbourne? No, that’s not a reason, poove.