Morning Whiskey forces a number of fierce and immutable truths upon a man. Certainly, the way the early sun lances through its bitter amber depths as you raise the glass to your mouth knowing it will wash away the sour hangover is a thing of great beauty. But the perfect verities it offers you are transcendental.

And as Curse and I sat outside a pub in Williamstown, Victoria, upon the occasion of Harley-Davidson’s 110th Anniversary watching the faithful rumble into town, these truths began to present themselves to us.

The first truth was that Curse was several sorts of beautiful psychopath. After handing me my VRod-riding arse from Yea to Whittelsea via the hard-baked remains of Flowerdale (which was not unexpected given he was riding a naked Honda Fireblade), he was then surprised to discover (as were a heap of Melbourne’s peak hour commuters) that a VRod is every bit as capable of splitting lanes at twice the posted limited as his puke-green missile was. All it takes is an iron commitment and the fear of being lost forever on the LA-like freeway tangle Melbourne serves up to interstate visitors. This is Curse and his Puke Green missile of speed and nastiness.

After a session like that, Morning Whiskey was the only possible way forward for both of us.
We were on our third when the second fierce truth presented itself.
“Harley-Davidson’s international marketing director must be viewed as the Risen Christ,” Curse grinned, as we watched another group of Harleys idle in to engage in an event tailor-made for them in every way. “This whole shebang is a marketer’s wet dream.”

I nodded, watching some of the tubbier pensioners struggle to park their UltraGlides without their fossilised knees exploding or incontinence pants overflowing.
“You do understand Harley would struggle to sell a single motorcycle if it wasn’t for the outlaws,” I said.

The third fierce and immutable truth was now in the room with us – and totally elephantine in its undeniability.
The entire Harley paradigm and on-going success as a marque is based completely on the fact that Harleys are cool. But they are only cool because outlaws ride them.

Certainly, the American position on this is tempered by the Yanks’ ferocious patriotism. They buy American because it is American. But Australians do not buy Harleys for that reason. We buy them because outlaw motorcycle clubs made them cool, and when we ride them, shotgun pipes barking and chrome glistening, we imagine a little of that ineffable outlaw cool is rubbing off on us.

Now I really don’t give a rat’s red arse what your views are about outlaw motorcycle clubs. And I can assure you the outlaws give even less of one. But you must acknowledge the debt that is owed to them by almost every Harley rider in this country. Every HOG member sporting a leather vest adorned with his manifold merit badges knows, deep in his facile wannabe waters, that he is parodying the vest of an outlaw motorcycle club member. Happily, outlaw regalia has evolved in the last two decades and it would take a serious mugwump to mistake a HOG member for a one percenter these days, but that was not always the case.

In the late 80s and early 90s, the casual observer could be forgiven for thinking that the pack of thundering Harleys passing him on the road, the riders adorned with various patches and grim-faced behind anti-social wrap-around shades, were part of the outlaw motorcycle scourge we’d been told was sweeping this land. The real outlaws were somewhat less forgiving about this, and there were instances of vests being forcibly removed from various people who had sewn things onto the back of their shiny new jerkins in a vain attempt to capture some of the cool that comes with a set of true colours. 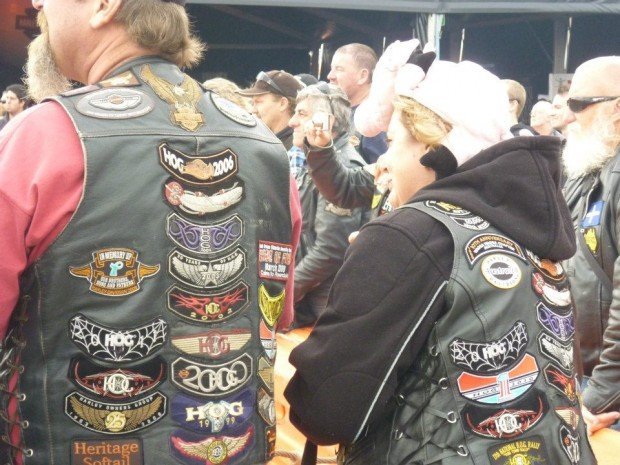 Merit badges. Lots of them

And while imitation is indeed the sincerest form of flattery, this does not apply to outlaw clubs – where imitation is an invitation to a host of unpleasant outcomes for the imitator.
Clearly, the world has moved on from the time when I literally knew most of the blokes riding Shovelheads around Sydney. Hell, there couldn’t have been more than 250 Harleys in the whole city. Fifty of them were off the road in boxes, fifty of them were ancient collectibles, about five were ridden by clowns who didn’t know any better, and the rest were roaring around under the balls of horrible patch-wearers and blokes who wanted to be horrible patch-wearers.

That such blokes were the very personification of cool was evident by the reaction of normal people whenever they made a grand entrance at some pub. Girls would touch-up their lipstick, moisten their panties and try not to stare, while blokes would either puff out their chests and adopt an infantile “Hail and well-met, please-don’t-kill-me-scary-bastard” attitude or just leave.

Then the Evolution motor appeared, and while the outlaw adopted it and adapted to the new reality, the commitment and dire lunacy mandated by Shovelhead ownership was no longer needed. Ordinary people could now dress up as pretend-outlaws and ride a roaring hog around the place. Harley sales went through the roof and marketing gurus waxed lyrical about freedom and bad-arsedness and…well, here we are today.

Is it a good place to be? Maybe. That is certainly a discussion for Late Night Whiskey.
But with the money the wannabes bring to the game Harley makes glorious and reliable motorcycles that are still, despite what you might encounter at a HOG rally, the very pinnacle of cool.
This is not a bad thing.

And just as long as we all remember the debt owed to the men who made Harleys cool in the first place, the place we’re in will remain kinda good.
But if we ever forget, it really will turn into a shit place to be. And I don’t wanna be there, no matter how much Morning Whiskey I can pour down my neck.