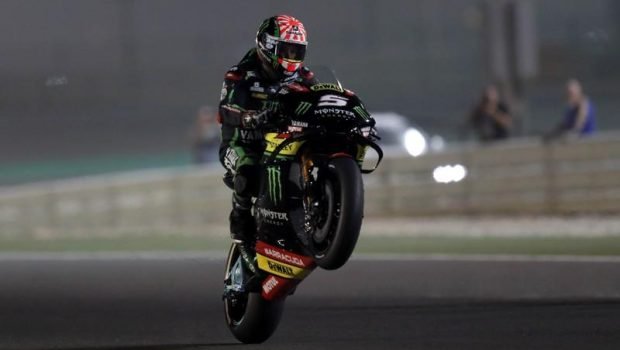 “He understands you’re upset, but he’s convinced Zarco is not “the stupid piss-reeking offspring of German arse-frogs”,”

Dorna has no provision for a trail-by-combat pole position.

I can ask, but I really don’t think Zarco is going to come out and fight you for pole position atop a sand dune “while the hot desert sun kisses the beast-sweat” from your bodies.

Hervé also want you to get away from his motorhome and take your urine-filled balloons, bags of soft merde, and paintbrushes with you.

He understands you’re upset, but he’s convinced Zarco is not “the stupid piss-reeking offspring of German arse-frogs”, and that the entire nation of France is certainly not “a stinking sewer of mincing beret-wearing pederasts, whose hairy women smell of damp cheese, Gauloises butts, and arrogance”.

He also feels it’s unfortunate you think the “Germans should have bulldozed the entire pâté-stained midden into the sea when they had the chance”, but he thinks it’s too late for your “invicible Spartan legion to burn Paris to the ground and put every pederast, whore and child to the spear”.

Look, I know you’re not happy with your lap-record being broken after 10 years. And it must burn to see it broken by the “treacherous horse-toothed freak-puta”, the “trout-eyed Italian sausage bag of sadness in the adjoining pit garage”, and that “sperm-gargling pancake from Cannes”.

It’s also most unpleasant to be gridded next to and just behind Vale…oops, “The Ancient 1000-Season Yellow Puta of All Putas”, and I’m not sure if I can stop him waving at you and signing his name on your visor, but I will ask Lin, OK?

Look, ninth on the grid is not so bad. Last year, the Viejo Bastardo Amarillo started from 10th and managed to get third. So you should be good for at least second.

Now come back to the garage before Hervé calls the Qatari security teams. You know what happened last time he did that. The stains are still in Parc Fermé.

Yours in eternal hope,