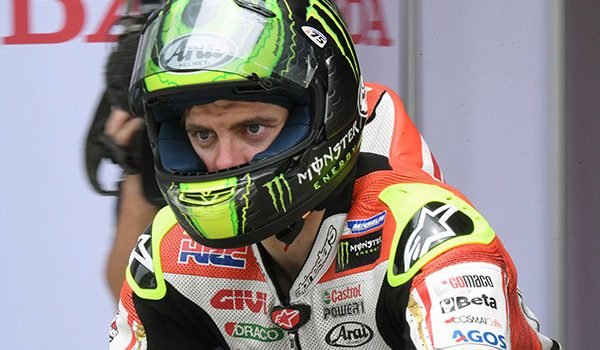 “Have you smelled Vinales lately? He pongs like a Manchester bog-slag getting her vodkas on in the laneway out the back of the club she’s just been tossed out of.”

You’re in my house now, you fat-cheeked knob-tosser. My house. Well, not my house where I live because Lucy’s not having any of that shite after Jack came over last time, drank all our piss, took off his pants and offered to show the lady next door how frill-necked lizards make babies in the dirt.

But Silverstone is every bit my house, even though it’s a racetrack and not a house with walls and a roof, and don’t you forget it, ya suntan-oil smelling Mallorcan tossbag. I’m going to beat you like a red-headed Black Irish stepchild. I’m not the Cal of old. I’m the new Cal. Cal the Contender, you pock-headed mank-muppet.

I can see in two directions at once. This gives me advantages you cannot understand, ya forward-seeing bell-end. I see everything all the time. So while you’re staring at your dashboard to see what that Map that spindly wog-insect wants you to ride in, I’m seeing the wankers behind me, the wankers in front of me, and that clown Bautista’s bitch-gold leathers kicking up gravel after he failed to pass me.

He can piss right off to ASBK, too. We have more than enough bloody girl-smelling uphill gardeners mincing around the bloody pits as it is. Have you smelled Vinales lately? He pongs like a Manchester bog-slag getting her vodkas on in the laneway out the back of the club she’s just been tossed out of.

I know Rossi makes him dance in some moll’s sex-keks whenever he finishes behind him, but Mav’s taking this perfume shite a bit far. You spick-lads are wrong like that.

So you just bring it. I’ll peel you like the mango you say you are. Fucken Black Mango, aye? Why would you want to call yourself a Black Mango, you bum-fluffed minge-bag? Mangos aren’t black, ya colour-blind knob-end. What kind of slow-shuffling shit-gibbon thinks mangos are balck?

I keep hoping that stupid towel you wear around your neck will get caught in the chain, but knowing Ducatis, it’s probably stronger than the chain. And what’s with that towel, you massive strutting shitlord? You wear it like it’s some kind of upper-class wank-cravat. You some kind of baron? Ya ponce around sticking your black arse-flag into gravel traps like you’re conquering Africa, ya gleaming great wazzok.

Well, you’re not conquering Silverstone, Billy-no-mates. Piss on that. No muck-spouting, lubberwort toss-goblin’s gonna beat me at my home track. Not again, anyway.

I’m winning this one, ya nine-fingered stampcrab. See if I don’t.