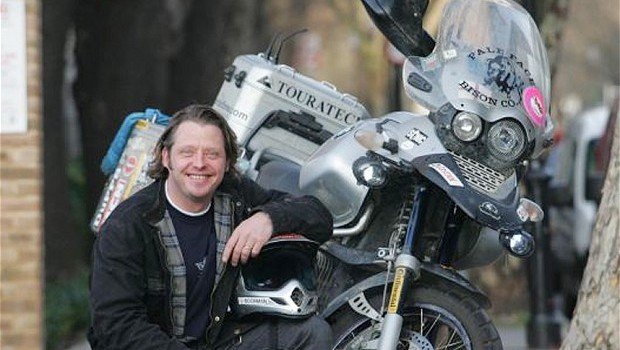 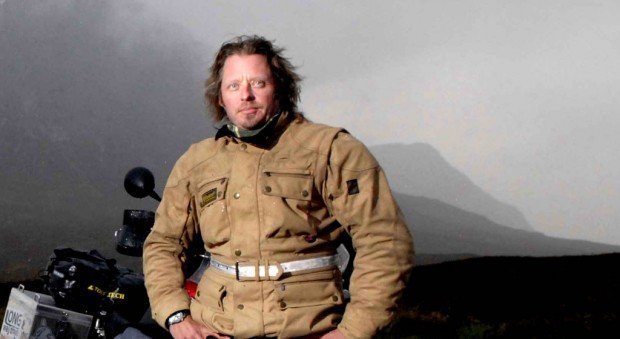 Guess who’s back in town? That’s right; it involves a camera and a motorbike to pose in front of, so it can only be one person. Just when you thought he’d succumbed to irrelevance, Charley Boredom is back in Australia, and being passed off as an attraction at a motorcycle show. The man who’s got more mileage out of another man’s coat-tails than anyone in history is back, selling himself as the great white motorcycle adventurer, to pose for photos with the kiddies, and flog whatever garbage he’s promoting this time. But try as he might to cultivate the image, he’s just not convincing.

The bloke doesn’t understand the concept of real adventure, and you can’t keep selling the notion of a motorbike trip with a factory technician and support crew as adventure. But it’s not Boredom’s fault he didn’t develop as a real adventure rider. In a country the size of a postage stamp, with freeways that connect all parts of it, he was never going to understand the true concept of adventure as an Australian would. The essence of the adventure for him lies merely in the business-class flight to another country, and the media event at the end of the flight. It’s similar to the antics of England’s other private school adventurer, the one who drags a television crew through the jungle so he can drink his own piss and give himself enemas with undrinkable water.

This self-appointed motorcycle icon did not actually develop from the world of motorcycling. He was in fact a third- or fourth-rate actor who became mates with a second-rate one, Ewan McGregor. The saga that created ‘Charley Boredom the fearless motorcycle adventurer’ began with a single documentary/soap opera, ‘The Long Way Round’, featuring both Boredom and McGregor. The origin of the ‘Long Way Round’ is laughable. One morning Charley Boredom rolls over in bed and says, ‘Oh Ewan, wet’s go for a wide. Wet’s go for a weally, weally wong wide, and take a camewa cwew!” 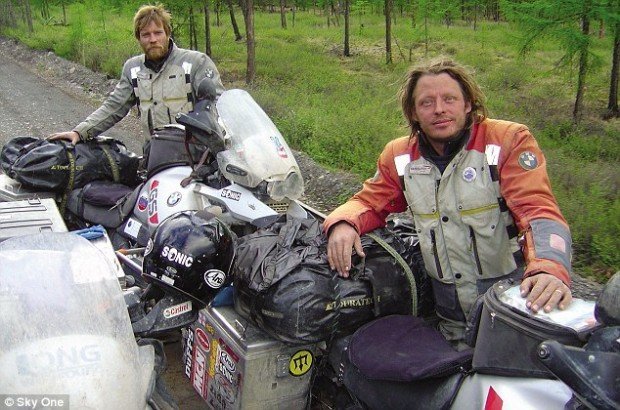 The boys are ready to roll

Ewan agwees… I mean agrees. The couple decide to use McGregor’s fame to fund a holiday, get some free motorbikes, and some quality time together in the wilderness. But here it becomes complicated, for as much as he loves the notion of motorcycles, and motorcycle ownership, Ewan cannot ride the fucking thing further than his local organic free-trade soy latte vendor. The idea therefore requires a level of planning that even NASA would consider overkill. A budget is secured, equal to the GDP of several Eastern European nations. London office space is hired to facilitate the planning. Clerical staff are employed. A Russian advisor, a paramedic, and various others are engaged to help the couple prepare. Out of the same budget a couple of brand new Toyota Landcruisers are purchased and customised to carry equipment and staff for the trip. A person capable of riding a motorbike and operating a television camera is located, apparently the only one in Europe. The whole thing is somehow marketed as a simple tale of two mates riding across the world for a lark. With official merchandise and marketing organised before a wheel is turned. 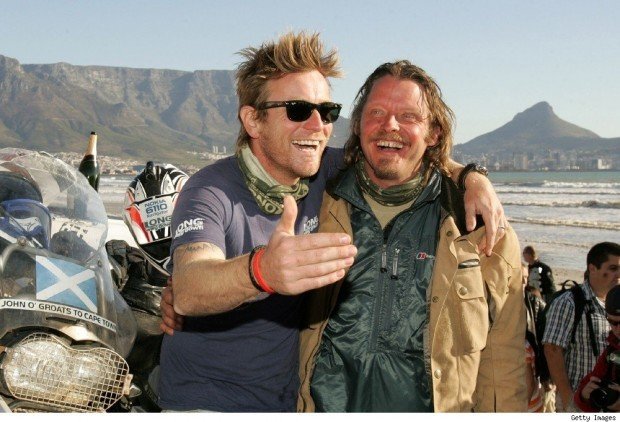 The happy couple in the midst of great adventure

Finally, Ewan goes to a couple of bike dealers and says, “Helloooo” in his charming Scottish brogue. “I’m Ewan Macgregor. I was in a movie once or twice. Can I have three motorcycles please?” For reasons beyond the comprehension of the regular motorcyclist who pays for their own bike, BMW acquiesces and give the bumbling fools bikes to play on.

Riding instructors were even supplied to assist the hapless couple, who spent a few weeks learning to ride motorcycles that were designed for real men. It was during this phase that the operation’s major weakness was highlighted: Ewan couldn’t actually keep a bike of that size upright – especially when it was over-loaded to buggery. To his utter amazement, it turned out that riding a motorcycle off-road is more difficult than sitting astride one for a photoshoot, and he spent much time stacking the bike and crying. Eventually one of those stacks resulted in him breaking a leg. And not just any leg, but one of his special Star Wars acting legs. The whole expedition was suddenly in great jeopardy, and lots of close-up footage of Ewan, Boredom, and the American documentary producer revealed just how serious the situation was.

Ultimately, the drama subsided. Thence ensued an ersatz adventure on motorcycles. In tow was their entourage of camera crew, and two fully-laden Landcruisers containing, among other things, a BMW technician and a doctor, to take care of any scrapes and bruises. 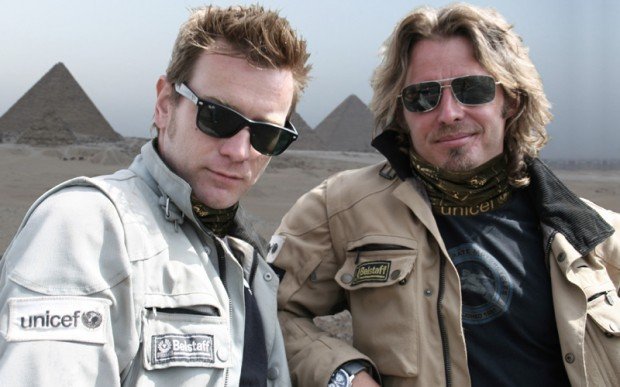 Bringing Blue Steel to the pyramids

The couple of weeks they spent falling off their bikes and crying in each other’s arms was fairly miserable television. The height of drama was the poor lads being delayed at the Czech border, where they realised the paperwork wasn’t properly completed to transport hundreds of thousands of dollars’ worth of audio-visual equipment across the border. Yeah, certainly high-stakes drama there.

Yet for some reason, the public watched it. Not hard to understand I guess; this is a public that tunes in to be fed a diet of altered-reality television, an endless procession of faux-dramas where middle-aged housewives pretend to be gourmet chefs, a dozen halfwits are locked in a house together, and enormously obese people cry about losing half an ounce. Mainstream television is pretty fucking dismal, so to that audience, the Dumb and Dumber motorcycle trip probably did seem like an adventure. Like pubescent schoolgirls, the pair kept a journal of their thoughts and emotions throughout, then passed it off as a book when it was over, and apparently people bought that too.

The happy, all-conquering couple did a couple more gigs using the same formula; a gigantic budget, state of the art equipment, an army of staff and media personnel. A public relations blitz, then it’s off for a couple of hours of riding each day, culminating in tearful displays of emotion on a Handycam in a tent. And a token stop-off at an orphanage or similar gives them the look of humanitarians, rather than self-indulgent media whores.

They tackle the challenge of adventure riding with amazing resilience: Missing the family? Just fly them in! Bike problems? Pull out the satellite phone, call the factory, and spare parts are flown in. It’s what adventure is all about, conquering adversity. 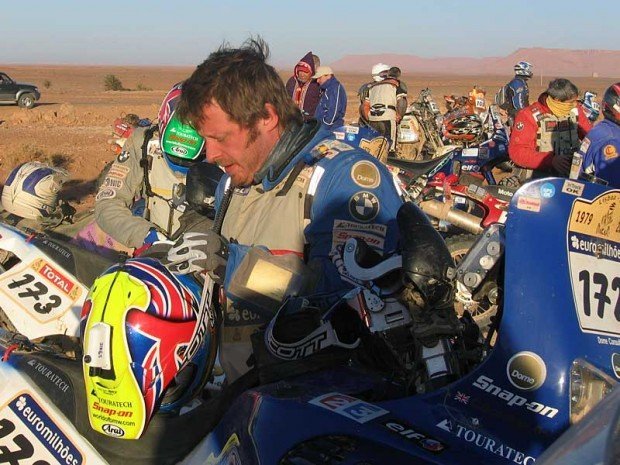 This is possibly after, or before, Charley’s Dakar bid came to an end. It’s hard to tell.

For what it’s worth, Ewan McGregor does real charity work in a meaningful way for UNICEF. The excess and feigned hardship of these trips detract from that.

The million dollar ‘adventure’ over, mainstream media, not the motorcycling public, adopts Charley Boredom as the self-appointed face of motorcycle adventure. It’s a sad representation of reality, because you don’t have to look far to see real adventure riders. If you’re off the beaten track in any part of Australia you’ll see people from all parts of the world traveling solo, in pairs or groups. Fully kitted out BMWs, or bare-bones DR650s. Some are just traveling the outback, some are traveling the world. All are doing it the way it is intended, with the hardship and spirit of exploration that comes with real adventure. Not like a pampered British Corgi with an entourage in tow and an advance team priming the local media for your arrival at every stop.

Charley Boredom is not a real motorcyclist in any sense. He is but a sub-standard actor doing a poor job of pretending to be a motorcyclist. He is the middle-class dregs of the dying English class system, trying to be the hero to the common man. Somewhere along the path of being a D-grade actor, he discovered motorcycling, which he probably imagined brought him an edginess. So he took motorcycling and smeared it with pretension and pomposity. There was a time when it looked as though he could be a breath of fresh air to long distance motorcycling, and show the public the joys of taking a motorbike to parts of the world most people don’t see. But that dissipated under the burden of Boredom’s vanity. Everything he touches reeks of wank, yet he continues to leech a living from a combination of his mate’s celebrity status, and BMW’s charity. 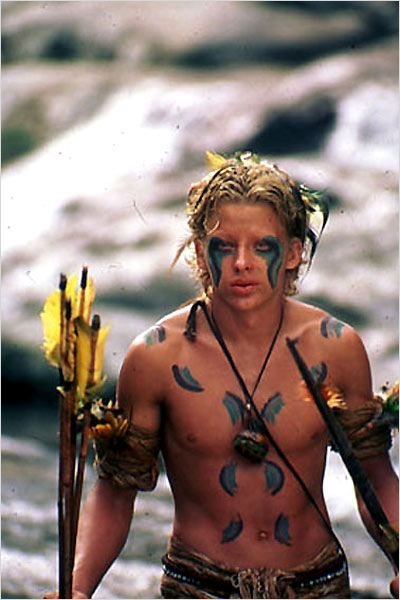 Charley in The Emerald Forest. Some say it’s his finest work.

Want to contribute to motorcycling, Charley? Use your ‘celebrity’ to promote real adventure riders. Instead of channeling money into your own self-indulgent bike expeditions, use the profile you’ve developed with the beige cardigan-wearing public to generate interest for young riders who want to compete in the Dakar, rather than just taking up space yourself to pose. Bring that media and corporate interest to similar races like the Finke Desert race in Australia to help them develop instead of grandstanding at the Dakar. You’ve had your fun, now move over and let the real men ride. If the lazy, unimaginative media wants to show the sheer awesomeness of motorcycle adventure, there are plenty of real-world examples out there. Please stop pointing cameras at this fool.

The world will be a better place when Charley Boredom ceases pretending to be a motorcyclist and goes back to acting in British soap operas. The bloke’s sole riding achievement is the world record distance he’s travelled on Ewan McGregor’s coattails. 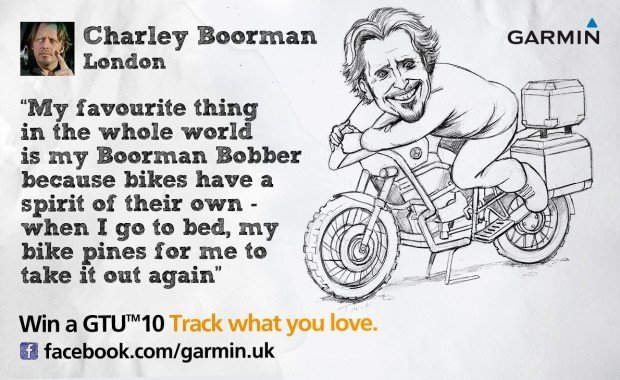 This is important to know.

Please, Boredom, you are not an adventurer. You are merely a luxury tourist with a camera crew trailing you. You are the original ‘Idiot Abroad’. If your portrayal of a hardcore adventurer is any reflection of your acting ability, it’s no surprise you failed at that and took to posing on BMWs for a living. Do the decent thing, leave the big adventure tourers to real men.

Farewell, Charley Boredom. Your journeys have taken you to the far reaches of irrelevance. May your next adventure be into oblivion.