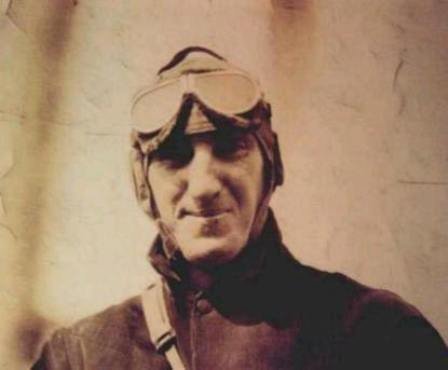 Erwin George Baker was born in 1882 in Indiana.

He got his first job when he was 12, and became a machinist in a foundry. He was a fit boy, who worked out in the gymnasium regularly and was particularly interested in boxing, wrestling and tumbling. He got a reputation for being quite an athlete.

He changed jobs, and joined an acrobatic drill team that toured the country vaudeville circuit. Like many others, he was interested in the new bicycling craze, and he rode one of the early motorized bicycles.

In 1908, Erwin purchased his first motorcycle — an Indian. He started entering (and winning) local races. In 1909, he competed in the first race ever held at the newly built Indianapolis Motor Speedway. He won.

Ever the showman, Erwin started some endurance runs on his motorcycle. He would create speed records in city to city dashes. He would race passenger trains from town to town. In 1910, not many roads between American cities were paved, and in his runs he would encounter deep sand, flooded river crossings, and mud.

This brought him to the attention of George Hendee, the co-founder and president of the Indian Motorcycle Company. In 1912, Hendee commissioned Erwin to take a two-speed, seven horsepower Indian on a demonstration tour of Cuba and Central America. Baker stayed closely associated with the Indian company from then on.

In 1913, Erwin rode an Indian from the West coast to the East coast of the United States, finishing in Savannah, Georgia. It was a big deal. Erwin worked for months writing letters pleading with individuals to help him map a contiguous course across the country. He had to organize gasoline to be shipped ahead to some places. At times the gas was taken in my mules.

To celebrate, when he got to Savannah, he entered a 300 mile road race on the same machine.

He did another trans-continental run in 1914, beating his record. Twice he had to shoot pursuing wild dogs with a handgun, once he pushed his out-of-gas Indian for miles in 119-degree heat, and he routinely wrestled with muddy roads that he described as “plowed fields.” It took him 11 days, 12 hours and 10 minutes to travel the 3,379 miles, most of them standing up — the Indian’s “suspension” consisted a semi-flexible frame designed to soak up shocks. A New York newspaper compared him to the Cannonball Express, a trans-continental railway train, and the name stuck. He became known as “Cannonball” Baker.

In 1915, Cannonball beat the “Three Flag” record — a ride from Vancouver, Canada to Tijuana, Mexico.

Cannonball accumulated his share of scars as well as trophies during his years of setting records. He also had a slew of interesting stories of things that happened to him during his record runs. In another three-flag record attempt in 1916, Cannonball had to change routes several times to avoid vast forest fires. In another run he came around a curve at a high rate of speed and came upon a herd of cattle in the road. In trying to miss the herd, Cannonball turned sharply, hit a hole in the road and was thrown off his motorcycle into a fence which in turn bounced him onto the back of one of the cows. The surprised cow bucked him off and he landed in a ditch at the side of the road.

Cannonball set numerous records in other countries as well, including Australia and New Zealand.

By the 1930s, Cannonball began shifting his focus and most of his record attempts were in cars. In 1922, he ran in the Indianapolis 500, but dropped out with mechanical problems. He became a test driver for car companies. On motorcycles, Cannonball began increasingly to participate in economy runs. In one such run, his Neracar motorcycle went 3,364 miles on 45 gallons of gas. He became an AMA race official and later was named national commissioner for NASCAR. After his record-setting days Cannonball also took up building miniature racing cars.

In the 1970s, a car magazine writer and racer called Brock Yates organized The Cannonball Baker Sea-To-Shining-Sea Memorial Trophy Dash, widely known simply as the Cannonball Baker or Cannonball Run. It was an unofficial, if not outlaw, automobile and motorcycle race run on public roads from New York City to Los Angeles. It ran four times.

The object of the Cannonball Baker was to leave the Red Ball Garage on East 31st Street in New York City, usually after midnight, and drive to the Portofino Restaurant in Redondo Beach, California in the shortest time possible. Those were the only rules. Nothing was specified as to the route, type of vehicle, or maximum speed permitted. Speeding citations received along the way were the driver’s responsibility and did not disqualify the vehicle (although having to stop to receive a ticket increased the vehicle’s overall time).

The Cannonball Run was technically a race in that the fastest time was declared the “winner” and the results were announced in order of time, but times were not taken very seriously. And it was found that sheer speed frequently did not guarantee a first place finish.

Cannonball died in Indianapolis on May 10, 1960. He goes down in history as one of the most famous motorcyclists of the early 20th century. His name was perhaps the most recognized of any motorcycle racer through the 1930s.