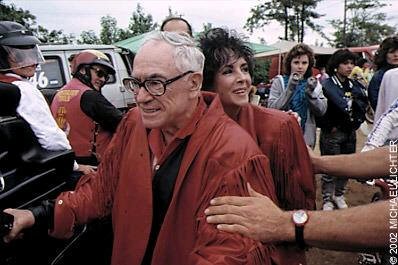 Malcolm grew up in New Jersey, and experienced good and bad times. During the depression things were tight, and his father often had to borrow money to pay his employees. But Malcolm finished school, and university. Just in time to go to Europe and fight Germans. (He received a Bronze Star and a Purple Heart in the Battle of Aachen in October 1944).

He went back home and joined the family publishing business. He went into politics, and won the Republican nomination for governor of New Jersey in 1957, but didn’t win the election. The same year, he became the editor and publisher of the family magazine.

It wasn’t going too well when he took over, but under his guidance and leadership it flourished. He became a multi-millionaire.

He became known for his extravagant parties and colourful hobbies, from hot-air ballooning to collecting Fabergé eggs.

In his late forties, he discovered motorcycles.

He bought a motorcycle dealership in New Jersey, and turned it into one of the largest dealerships in the country. He became a goodwill ambassador for the sport.

He defended the sport. The Garden State Parkway in New Jersey was open to cars, but not for motorcycles. Malcolm fought that, and won. He said: “I think legislative assaults on motorcyclists are totally emotional, disproportionate and totally unfair… They are instigated and implemented by people who know nothing about motorcycling, but have a prejudice. It’s easy to curb the freedoms of others when you see no immediate impact on your own.”

The Communist press of the Soviet Union and China both derided Forbes as a “Tool of the Capitalists”.

Forbes ran with it. He started promoting his magazine as a Capitalist Tool. 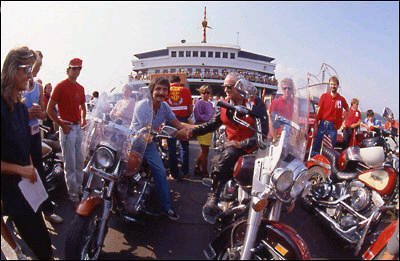 And he started a motorcycle club called the Capitalist Tools. His estate in New Jersey became a regular starting point for runs with New Jersey and New York motorcyclists. He eventually owned seventy motorcycles, mainly Harleys.

Later, he also bought two Amazonas from Brazil: Brazilian frame and running gear, 1600cc Volkswagen engine and transmission (with reverse), 363kg dry, brakes that taught the rider to plan well in advance. There were only 450 ever made.

In 1979, he used his connections to take the Capitalist Tools on a goodwill ride of the Soviet Union, which at that stage did not accept American tourists. 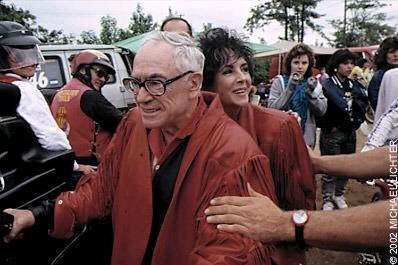 Malcolm with Elizabeth Taylor on pillion

In 1982, he used his political connections to ship a squadron of Harley Davidsons to China, which at that stage did not accept American tourists, and took the Capitalist Tools on another tour. He took a hot air balloon. The Chinese refused him permission to fly it. It “accidentally” slipped its tether, and finished its flight in a Red Army camp, almost provoking an international incident.

In February 1984, he took the Tools on a 20 day 3700 kilometre tour of Egypt. He took a hot air balloon shaped like the Sphinx, and flew it over the Valley of the Kings.

A sphinx-shaped balloon being piloted by Malcolm Forbes, the publisher, deflated and made a rough landing during a race here today, but there were no injuries.

Mr. Forbes, who suffered three broken ribs, a concussion and a collapsed lung in a motorcycle accident 10 days ago in Montana, said, ”there goes my ninth life” after his balloon thumped to the ground in this western New Jersey community, according to Dennis Fleck, the director of the Forbes magazine’s balloon division.

In 1985, Malcolm took the Tools to Thailand. Malcolm’s Harley was fitted with a calliope which played the Thai national anthem while he rode. The King and Queen of Thailand invited the Tools to dinner at their summer palace. And he flew another hot air balloon while he was there: this one in the shape of an elephant. A film crew filmed a documentary of it: “The Great Sky Elephant”. 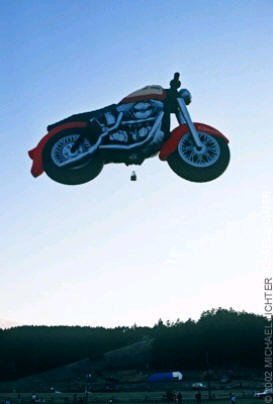 The same year, he published a book called “Around the World on Hot Air and Two Wheels”.

In 1989, Ronald Reagan presented him with the Presidential Citizen’s Medal.

William F Buckley, Jr wrote an obituary. “Malcolm Forbes was engaged throughout his lifetime in what I think of as acts of requital. He was the quintessential man who could not bear to keep to himself the good joke he had just heard. If Felix Mendelssohn could have conscripted the people of Europe to his ends, in 1830, he’d have used his power to bring them the music of Johann Sebastian Bach. So it was with Forbes. His principal contribution was in minting that blend of hedonism and hard work that justifies capitalism not only as a productive mechanism, but as a vehicle for wholesome pleasures.”

Forbes lives on in some of his quotations:

“I made my money the old fashioned way. I was very nice to a wealthy relative right before he died.”

“It is all one to me if a man comes from Sing Sing Prison or Harvard. We hire a man, not his history.”

“If you don’t know what to do with many of the papers piled on your desk, stick a dozen colleague’s initials on them and pass them along. When in doubt, route.”

“Never hire someone who knows less than you do about what he’s hired to do.”

“Failure is success if we learn from it.”

“Ability will never catch up with the demand for it.”