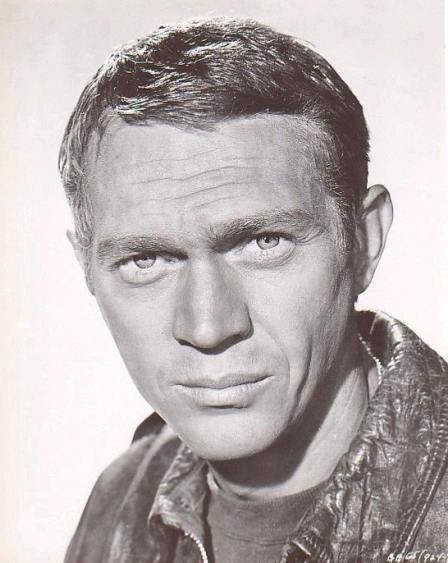 Steve McQueen was a troubled youth.

He never knew his father, who left his mother shortly after Steve’s birth.

Then his mother left him. An uncle looked after him until he was twelve, and then he was re-united with his mother, who moved with him from Indiana to California.

Two years later she sent him to Boys Republic, a home for uncontrollable children in Los Angeles. His time there was probably not all bad — he donated generously to the home later in his life.

He stayed there for three years, and left at 17 to join the United States Marine Corps. He spent a fair bit of time in the brig for being AWOL, but redeemed himself somewhat by helping to rescue five drowning seamen, and was transferred to the President’s Honor Guard and honourably discharged in 1950.

He drifted around the country doing menial jobs for a couple of years. During this time he bought himself a 1946 Indian Chief, and caught the motorcycling bug. “I was so proud of that Indian that I rode it over to see a girl I was dating,” he recalled in a later interview. “She said, ‘You don’t expect me to ride around with you on that, do you?’ I surely did. The girl went and the bike stayed.”

In 1952 he started studying acting under the GI Bill, which paid for ex-soldiers’ education. He did well, and in 1955 debuted on Broadway.

His career took off immediately, and within ten years he was one of the highest paid stars in Hollywood. Which was good, because it meant that he could afford more motorcycles.

Shortly afterwards, he took a group of his friends for a ride across Cuba. It was about the time of the Cuban revolution. “Batista and Castro were shooting it out across the countryside. There were uniforms everywhere, but we had a great adventure, which is one of the things that make motorcycling so great because it never fails to give you a feeling of freedom and adventure,” he said later.

One day in the early sixties, Steve was out riding around Hollywood with Dennis Hopper when they came across some dirt riders in the hills. McQueen was awestruck by their hill-climbing abilities. The next day he bought himself a 500cc Triumph off-roader.

He became a dedicated off-road racer. His movie studio contracts prohibited him from taking part in such risky behaviour, so he did it under the name of Harvey Mushman.

He competed on an amateur basis in the Baja 1000, the Mint 400, and the Elsinore Grand Prix, and often got very respectable places. Because of his movie commitments, he never raced enough to get his expert licence, but his natural talent and enthusiasm saw him usually ahead of the other amateurs and most of the experts.

Steve had become good friends with Bud Ekins, the man who sold him the first Triumph 500 dirt bike, and with Bud he dreamed up perhaps the most famous motorcycle jump ever filmed. He called Bud to join him in Germany in 1962 to be his stunt double on “The Great Escape”.

While they were there, they took a break to watch the International Six Days Trial in Germany.

Two years later, they went back to compete in it.

By this time, Steve had become so closely associated with motorcycling that Popular Science magazine commissioned him to do a series of motorcycle reviews.

In the early 1970s, a movie producer called Bob Brown approached Steve to finance a documentary on motorcycling. Steve could afford it. He put up the dough, and starred in it, not expecting to get a return. “On Any Sunday” turned out to be the best motorcycling movie of its time. And it made money.

At about the same time, Steve started collecting classic motorcycles. By 1980 his collection included over a hundred machines and was worth millions of dollars.

He died from lung cancer that year. He was fifty years old.

During his life, he owned about 210 motorcycles, 55 cars and 5 aircraft.

His contribution to motorcycling helped the sport overcome its outlaw image and helped set the stage for the popularity of the sport during the 1990s.