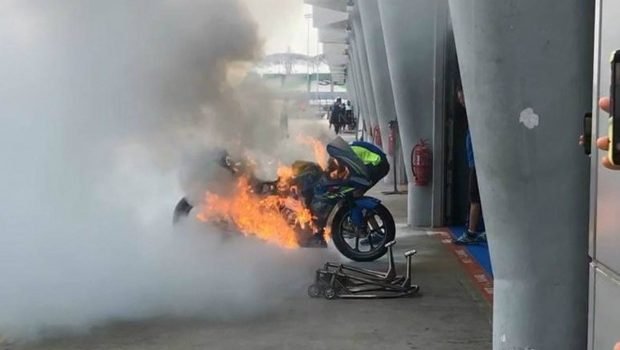 “El Spartano di Magnifico y Poderoso y Glorioso will ride the stupid Chinese circuit in Melanesia like an eagle who has the fins of a shark and the wings of an eagle!”

The Mamba has returned! SSSSSSS-CHAH!

El Spartano di Magnifico y Poderoso y Glorioso will ride the stupid Chinese circuit in Melanesia like an eagle who has the fins of a shark and the wings of an eagle!

Already one of the stupid Suzakaras has exploded in flame rather than face me on the track. I hope it was the Maniac Puta’s.

And no, Gigi. I did not start the fire. It was already burning when I arrived to laugh at it with racing fuel that had escaped from the Yellow Centipede’s garbage Yamaha and fell, entirely by chance, into my tin.

It was very funny. Not as funny as when the Escargot Puta tried to kill the Lesser Repsol last weekend, but pretty funny. Being thrown at other motorcycles is all those stupid slow Yamahas are good for. It is about time Lin Jarvis was clear about that. Or has he retired already?

So before I prepare to swoop and dash and swoop and dart and swoop under those stupid giant upside-down umbrellas, I have a few important questions you must answer, Gigi. So pay attention. You spend too much time holding buckets under the face of that sobbing idiot team-mate of mine as it is.

Has Race Direction torn apart the cheating Yamaha that cheated its way to a cheating win yet? Has that Blue Puta whose hashish-smoking parents named after the mincing Tom Cruiser in that stupid airport film been tested for drugs yet? Or can he not make the test-pee from terror?

Gigi, have you noticed how many Chinese are here in Malagolia? The monkeys still outnumber them, but there are a lot. Yes, I know it is their country, but still. Even Catholics do not have that many children.

How is the leg of the Mad-Eyed Puta? Has he been injected with the Yellow Centipede’s Leg-Juices? He must have grown seven new legs by now. And he will need them all when he returns in shame to crash again in a year or two.

So go immediately and find out these things for me. I really don’t care very much, but it will give you something to do before the race starts. You will be very busy after the race finishes, of course. Carrying me around on your shoulders and snorting like a war-horse is very time-consuming, as you know.

OK, then. That is all for now. Oh, and send me some towels.