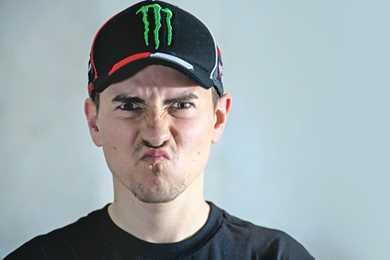 “Eat my fat balls, Gigi! You are not the boss of the Mamba! Only the Mamba understands what is the perfect tyre for every condition!”

I am drinking a glass that has been filled with the stale piss of Andalusian rats, the pus squeezed from a cankerous sore, and despair. Mainly despair. So much despair…

You’re like a wildebeest with three legs falling out of a tree and being set upon by baboons. Useless, worthless and overdue for a poor outcome.

Watching live horses being put through an industrial dog-food mincer is less traumatic than managing your expectations before each race.

It’s like trying to bribe a deranged circus animal with lollies instead of lashing it with whips and frying it with a cattle prod so it does what you want.

I don’t even care what that fuckwaddery at Dry Sack corner was about. Or what you think it was about. All I know is it was not as you say: “All the Dwarf Puta’s fault and may vultures eat his eyes and may his sweetmeats burn like battery acid!”

And it was not Dovi’s fault either. He was just trying to pass you because once again, you were riding slower than the racers behind you and using all the track. The only way to pass people who do that is to hit them in the face with a shovel. We are fitting one to Dovi’s bike now.

Each time I look at the replay – and I have looked at it at least 30 times because I have been sent 30 Emails from Germany asking: “Was passiert hier? Why ist Herr George crashing all of our motorcycles like a crazy bratwurst?” and attaching the video for me to watch over and over.

What did you say to me?

You said: “Eat my fat balls, Gigi! You are not the boss of the Mamba! Only the Mamba understands what is the perfect tyre for every condition! The Mamba knows and Gigi does not know, so Gigi must not speak to the Mamba about such things!”

And what happened? You went very fast and were in front for a few laps. For a few seconds it looked like my life as a leper’s rectum may have been redeemed.

But then of course it wasn’t. Your tyre went off and you started to hold people up. I know you like to think of the races as a parade with you in front, but the other racers don’t think that way.

It’s pointless sending everyone notes saying they are only allowed to pass you when your bike catches fire. Most of them can’t read anyway – they’re motorcycle racers. I think Rossi is the only one who went to school for more than 10 minutes.

The criminal Redding punches everyone who hands him a piece of paper. Poor bastard is waiting to get sacked and lashes out a lot in anger.

At least three of the others, Smith, Abrams and Simeon, are legally blind, and Crutchlow can only see the hallucinations he gets which tell him he’s world champion.

He even hallucinates in the gravel traps he spends most of his races in. It’s amazing.

That piece of paper I shoved under your motorhome door? Do not wipe your arse with it and throw it at Dovisoso, OK? It’s got the names of all the Suzuki executives and their mobile phone numbers. Call them. All of them. Tell them your name is Pierfrancesco Chili and you wish to return to MotoGP racing as Suzuki’s Number One rider. Tell them you’ll pay them. I’ll pass the hat around to cover those costs.

Don’t worry. The Suzuki people will believe anything. Ask Iannone. He told them he was Max Biaggi. They were over the moon.

The next race is in Moscow, George. Go there. Please.