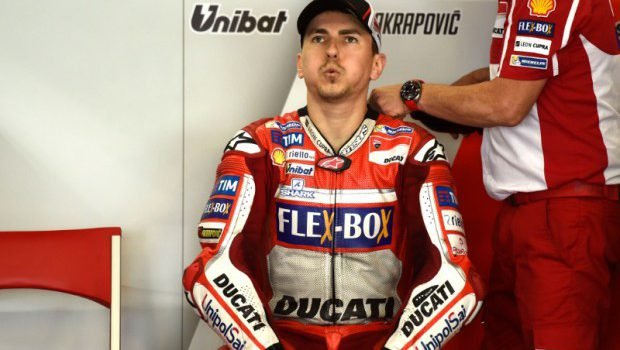 What the bastard fuck was that? You trying to give me a heart attack? When you sailed into the lead stuff stopped working in my chest.

Enzo and Carlo had punch me in the sternum until things went back to normal and you drifted back to race with that Michele woman and crazy Tits Rabat who still thinks he’s in Moto2.

You said: “I wasn’t fast enough”, in case anyone was wondering why you didn’t win, and then you tell everyone “I was very brave”, which may well be true, since you weren’t crying and swatting imaginary bats when you got back to the pits this time.

But do you have to say that? It creeps me out when you tell people how brave you are.

And then you say: “So I tried to do the same, but Rossi didn’t allow me. He overtook me, especially in the middle of the corners.”

George, it’s a race. He’s racing his motorcycle. Overtaking people is what he does. It’s what you used to do.

And how didn’t Rossi allow you to overtake? Oh wait, I know. By riding faster than you, right? What a bastard.

And then you start to reminisce. I hate it when you reminisce. “The Yamaha bike worked, especially here. Probably was more natural for my riding. With the Yamaha I was fast from the first three races in 2008. Here I finished on the podium for eight years.”

Yes, well, that’s over now by the looks of things. You need to move on. Build a bridge. Build it out of old telemetry if you have to, but build it.

And then you went on…

“So I’m working with Gigi and the engineers to make the bike turn better.”

George, standing over the mechanics in your red underpants and screaming “Make it win, putas!” is not “working with Gigi and the engineers”. That shit might have amused Jarvis, but it’s making Enzo self-harm when he’s alone.

Just remember, the bike does not turn by itself. You have to turn it. Seems to work for Dovi. And Petrucci. And Bautista, who is riding a 1996 Ducati 955, and pretty well, I might add.

“Believe me I’m trying everything. Change the position on every race, the hand levers, rear brake, the seat.”

They believe you, George. I’m sure they can work it out from the pile of levers, seats and brakes we shove into the garbage bin each round.

You wanted the thumb brake. We put it on. You started yelling something about the “Octopus Button” not operating smoothly. I told you we would get a new smoother octopus. You seemed happy.

Now you’re not happy. But you know who is happy?

Dovi. I have never seen him so happy. He has been hugging me and kissing me on the cheeks and thanking me for building him the best bike in the world. He said he wants me to be his “Papa”.

I guess it feels good to win on your home track, even though it was covered in Yellow Puta Fog as you called it. And no, I am not lodging a protest with Dorna about the Yellow Puta Fog. Dorna already thinks I’m crazy for installing some girl’s Japanese sex-octopus behind your seat.

Next week we’ll be in Spain. The hopes of an entire country are riding on your performance. Good thing Vinales is there to take up the slack if you’re not up to it.