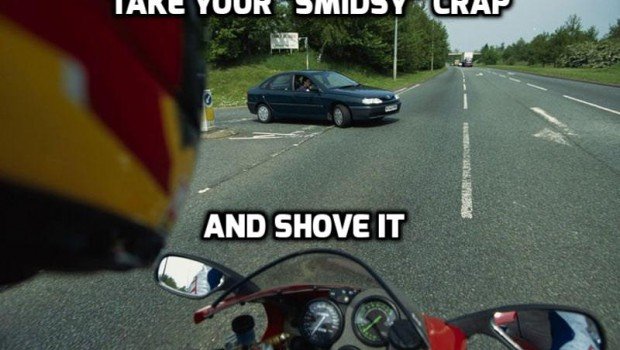 DON’T WANT TO DIE? Then stop this SMIDSY rubbish

As the days grow warmer and longer, fervent fair-weather riders are dusting off their leathers, de-cob-webbing helmets and shaking spiders out of boots. Passionately described as the Riding Season (in a country where you can actually ride all year long), the roads will soon be flooded by swarms of motorcyclists, knees and elbows flapping merrily in the breeze as they embrace the joys of two-wheeled mania.

And as the numbers of wanna-be racers and casual cruisers increases, so too do the laments and cries that as ‘vulnerable road-users’ every other motherfucker on the road is out to kill them.

Cars, trucks, taxis, cyclists, 4WDs, caravans, kangaroos, wallabies, wombats, gravel, wire-rope-barriers, white lines…the lot. They all hold a special fearful place in the minds of many who desire the danger of the motorcycle, yet crave the warm, cosy safety of a padded room at the same time.

And while most riders reluctantly accept the absence of soft, cushiony barriers in the event of a slide, those same riders simply cannot accept the truth that they may well not be seen. Instead, the cry is frequent and loud: “Taken out by another SMIDSY (Sorry Mate I didn’t See You)! When will these drivers learn?”

Here is the lesson.

It is hard. It is brutal. But it is still the lesson.

Yelling ‘SMIDSY!’ while lying on the road in a pool of your own blood will not teach the driver any lessons, nor will it prevent your life slowly departing as you whimper in barely-suppressible rage and pain.

If the driver of another vehicle is not looking, or looking and just not seeing, then no amount of screaming, fist-waving or fluoro will save you. However, understanding WHY a driver may not see you, may just save your life.

Several theories exist as to why SMIDSY is such a common excuse when a car and motorcycle collide. And in many cases, the driver probably was telling the truth, and even, dare it be said, driving to a generally competent standard.

Human vision is imperfect. Even those with the most excellent of eyesight have nothing compared to the animal kingdom. When we ‘look’ at things, our eyes send mostly blurry images to our brain, minus whatever is contained in the blind spot in the middle, and our brain makes sense of it (including making some assumptions about ‘normality’), and turns the images into a moving picture of how we see the world.

But this biological process partly explains why a driver is probably not lying when they declare “SMIDSY!”, and why, even with the very best of intentions, they probably won’t see a rider next time either – and motorcyclists make up such a small percentage of overall road-users. Even during Riding Season, many road users simply do not expect to see a motorcycle on the road (and can fair-weather riders blame them?).

What can riders do?

Firstly, accept that they are a minority, and as such, ride as though they are invisible. Every day. Every time their rubber hits the road. Expect drivers not to register their existence in their vision. Sure, there is a clear obligation on the driver to be alert and look properly, but with biology working against them, the rider is always the one who will come off worse, irrespective of their plaintive cries.

The human eye is only ever looking at a small area at any one time, and the images snapped of that area have to be processed by the brain. If a motorcycle is travelling quickly in a straight line towards the driver, there is a pretty high chance the driver simply will not notice the object is getting closer. Think of a hornet attacking. Think of your motorcycle as that hornet. Think of it zoning in with predatory precision on the driver sitting nervously at the intersection.

Now ask yourself why on earth you would do that if you actually wanted to be seen by a driver?

Additionally, there is some evidence from psychological studies to suggest that there is a relationship between an object’s size and the brain’s ability to judge the distance of that object. A smaller object is perceived as being further in the distance compared with a larger object. In one such study, participants reported that they believed a larger object farther in the distance would hit them before a smaller object, which was actually much much closer.

What does this have to do with SMIDSY?

Front-on, even the beefiest, meanest and bulkiest man-on-fuel-driven-beast will look like a wart compared to the road-train rumbling along behind him. Even the most buxom of ladies with the most rotund of rear will be dwarfed by a chunky 4WD towing a caravan.

And so the driver, if he actually perceives the motorcycle (complete with a fat, rumbling pipe and high-beams glowing), will perceive it to be farther away than the vehicle behind it. The first inkling they have of a motorcycle is when the hapless rider is smeared across the windscreen.

What can riders do?

Stop shrieking SMIDSY. Stop buying into that victim bullshit. Expect not to be seen. Ride as though you are invisible. Always assume you’re a pipsqueak in a world of thundering wildebeest.

No human is perfect, and human eyesight, while miraculous, is far short of perfect. No amount of SMIDSY advertisements, SMIDSY videos, SMIDSY campaigns and SMIDSY T-shirts will improve the vision of the thousands of road users who go about their daily business. Motorcycles, from the front or rear, are narrow, streamlined, and made to slice along the road like an arrow on speed. Is it little wonder they are so hard to detect by the ordinary driver?

Motorcyclists, on the other hand, have a huge advantage. Not only are cars, trucks, 4WDs and caravans incredibly common on the roads, they are also bigger, wider and boringly predictable with their driving. Motorcyclists have no excuse for not seeing a car in their path, and no excuse whatsoever for failing to anticipate the driver may not see them and turn into the rider’s lane.

Want to stop SMIDSY? Accept the truth. Accept reality. Open your own eyes and save your own life.