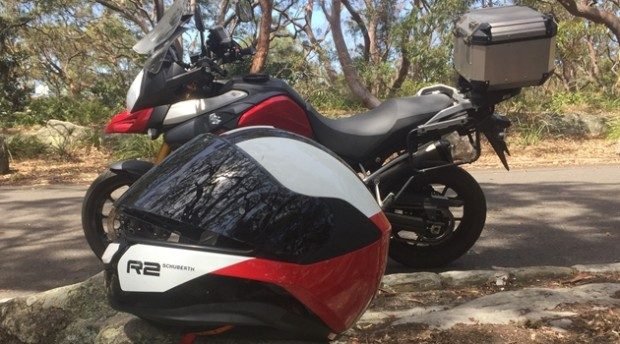 I first wore the Schuberth R2 back in August when I rode to near the Queensland border to attend Froggy and Suze’s wedding. I put the bike in for the 48 thousand service before I left, and last week I put it in for its 54 thousand service, so I’ve been wearing the Schuberth for close on ten weeks and six thousand kilometres.

It pressed a lot of buttons with me. I wanted a return to basics, but well made basics. “I blame craft beer”, I told Boris. “I’m starting to dread the next over-hopped pale ale someone pours for me. As soon as I finish it, I hanker for a good, standard, no-frills lager. The type the Krauts make. Or the Japs. A Hofbräu maybe, or an Asahi. Or a good old Aussie Boags. Standard is best.”

The R2 is the Hofbräu of helmets in a sea of over-hopped pale ales. 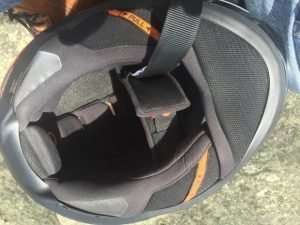 There is no integrated sun visor and such malarkey. There is a fibre glass shell, a ShinyTex lining (it’s supposed to keep you cool; it seems to work), vents in the chin and forehead area which you can adjust with a gloved hand, and “emergency quick-release cheek pads” so the emergency services personnel can get to your head after your aspirations out-run your talent. The visor takes a Pinlock.

It’s really light, especially for fibreglass: 1350 grams I’m told. It fits my head well. There’s little wind noise – much less than any of my other helmets. It’s cool in warm weather if you open the vents: there’s a series of channels inside that direct cool air to your scalp.

The light weight and quietness effectively reduce fatigue on a long ride. The view port is wide and peripheral vision is good. 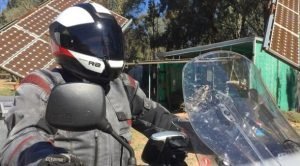 …my helmet of choice for any trip over 50km

There are some hidden extras. Inside the liner is a pair of speakers, a microphone and an antenna. You can buy a Shuberth SC1, remove a couple of plastic covers at the base of the lining, insert the SC1 and pair it to your smartphone or GPS; and never have a moment’s peace.

I love the thing. I won’t be getting the SC1 because I don’t like the tone in the voice from my GPS when she says “Recalculating…” But the R2 is my helmet of choice for any trip over 50km.

They seem to have gotten the hang of it. 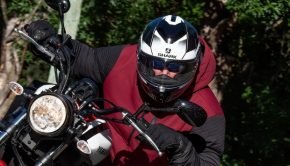