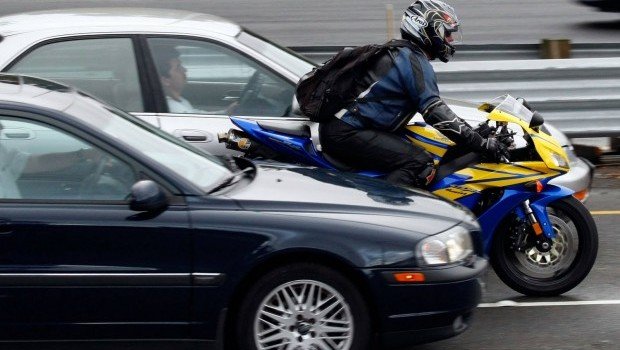 CONVERSATIONS WITH COPS No. 7543

So there we were. The police inspector and me. On the side of the road. In peak-hour traffic. Which was now gridlocked spectacularly because his unmarked car and my bike were blocking the left lane.

The inspector was very upset. He was angry and filled with righteousness and wrath. I knew this cos his hot spittle flecked my sunnies and he had bits of foam in the corners of his mouth, kinda like what horses get when you saw on their bits really hard and beat them with tomato stakes.

“You were having a great old time, weren’t you?” he thundered. “Swinging through traffic and changing lanes without indicating! You were doing 75km/h back there! I saw how you used the right-hand turn lane to cut in front of that car! That was utterly irresponsible! Do you know how many of you idiots I’ve scraped off the road? It’s my pet hate seeing you ride like that! What did you think you were doing?”

I’m old enough to know the inspector didn’t actually require me to answer any of his questions. So I looked suitably contrite and murmured how I was truly sorry.

“Give me your licence!”

I handed it over. He glared at it.

“Right, Boris,” he said, and I couldn’t help but know he would have shot me in the face had I replied: “What’s right, Barry? Surely not this first-name-basis thing we got going here?” but my mouth stayed zipped as he went on.

“The next time I see you driving like that, you’ll have a fistful of tickets and no license.”

And then he left me. But he left me wondering what would have happened had I suddenly decided to engage him by answering his questions and responding to his spit-filled diatribe.

Certainly there would have been a Tasering. Which would have been followed up by a handcuffing. And then there would have definitely been more yelling, some capsicum spraying and ultimately a good deal of charging, followed by bailing, lawyering and courting. I have been down that road before, so keeping my mouth shut, my eyes downcast and murmuring apologies was clearly the smart way forward.

“You were having a great old time, weren’t you?”

Well, yes. As much of a great old time as one can have trying to stay alive and not perish under the wheels of the blind, brainless retards it’s your job to police. And while I don’t think riding through peak hour is up there with carving up The Ox on a hot summer’s day and partying with strippers, I’ll take what I can get these days.

“Swinging through traffic and changing lanes without indicating!”

Please don’t be making things up. I used my blinkers every time. Just cos you didn’t see it doesn’t mean it didn’t happen, you know. And if you didn’t see my blinkers, then you’re not much different to the other herd animals in their cars. So much for being a trained observer, huh, Barry?

“I saw how you used the right-hand turn lane to cut in front of that car!”

Pretty bloody good, aye? I even impressed myself with that effort – and I am a veteran. Beats the hell out of sitting in traffic and waiting to be rear-ended by some fat mummy in a Pajero, let me tell you.

“That was utterly irresponsible!”

Please don’t use words out of context. It wasn’t irresponsible. Not even remotely. It was maybe cheating. And possibly daring. And certainly clever. But as a motorcyclist, I am responsible for my life, so please don’t pretend like I don’t know that.

“Do you know how many of you idiots I’ve scraped off the road?”

Do you know how much I don’t care? I’ve cradled the head of a friend who died in my arms. So I don’t give a rat’s ruined rectum about how you cope with your job.

“It’s my pet hate seeing you ride like that!”

My pet hate is people talking on mobile phones when they drive. At least 12 of them have driven past us while you’ve showered me in spit. You don’t see me getting all crazy about that, do you?

“What did you think you were doing?”

I was going home. Why? What did it look like? Look, Barry, calm down. I am a motorcyclist. I am not the problem. I am the solution. It’s about time you and your legions of Bible-packing gronkers worked that out. Do I have to chew your food for you too? How’d you get to be an inspector?