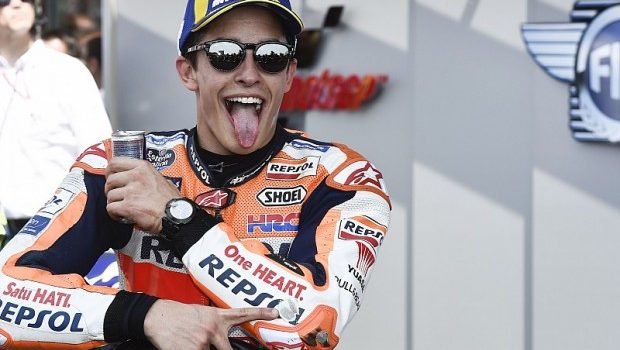 “But then I see what you did to the Dinosaurio Amarillo. You brake in front of him and he runs into you BAM! And almost you both die. Ha ha!”

That was a great race, huh? Of course, I make the very good win because I am the fastest, but it was good to see you up at the front for a little bit.

But then you become tired, yes? Like my father when he falls asleep in front of the TV and makes the snores, and some drooling comes from his mouth.

It is very easy to become tired when you are old.

But I like it when old people try very hard. Especially old Mombos like you, yes? My brother Alex and I were talking the other day after I tell him how mierde he is in Moto2 (I always tell him that because I love him and I want to him to come to MotoGP and race old people, like me), and I say:

Look how many old people are racing MotoGP! There is that Englisher with the eyes that look at the sky and the ground at the same time. I think sometimes he wants to hit me with a fork-leg.

Then there is my team-mate, that cute little Spanish one who looks like our cousin Maria’s doll. I think Maria would like to dress him up like a pequeño matador and make him do the corrida with the cat. Ha ha!

Then also there is that crying one with the sad donkey face who I let win a few times because I like the donkeys, and he is friends with the Dinosaurio Amarillo, who is older than the mountains, but is still sometimes almost fast and has very long legs and many of them.

And of course, there is you, the Great Mambi, yes? Somebody said you are also known as the Pliers and the Margarina. But he did not say why. I think it is an old person thing, yes? Ha ha!

Anyway, we make the very good race yesterday at the Assen. I almost fall off when Rins race into me, ha ha! I did fall off actually, a little bit. But is no big problem because I just keep making the race and is then OK. And then next lap I pass Rins very hard to say to him, “Come on then, coño! Show me how big your testículos are!” And they are not a bad size, ha ha!

I understand when you get old, the testículos they shrink a little and maybe they not work so much, yes? My father he says this makes his pantalones fit better.

This Mombu, I say, he must not care that all the fans of the Dinosaurio Amarillo will tear him to pieces if he hurts him. I know this because they have been trying to kill me now for almost two years, ha ha! But I am too fast for them!

And I am too fast for you also. But is OK. I like old people. They sometimes smell funny and they get upset at things I do not understand, but they leave young people money when they die, so this is a good thing, I think, yes?

I also think is very good we will be team-mates next season. Alberto has already said to me not to play the tricks on you like I play on the little dwarf. He says you do not have the sentido del humor, but I think you do.

I would say see you at Sachsenring, but I will not see you there. I usually do not see anybody there. I just go there and I then win and then I go home. Is great, yes? Maybe you can race with the other old people so they are not lonely?