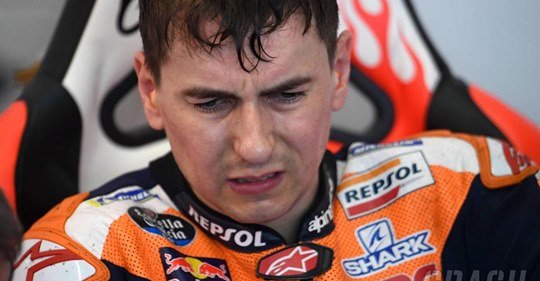 “Bradl beat you! Hello? Bradl. He’s been drinking beer and marching around in circles singing the Sound Of Music soundtrack for the last year.”

Please allow me to share in the joy of our company’s exciting win on Sunday in the Land of the Bleeding Bull With Swords In Its Honourable Neck.

I look forward to crying “Kanpai!” with you the very next time we fold our old knees on the tatami mats at Madam Hiromi’s House Of Dying Blossoms on Sakurada-dori Avenue.

I am also honoured and disturbed to include the transcript of a recording our HRC rider-assistance systems captured following the unfortunate result of the Number 99 rider we recently acquired in the hope of increasing our racing glory.

I respectfully submit we reconsider renewing the contract of the disrespectful Eskimo, Poo-eegah, who insisted we acquire Number 99.

But there is now no question about immediately consigning Number 99 to those hairy ronin at Suzuki, in the hope they may sign him and thus stop their sudden rise in the MotoGP.

Here is the transcript, so you may make up your own venerable mind:

Did your shameful collapse begin when you tried to ride into the Ducati pit during Practice? Is your helmet too tight?
Have you now become colour-blind with early-onset dementia as well?

Shut-up, stupid Eskimo. I only rode there to wave to Gigi because I know he misses me. And he misses me very much. I know this because he threw tools at me the second he saw me. It is how he makes the gifts of love and respect to his favourite rider. He never threw anything at Androzioso. And he will never throw anything at the police chimpanzee who is now riding the bike I developed.

Why did you tell everyone this was going to be the race on which to judge you? Was this before you decided to come almost last?

It was not my fault! I told you what you had to do to that worthless orange Honda many times!

“Poo-eegah,” I said and made the sign of your tribe over my left chest because I respect your Eskimo heritage. Then I said: “There is not enough dynamic feeling in the tyre telemetries, and the seat chafes my hammer. Also, when the rubber falls off the hand-twister, and makes the vroom-cutter that changes the speeding-arm position which will then not work properly, it has an impact on the exhaustial outflows from the valvadromical coupler. How could you not know that?”

“Did you sniff the valve paste again?”
SSSSS-chah, to you, Poo-eegah. Valve paste has no smell.

Bradl beat you! Hello? Bradl. He’s been drinking beer and marching around in circles singing the Sound Of Music soundtrack for the last year. He hasn’t really touched a MotoGP bike in ages. We even gave him Pedrosa’s dwarf-bike to ride in case you decided to become a shitlord again!

You are confused, Poo-eegah. Stefan Bradl is really Bradley Smith. The name is the same just written backwards to confuse Germans and Eskimos, but because you cannot properly speak the many languages, you do not see this.

All that truly matters is I beat the Yellow Puta!

No, you didn’t. The old donkey managed to get to sixth even though he started behind you on the grid.

So yes, see? I did beat him. Grid position is everything! I also beat Marty, and that stupid crying idiot, and that new child, Fabiobagnabidellelli.

I sometimes feel like I’m talking to a circus animal. Listen! Marquez won. Quartararo’s bike failed. Bagnaia crashed. Morbidelli came ninth and beat Crutchlow, who is now punching a bull in the face and refusing to surrender to the Spanish police. You came 12th after starting in 11th.

Tell me, stupid Eskimo. Can you even count? How many championships are better? Five or six? Nine or ten? This is how mathematics work here where there is electricity and the polar bears do not eat the children. I play the long game, Poo-eegah. Like a mountain whose head kisses with the clouds and rubs with the winds. Everything is on track for my championship this year. It is all mathematics.

Do you have Bautista’s phone number?

Who? Oh, that one who ran away to ride the Loser Motorcycles? No. But is on the door of every toilet in every paddock. Why do you ask? Do we need another criminal to steal wallets to pay the mechanics? Is Redding in jail again?

I commend this recording into your care, and bow my head in respect, Yoshishige-san.