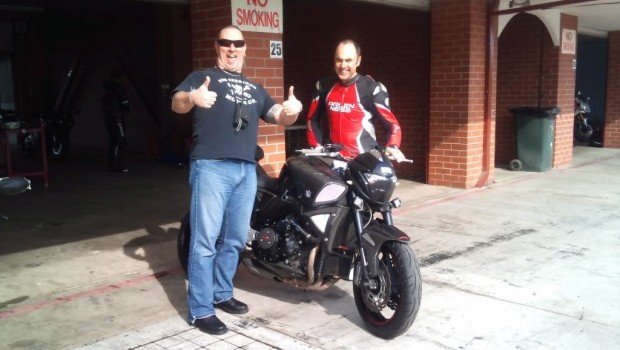 Long and long have I waited for news from the Cave of the Power Lord (also known to those who don’t know shit as Phil Tainton Racing) – and finally it came.

“Borrie, it’s Eoin from Suzuki,” said the voice on the phone. “Phil’s decided on what he wants to do with the B-King and I just wanted to check it out with you.”

“Tell Phil that whatever it is, it needs to be bigger and more powerful and more awesome and more offensive and more…well, more, than what he currently reckons.”

“Don’t be a woman, Eoin. This is not the time to get all squeamish with denial and buy a cat for comfort.”

“No, no, you don’t understand,” Eoin said. “Phil’s going to put the biggest big-bore kit he can get into it and…”

“How big?” I interrupted, twitching with the iron-clad knowledge that size always matters, has always mattered and will always matter – in everything from girls’ bottoms to grizzly bears.

I couldn’t possibly imagine what kind of obstacle would arise from Phil starting up his photon-fuelled power-speculum and reefing the motor’s guts out to the required size, but then I’m not required to know such things.

“Apparently,” Eoin continued, “no-one makes cams for such bores. So Phil has to make them.”

Images of the Power Lord, standing at his anvil, backlit by his all-consuming furnace, blows from his mighty hammer echoing through the seething, spark-rich dark as he hand-forges the required parts danced in my mind.

“What’s the problem?” I asked. “Does he need me to stoke the furnace or whip the slaves?”

“That’s fine,” I said. “I understand that creating cams hewn from Yggdrasil itself can be a time-consuming feat. But Matty’s getting letters from impatient teenage girls wanting to know what’s happening with the B-King.”

“Never mind. Tell Phil I am absolutely stoked he wishes to build a bike more brutally powerful than a supernova so that I can commute and tour on it.”

Then I rang Clive, the Lord of Powerbronze – purveyors of eye-meltingly gorgeous and life-affirming carbon-fibre for motorcycles.

“It’s time,” I said to Clive. “Phil needs to be submerged in carbon-fibre. It will take his mind off whittling colossally cruel cams.”

“What do you want?” Clive asked.

“Do you want the screen?”

“Do I look like a cat-owner to you?” I asked. “A screen is nothing but a miniature fairing, and we must remain true to the B-King’s original nakedness and refrain from any homosexual digressions.”

Clive immediately recalled that fairings were for pooftas, assured me the parts were on their way to Phil’s cave, and I was left to ponder what else would be required before the B-King became the B-Czar.

Naturally, weight is foremost in my mind. Especially unsprung weight. I’m confident replacing most of its plastic with carbon-fibre will produce an appreciable weight-saving up top – especially after Phil takes the standard exhaust system, kills it with an axe and puts something suitably racy and goose-pimplingly raucous in its place. And we will weigh the stuff that comes off and compare it with the carbon-fibre that goes on, but I would dearly love to address the unsprung kilos.

Clearly, carbon fibre wheels are a hugely desirable item. Carbon-ceramic brakes are too, as are ceramic wheel bearings – but while all that’s worthy of serious groin rash, it’s important the bike remain grounded in some kind of functioning reality. After all, it will be used daily and it will tour as well as commute, attend track days and visit the drag strip.

Obviously, it therefore needs a pair of gigantic eff-off driving lights, Oggy knobs and a Ventura rack to go with its 1500ccs of feral nastiness. Oh, and Shawn Giles did ask that I find some stickier tyres for it – but then he’s always concerned about stuff like that.

So that’s where we’re at right now.

I am currently indebted to the good graces of