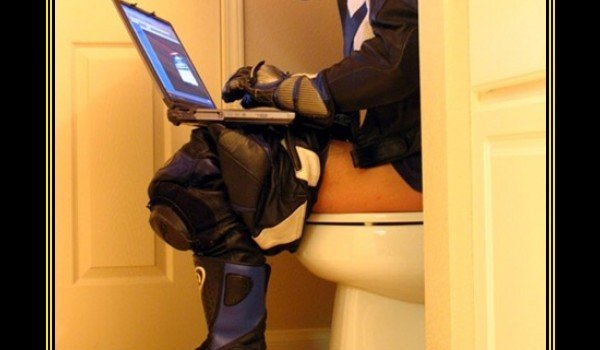 Hands up those of you who took up motorcycling because it was a safe and economical way of getting around.

Yes. OK. Go stand over there.

Now, hands up those of you who think fluoro vests and all the passive safety gear your credit card can buy makes you safer on a bike.

Good. You lot go and stand with the other idiots.

Let’s now have a show of hands from the people who think there’s always some external reason why you fell off your motorcycle. You know, like the car didn’t see you, or there was gravel on the road, or you had new tyres, or the camber on the corner you missed was all wrong?

Excellent. Please go and join the burgeoning crowd of arseclowns who are now milling in confusion and angrily trembling with the intent to write hysterical emails to AMCN calling for my instant dismissal.

How’s that worked for you in the past?

Pretty much like motorcycling then, which is not working for you at all, and which subsequently begs the question: Why are you even doing it?

Because you’re not doing it properly.

Yes, yes, I know that there are lots of you stiff-backed, frozen-in-place mouthbreathers spearing off our roads and into poles, trees and car radiators every weekend. But just cos there’s lots of you, doesn’t actually mean you have any right to ride among us. You are like cockroaches in that regard, and have, through your government-backed proliferation and ensuing ubiquity, become the vermin of the motorcycling world.

I see you all the time. I read your vacuous garbage on various “motorcycle” forums (which should actually be renamed “forums full of insufferable dickheads who own bikes”) and on any Sunday, I see you all clustered in various Macca’s carparks preparing to head out on the roads and crash your worthless brains out.

You are the ATGATT (All The Gear All The Time) morons. You should rename yourself ATGANFI (All The Gear And No Fucken Idea), as my mate Frog suggested. 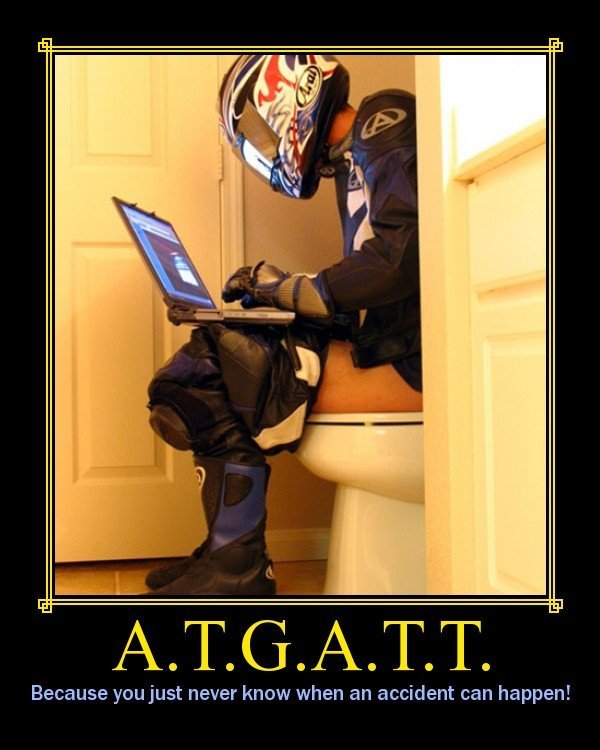 Because what none of you imbeciles seem to get is that not all the gear on this great planet, covered by all the fluoro ever made, is going to save you from, or make up for you being a crap rider. And as you’re being turned into a greasy kebab under front axle of a nice truck, you’ll be shocked to find your smarmy ATGATT attitude contributed absolutely nothing to preventing you from exchanging fluids with a big black Goodyear.

“Oh, but it will mitigate the injuries,” I hear you squeal, as if that’s some kind of defence.

Not falling off will mitigate them a lot more, don’t you think?

A few weeks ago, some mates and I took an L-Plater out for his first ride. Paul bought a bike on Wednesday, on Sunday he was busily clocking up a 500km day.

Normally, my mates and I head for roads that are joyfully free of the ATGANFI garbage. You might have to ride a bit further out, but that’s a small price to pay for cop-and-fool-free bitumen.

But this Sunday was a little different due to Paul being with us, and we ended up on our way to Wollombi, which as any Sydney rider knows, is a very popular place to ride to on the weekend.

As we approached the notorious Lemming Corner, we noticed a red roadwork traffic light, and three bikes. Two R1s and a Gixxer. All piped up and growling between the thighs of the most gloriously attired ATGANFIs ever. Their brand new top-shelf leathers, boots, gloves and helmets were just breathtaking, and my friends and I had lots of time to admire them, since the red light was taking its sweet time.

Then it went green, and because I had a VMAX, The Door had a Rocket III, and Crew had a Speed Triple, we all raced the ATGANFIs to the first corner, and on towards the pub. Which is what happens on any Sunday.

Apparently, as Paul the L-plater told me when he got to the pub, being rounded up and bitched by smelly open-face helmet wearing, not-thinking-of-the-children scumbags on very large and stupid non-sports motorcycles apparently caused one of the ATGANFIs to take fright. So he crashed on the third corner after the red light at about 30km/h. Right in front of Paul, who was wobbling merrily along as L-platers do.

“Why did he fall off,” Paul asked. “It’s not like he was going very fast.”

“He fell off because he was a dickhead that couldn’t ride,” I answered.

“But he had all that really nice gear. He looked like he could really bang.”

“Looks are deceiving,” I shrugged. “Those ATGANFI knob-smokers are like fake boobs. Fake boobs look sensational in dresses and sexy tops. But they are masters of deception. Get them naked and alone and they’re nothing but sad, misshapen fleshsacks of no integrity. They promise much, but deliver nothing and invariably disappoint with their performance. Just like the ATGANFIs.”

I wish you all a great and good festive season.