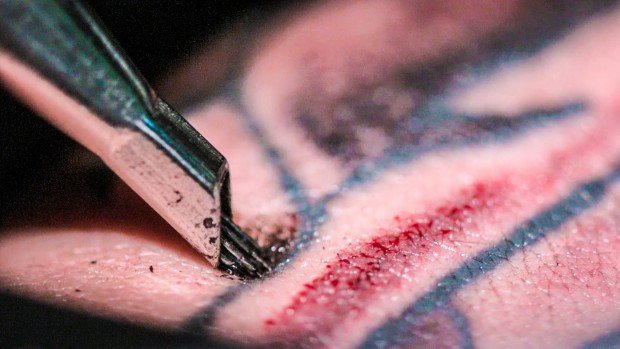 AND SO FREEDOM DIES IN QUEENSLAND

It has been over a year since the glorious deposal of former Premier Campbell Newman and his baby-faced Attorney-General Jarrod Bleije. Yet their festering stench remains, thanks to the suite of abhorrent and draconian laws which strip away the basic human rights of thousands of Queenslanders.

Under the guise of combatting organised crime, the lily-livered pair, egged on by a vindictive and arrogant Taskforce Maxima, embarked on a vicious personal vendetta to destroy the lives and honest livelihoods of men who have committed no crime.

The target of the social cleansing operation is, and was, no secret.

Bikies: Motorcyclists and their friends who dared to be a part of, or associated with, so-called one percent clubs.

Following a public biff on the Gold Coast, and spurred on by the vicious and sensationalist Courier Mail, in October 2013, the then-Liberal National Government swore to do everything within its power to wipe out anyone who did not conform to Bleijie’s personally defined cultural norms.

Tattooed bikies, with their grunting black machines and leather patched vests, were declared to be so scary, intimidating and frightening, that the only way to keep Queenslanders safe was to ban them all.

It didn’t matter to Newman and Bleijie that over two thirds of club members have never been convicted of a crime (and the majority of convictions being traffic offences and minor public offending). It mattered even less that ‘bikies’ were, and still are, responsible for less than 1% of all crime.

It mattered not at all that bikies accounted for such a miniscule amount of organised crime, even if the laws had been effective at stopping those members who dabbled in something nefarious, it would have had practically zero impact on organised crime as a whole.

It didn’t matter in the slightest that no one, not even officers from the Queensland Police Service could tell the difference between a bikie, a biker, or a commuting motorcyclist. 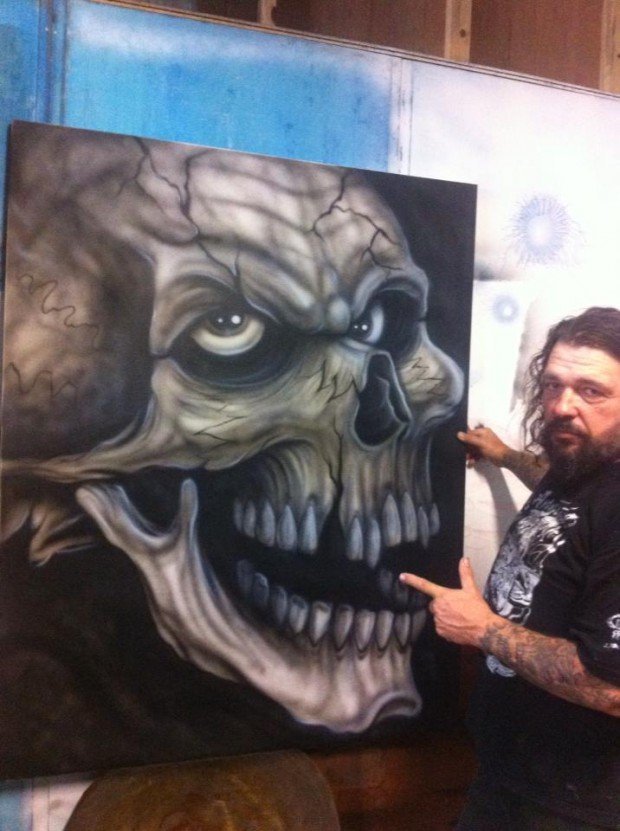 Mick Kosenko and one of his pieces.

No, Newman and Bleijie’s reinvigorated War on Bikies ignored all evidence and the Queensland Police Service’s own crime statistics. It ignored longstanding, fundamental legal principles, and declared all bikies to be criminals, a grave threat to law and order, and a danger to women, children, and the men who were plainly tasked to protect them.

And so, with the stroke of pen, ordinary Australians, good law-abiding citizens, who had never committed a crime in their lives, became criminals by arbitrary declaration and legislative order, simply because of their membership of a club or association.

Those affected were classed as ‘participants’, and the definition of ‘participant’ was very broad indeed, and immediately given the most liberal interpretation application by the over-zealous and obsessive officers tasked with upholding the repugnant laws.

The sanctions were harsh, unforgiving and unrelenting. Bans on associating in public with two or more participants, restrictions on wearing fashion items in bars, extra jail time for summary offenses, prohibitions on attending certain places, like clubhouses.

And most sinister of all, for those working in certain industries, a ban on carrying on a lawful occupation if the person failed the ‘fit and proper person’ test, as declared by the Commissioner of Police, who, in his assessment, is entitled to take into account secret criminal intelligence. Appallingly, the person so deprived of their livelihood is never told why and never given the opportunity to challenge the information relied upon to destroy their entire career.

When Newman lost power after just one term, the new Labor Palaszczuk Government undertook to review the laws, and with a wishy-washy non-committed half-promise, declared that something would be done.

Yet despite the review, the loathsome laws were, and still, are religiously and persistently upheld and applied by the QPS. Despite zero convictions other than for fashion offences; despite cases being thrown out because the arresting officers were more intimidating than the so-called bikies involved in the offending; despite laughable and tenuous links between alleged ‘participants’ and any arbitrarily declared motorcycle clubs, the QPS continue to harass and intimidate motorcyclists with ever-increasing fervour and renewed vigour.

At the end of March 2016, an independent review, led by Retired Justice Alan Wilson, was made public by the Government. There is no doubt whatsoever that the laws had little impact, if any, on organised crime. The report handed down by Wilson categorically found that the suite of laws had not worked. 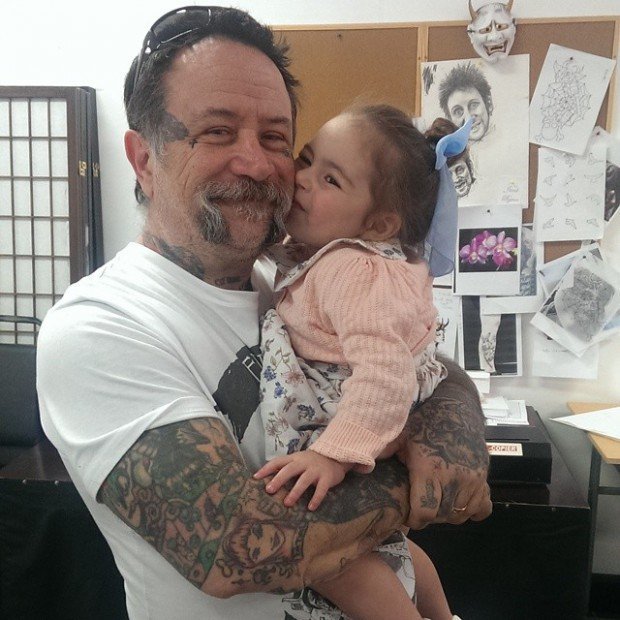 Angelo and his granddaughter.

Yet mere weeks after the Report was made public, two highly prominent tattooists and business owners were declared to not be ‘fit and proper’ persons, despite neither having any criminal convictions at all.

“I have been informed by mail last Friday that the QPS says that I am not a fit and proper person to own or work in a tattoo studio, therefore I have to close my business down.

20 years of my life in that spot is gone, just like that.

Two tattooists that work for me are now out of work, just like that.

This law has got nothing to do with being just , it is plainly an act of vengeance by the government and the QPS. They do not like us. It’s personal.

Thanks to all of my clients over the years for your support.

See ya on the road.

Twenty years. An entire career. Gone. Just like that. And for what? Petty vindictiveness and a social cleansing operation based on the personal views of man with a fetish for unbridled power, and complete disrespect and contempt for due process and legal protections refined over hundreds of years to protect the innocent.

Garozzo, joins Mick Kosenko, an internationally renowned tattooist, who just happens to be the Queensland president of the Rebels, and 12 other tattooists who were deemed not to be ‘fit and proper’ to carry on a lawful business.

Neither Garozzo or Kosenko have criminal convictions. Both men have spoken out loudly and clearly about the terrible laws. Both men were left dangling for nearly two years, while the Commissioner slowly tightened the noose around the necks of their livelihoods.

Contrary to Newman and Bleijie’s continued assertions, tattoos are not the domain of the criminal underclass. Just over 14.5% of Australians have tattoos; men and women alike from all walks of life, with one in ten people getting their first tattoo when aged over 40 years. The tattoo industry is reportedly worth $93 million and employs over 2000 people.

Tattoos are art and tattooists are artists.

Imagine, if you will, any other artist – perhaps someone who fits Newman and Bleijie’s conservative definition of socially acceptable. Perhaps they paint with watercolours, or rich, vibrant oils. Perhaps they work only with ink or copper prints.

Imagine, this artist has spent decades refining their craft, practicing their skills and perfecting their style.

Imagine, people come from across the lands to purchase the works of the artist.

They are respected by their peers; their work is admired by strangers.

Then one day, an ideologically driven twerp, hungry for power and infamy, deliberately blind to facts and evidence, passes a law to ensure that the artist will never practise his or her art again.

The continued application of Newman and Bleijie’s laws flies in the face of every concept of fairness, equality and justice.

Countless raids, searches, investigations and blitzes have done nothing to shift the statistics in the Government’s favour. Try as they might, the police still cannot pin any crime on these men.

The Queensland Police Service is either grossly incompetent, or there is nothing to find.

It is simply abhorrent that an honest person can lose their entire career and livelihood based on the word of the Police Commissioner, with no right to access the information on which the decision was made.

It is well known that the greatest causes of miscarriage of justice are due to police fabrication of evidence and eliciting false confessions from suspects. Yet here, there are no checks and balances to determine the honesty of the witnesses, the credibility of the evidence or the veracity of the information.

There are no other circumstance where a person can lose their entire career, their income and honest livelihood, simply based on reputation or association, where no offence or crime has been committed. Even those suspected of professional misconduct, poor performance or gross misconduct in the course of normal employment are given greater access to justice, fairness and due process.

The refusal to grant Garozzo and Kosenko a licence to tattoo is simply an attempt to appease an ill-informed public in a populist game of power and control. It is the work of a petty, vindictive and incompetent Taskforce who despite extra powers and resources, still couldn’t find anything to arrest these men for.

It is nothing more than a vile punishment meted out by a government which cannot secure any convictions under the repulsive laws, and so has to publicly seek retribution against the innocent.

The situation is disgusting. It brings shame on every Queenslander and every Australian.