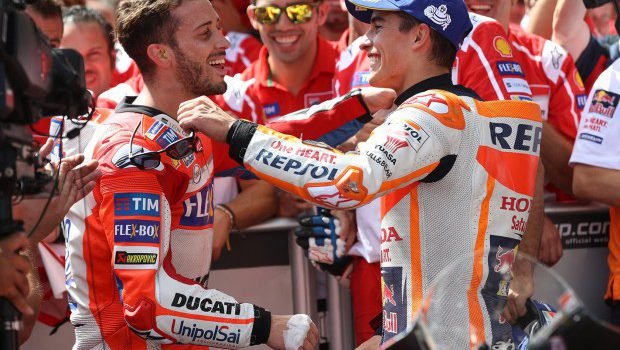 “And no, Rossi is not ‘crying like an orphan girl whose parents were murdered by pirates’…”

What have you done with Andrea?

You haven’t locked him in that cupboard where you keep all those pictures of yourself again, have you? He cried for weeks the last time you did that.

Matthias wants to congratulate him for his win. Just think, had you kept leading, he might have been moved to congratulate you, instead of calling his friends in Poland who run that special retreat he wants to send you to.

Still, 11 laps at the front is pretty good. You must have been very pleased with yourself. It was hard to tell. When you came back into the garage after you placed fourth and started yelling about the stupid French putas who make tyres out of snail-cheese, and how you’re going to drive to Clermont-Ferrand and feed Michelin’s CEO, Jean-Dominique Senard, to the biggest pack of stray dogs you can find, you looked pretty upset.

Don’t be put out. You did very well. Fourth is pretty good, all things considered. You beat Zarco and Vinales. You hardly ever beat Zarco and Vinales. And you’re seventh in the championship with 79 points. That’s only 95 points behind Marc. You only have to win the next four races in a row, and Marc, Maverick, Vale, Dani, Johann, Jonas, Danilo, and Alvaro all have to crash in those races and the championship is yours – as you have predicted it would be.

Look, I got that clown costume you asked me to get for Sam Lowes. It’s very thoughtful of you to offer him a job as your court jester, but I don’t think he will enjoy wearing those big shoes and the silly red nose while he tells you dirty jokes about Valentino Rossi’s mother.

And no, Rossi is not “crying like an orphan girl whose parents were murdered by pirates”. It’s also unlikely he’s self-harming, even though I know you think you can hear him through the walls of his motorhome dragging razor blades across his forearms. You know perfectly well Lin doesn’t allow razor blades anywhere near his racers.

I’m also not in favour of giving Marc a big fruit-basket for almost wiping out Andrea on the last corner. You don’t want people to think you had something to do with that attempted pass, do you? Just let it be.

Now tell me what you’ve done with Andrea. I can hear whimpering, but it’s hard to tell where it’s coming from. Please tell me he’s in your cupboard and not underground somewhere. You know how dark, constricted spaces frighten him.

Once we’ve celebrated his win – no, of course you don’t have to come – the crew and I will take you out for a few sangrias to toast your fourth place and the fact you led for all those laps.

But we have to celebrate with Andrea first. Now tell me where he is.