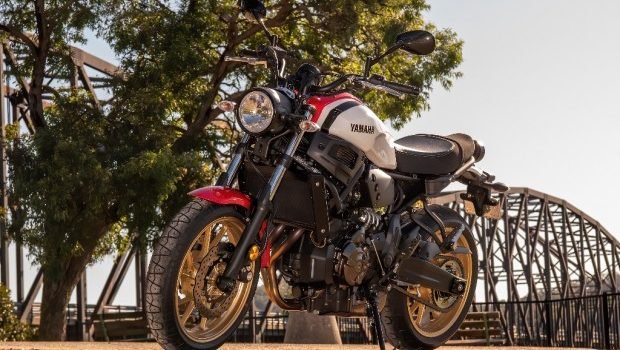 IMAGES BY NICK ‘WHY DOES THAT POLICE CAR KEEP CIRCLING BACK?’ EDARDS 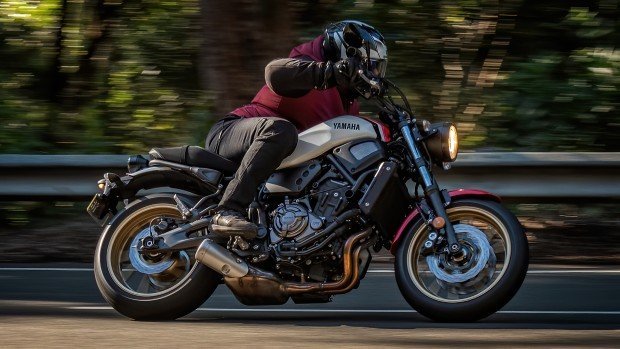 I should have put an L-plate on for shits and giggles.

To my aged and road-blasted mind, there are two kinds of Learner Approved Motorcycles (LAMs) on the market.

The ones Learners should be buying, and the ones they’re wasting their time on.

The best LAMs are the ones which prepare you for the real deal after an inordinate time in the wilderness trying not to die.

The worst ones are the ones which don’t prepare you for anything except riding ill-handling, poorly-thought-out filler models from manufacturers who don’t really get what a LAM should be and what it should do, and are just filling a perceived hole in their range. 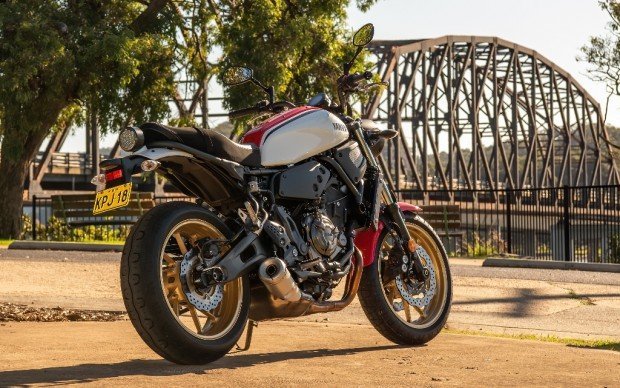 You’ll know that bridge pretty well by the time you finish with your Ls.

Yamaha gets it, which is why it builds one of the best (and hence one of the most popular) LAMs in Australia – the XSR700.

Yes, this is a 700cc (well, 655cc) LAM. And bragging rights when it comes to capacity are everything when you’re 17-years-old and your mates are riding pissy little 300s and 400s. Size matters. It’s nonsense to think it doesn’t. 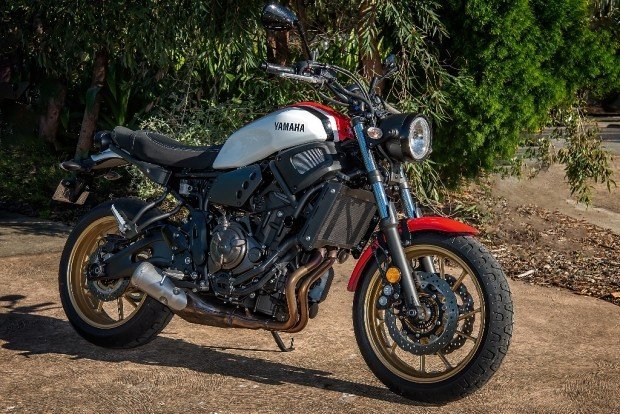 How cool would it look with spoked wheels?

But most importantly, during that very steep learning curve, it will not try and murder the Learner if he makes an indiscretion and has to rely on the bike’s integrity to save him. 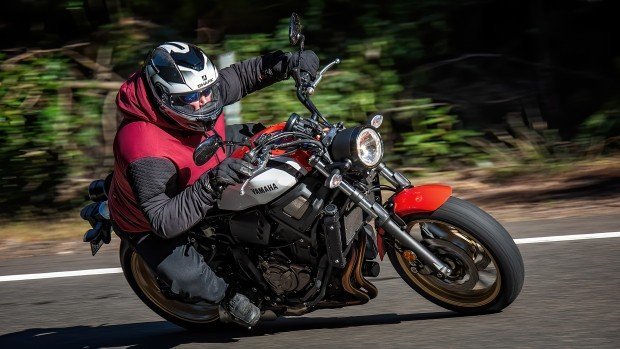 For an old warhorse like me, being able to wring the neck of a motorcycle like that is hugely satisfying, which is why I fired my XSR700 up and down Mother Putty and Wollombi more times than I cared to count. I rode the screaming buggery out of it, grinning and patting myself on the back at being able to maintain a high corner speed, and steady and very sassy lines through the hateful Ten-Mile.

Nothing much wrong with those retro-looking Pirellis, either. 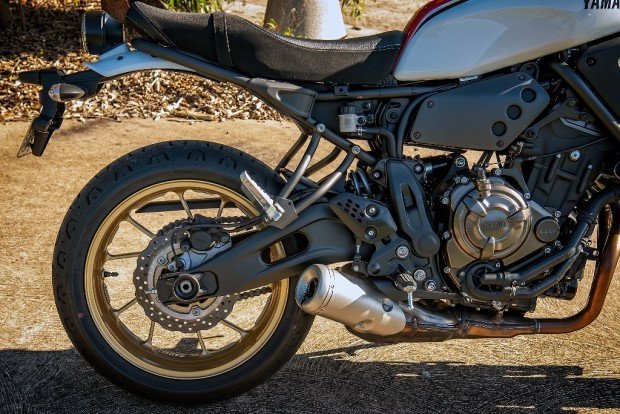 The rear linked monoshock is attached to the engine, which is a good thing, but you can see what I mean about where there should be a sidecover. Still, lots of places to tie things to.

Once, when the world was young, Pirelli tyres with that tread pattern where the nil plus ultra of motorcycle tyres. Everyone who was serious, or thought they were serious, had them on their bike. And when the Silver Dot variant became available, there was a universal orgasm of want. 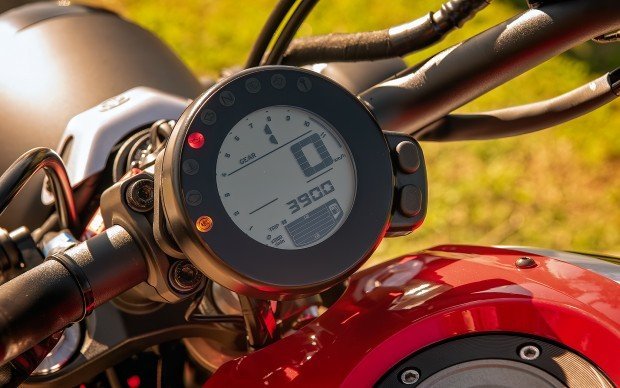 All the info you need, none of the maps you don’t. But if it could swap places with the ignition key, it would be easier to glance at.

Tyre technology has advanced so much from that time, the only thing that remains familiar is the tread pattern. These Pirellis are light years better than what we tried not to die on back then. I even had a chance to give them a lash in the wet. The combination of excellent water dispersal and the gentle power delivery meant the XSR is remarkably sure-footed in the rain.

In the dry? I feel I did not disgrace my ancestors. 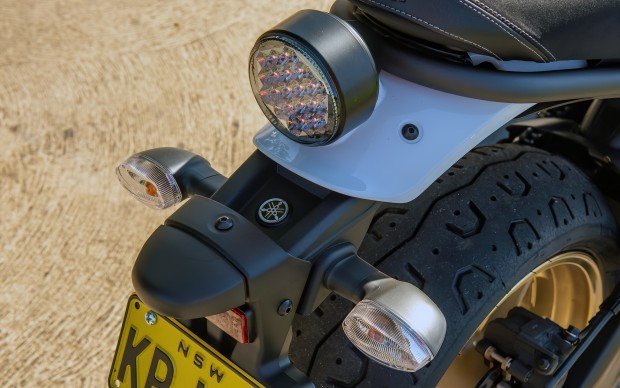 The LED tail-light was not popular among old people. I liked it.

But Learners should not be bothered about that too much. Just know that as your skills improve, the XSR is more than up for some shenanigans.

The suspension is totally fit for purpose, and while the seat is not as plush as my ageing buttocks would have liked, it’s fine for a solid 500km day. Younger bum-hams will have no issue finding accord with the handsome, slim, two-tone black jobbie. 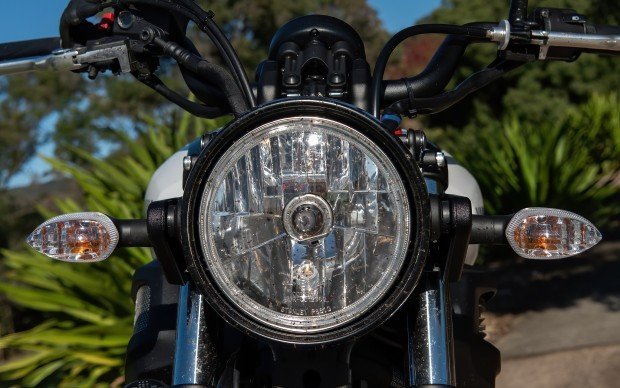 The brakes, fancy-looking wave-rotored jobbies, are also like that bowl of porridge in Goldilocks. Just right. You’re not ever banging hard enough to need high-end stoppers, but if you do come in too hot, these will not unsettle you. There is no savage bite – just progressive stopping while your heart is pounding like a terrified drum. Stay cool and lean harder. The XSR has this.

The clutch is light, the gear-shift precise, and take-up is smooth – so you shouldn’t drop it too many times in the servo or at the lights. 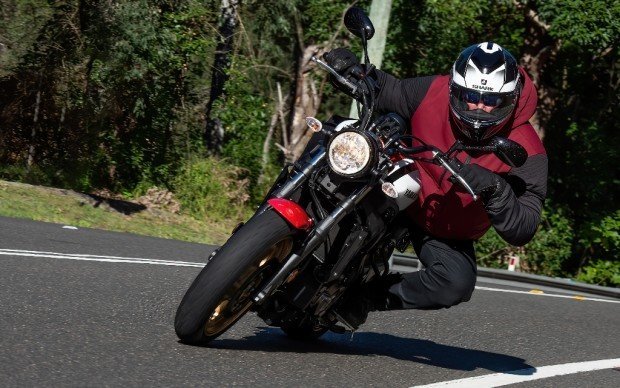 Oh good. Nick is standing in the middle of the road again.

The paint is stunning. It’s very reminiscent of the legendary two-stroke LCs, and I think Yamaha may have missed a styling cue here by not whacking a side-cover on which would have given the XSR some continuity from front to back. The paintjob really is trick and I would have liked to see more of it.

I didn’t mind the gold wheels either.

The headlight and I did not gel. Well, not the headlight per se, which is pretty reasonable at night. It’s where it’s mounted. I could help but wish it sat a little higher.

I felt the same way about where the dash was mounted. It could have been moved a touch forward, which would have saved the Learner from having to drop his head to marvel at the speed he or she was travelling at.

There are, of course, no engine maps or electronic suspension adjustments the Learner needs to worry about. It’s simple and basic, just as it should be at the start of one’s riding career. Be thankful it’s got ABS, which will save you more times than you imagine. 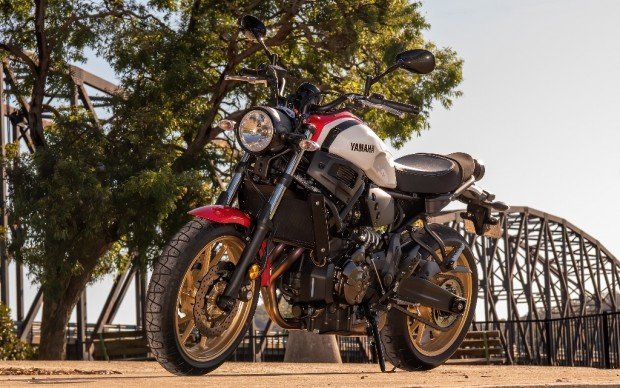 Looks pretty cool from this angle.

So that brings me to the fact that these simple styling issues I have with the XSR could actually be a cunning plan by Yamaha.

You will recall the XSR was always intended to be a bit of a blank canvas for owners to stamp with their own touch. I expect Yamaha envisaged those owners to be the now-largely-dead Hipsters, who have pretty much disappeared up their own ironic avocadoes in recent times. A huge, world-wide disappointment, no doubt. They had so much to offer.

But the concept of a blank canvas remains sound.

What 17-year-old firebrand doesn’t wanna personalise his or her bike? I spent many crazy hours in my shed with my first bike doing unspeakable things to it to make it mine. I learned many things this way. Some things I had to learn over and over. But in the end, I made my first bike, MY bike. There were no others like it. 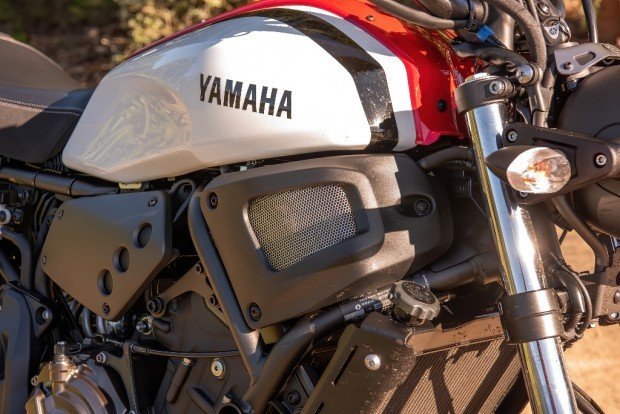 Air comes in via here. The air then goes into a dark place and is compressed into hatred.

This is the place the XSR lives. There’s quite a lot of potential in its basic lines. From some angles it looks great, from some it looks a little awkward – well, to my mind. People on my social media were much the same. Some adored it. Some felt it was lacking in areas.

The strange round tail-light copped a lot of flack, but I don’t mind it. I’d put a Punisher sticker on it and ride on, pleased with my statement. 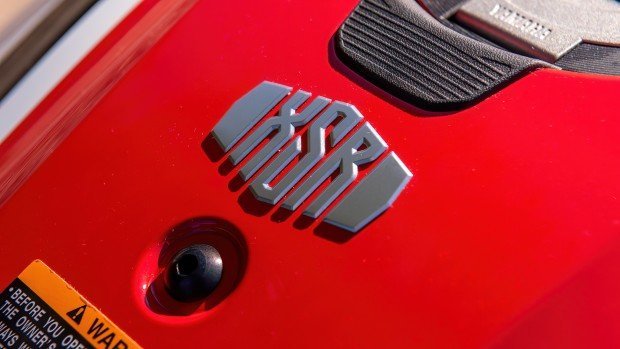 Ignore the warning sticker. Admire the quality of finish.

It’s a mere 186kg wet, ain’t too tall with a seat height of 835mm, and is slim and agile enough to make commuting a breeze – even if the traffic might scare you a bit at the start. Like all Yamahas, it is rock-solid in terms of reliability, has enough torque to overcome the wrong gear you might be in, and will always act like a real, grown-up motorcycle as you learn the ropes.

And years later, maybe when you’re stepping onto a podium, or being pushed into the back of a paddy wagon after a three-hour police chase through some killer twisties, you’ll be grateful you’d bought it. 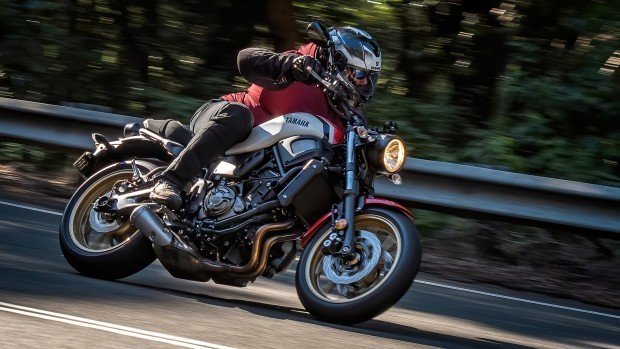 It’s quite a lot of fun, this motorcycle-riding business.

THE MOST IMPORTANT QUESTIONS ANSWERED

Those controls and that falling thing?

Like blessings tumbling from the hands of Lord Jesus himself they will fall into hands still soft from youth and unscented with the moisture of evil women.

The creaminess of the torque?

Just pay attention to the road. You have all the torque you need at this stage. And it’s creamy enough for the likes of you.

The paint and its glistening?

Yeah, pretty magical. Your girlfriend has lip gloss that isn’t as good. Oh, you don’t have a girlfriend? You will soon enough.

WHAT COLOURS DOES IT COME IN? The colour you see here. That’s it. Bunnings will sell you cans of matte black though.