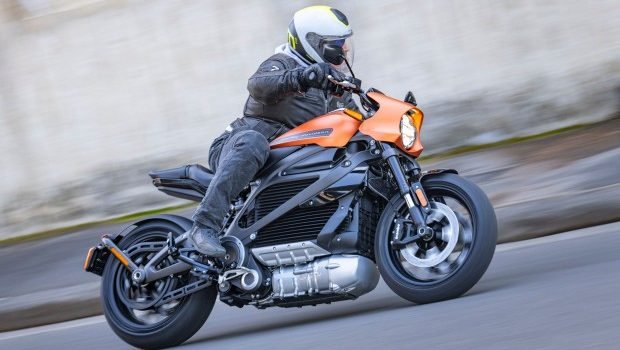 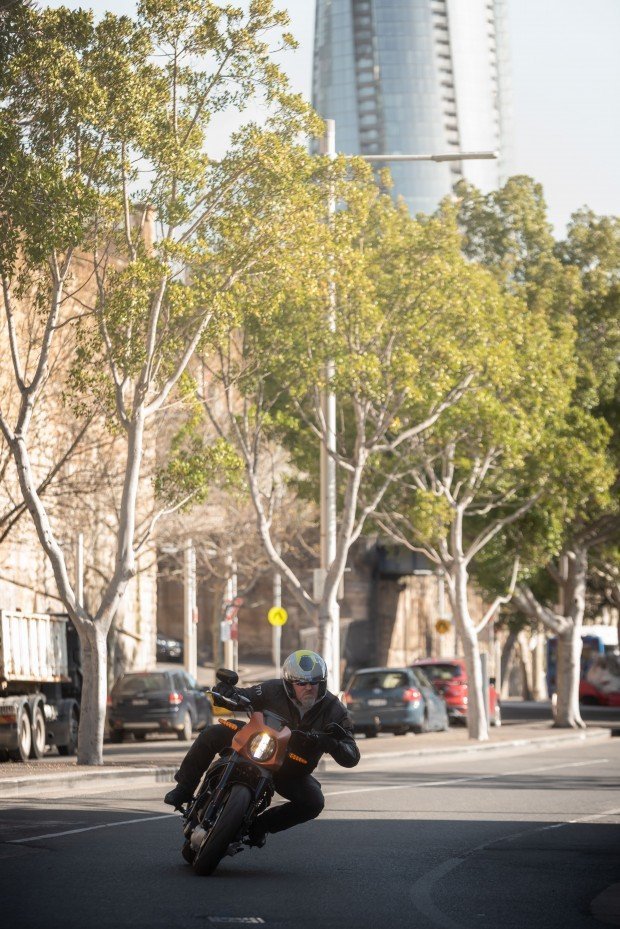 The speed limit here is 40.

Here was the world’s most iconic motorcycle man-brand, sailing vigorously into what its core customer base viewed as a betrayal – presumably of its right to dress as fake one percenters and conduct parades.

What the Hell was Milwaukee thinking even?

What am I gonna sew onto my HOG vest? Charge Master? Electric Champion?

The angst and condemnation was staggering.

I was not a fan myself, but for completely different reasons.

I first rode the Livewire four years ago at Sepang.

No, not at the track. I rode it around the car-park and part-way up one of the access roads – and you may read that epic travelogue HERE. 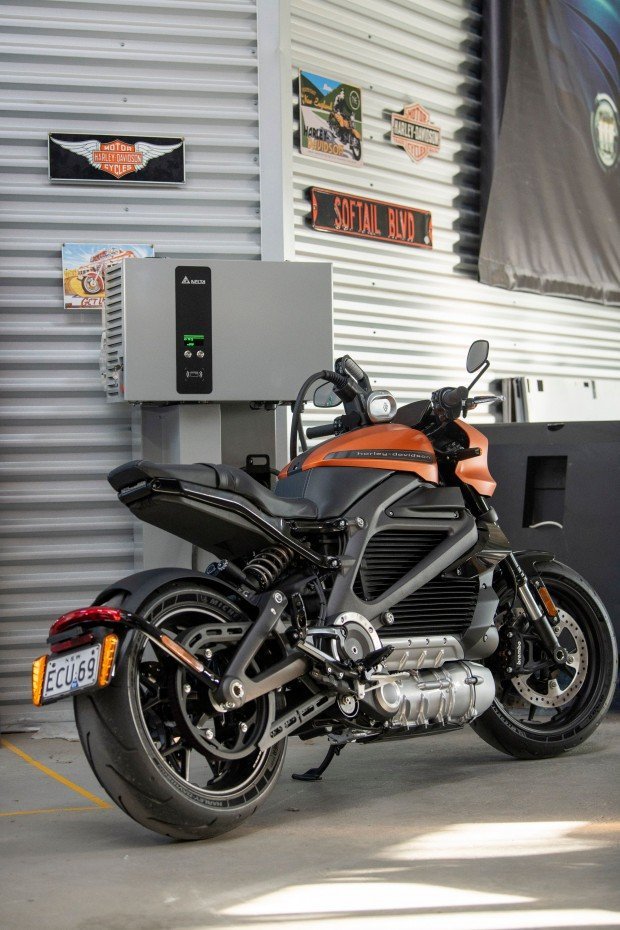 The Livewire awaits the injection of volts. Or amps. Or sparks. Via that big grey thing behind it. 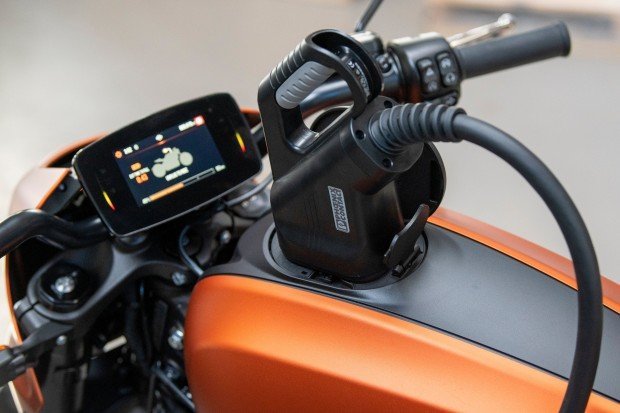 And here it is being zapped. Sadly, a silent exercise. I was hoping it would hum or go “GGZZZZZ!”

I found it intriguing, because electric bikes are certainly that when you’re used to combustion engines. But other than stating it was a brave move by Harley-Davidson, I felt the Livewire – and indeed any electric bike – was more of an appliance than a motorcycle. I also said it was like riding tinnitus – which is that annoying whine some people get in their ears.

I was not then and am not now, a fan of electric motorcycles. But I guess these are exactly the kind of people who should be invited to the press launches of these things. After all, conversion is always possible.

WHAT IT IS AND WHAT IT’S NOT

And when the invite came, I was actually quite keen to have a proper ride on the Livewire. Maybe I had been too hasty after my Sepang experience. Maybe I had been too judgemental of what is very much the future of all personal transport.
I spent a day, and somewhat less that 160km on the Livewire. And it was all mainly city riding, for reasons which I’m sure you will understand when I explain them. 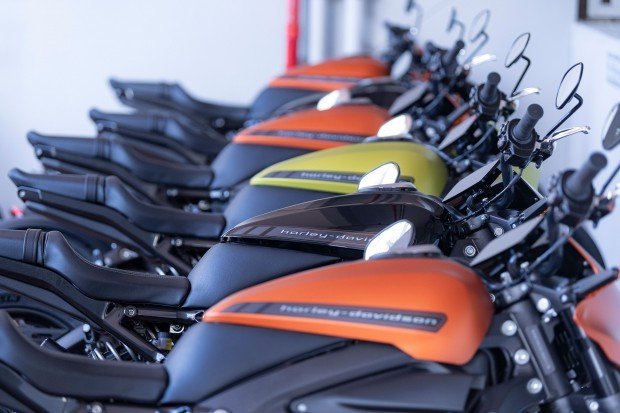 This is what I can tell you the Livewire is…

It is one of the hardest and fastest accelerating (up to a limited 170-odd km/h) motorcycles you can buy right now.

It will blow your mind – unless you’re a superbike rider, in which case you will still be impressed. Its 116Nm of torque and 105bhp is available instantly and will fling you at the urban horizon with pure venom. 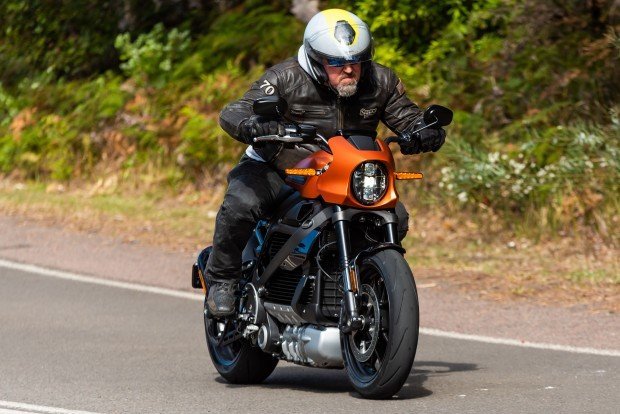 It made me giggle. And seeing the expression of the Harley riders also on the launch, then made me laugh out loud. This was acceleration they had never even conceived possible. It terrified them and made them chatter excitedly. I have no doubt their reviews will be all about the Livewire’s phenomenal acceleration and how it’s changed their lives. Which is to be expected from people who’ve never ridden anything else. 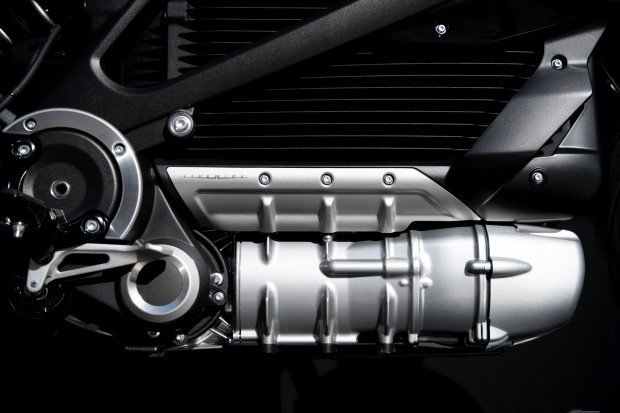 That’s the longitudinally-mounted engine. The black thing above it is the battery bank.

I can also tell you the Livewire is a very polished and up-market bit of kit in terms of finish. Harley is marketing it as a “premium” motorcycle, and the price tag of $50,000 certainly reflects that position.

It has a full colour TFT display with Bluetooth connectivity, so your Smartphone becomes your infotainment system offering calls, music, and turn-by-turn navigation. 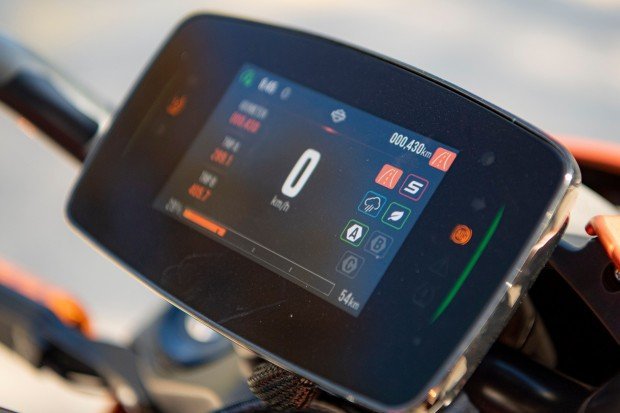 On the right are the six engine-mode icons, Urban, Sport, Rain, Leaf (or Range which is the economy mode) and A and B, which are the custom modes.

So, that’s what the Livewire is.

Here is what the Livewire is not.

It is not a touring motorcycle – or even a viable Sunday scratcher. Its range (about 160-170km) precludes me even riding it home to Singleton from Sydney. And even trips of that length suddenly become two-day wait-fests as you bide your time recharging it. 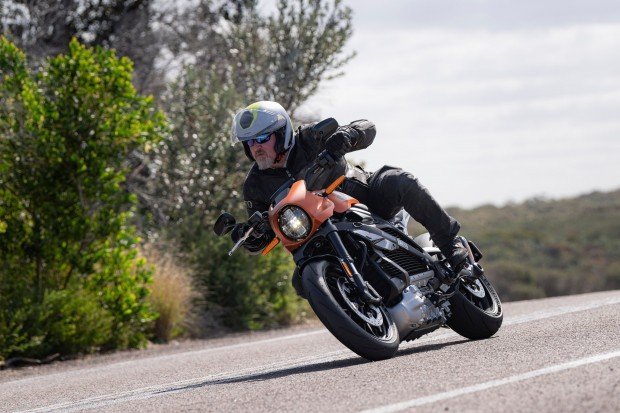 There are two ways to do this charging.

AC charging, which is what we have in our homes, and what customers will be doing every day, requires time. The spec sheet tells you it will take one hour of charge time for every 15km of range. So from zero to 80 per cent of charge will take 10 hours. You want 100 per cent? That’s 12.5 hours.

If you use a DC charger, like the ones at some Harley dealers, or the ones that are steadily cropping up in shopping centres to cope with Tesla cars, then it’s a faster charge. One hour from empty to 100 per cent. And if you have three-phase power in your home, you can buy a DC charger for about $25,000. 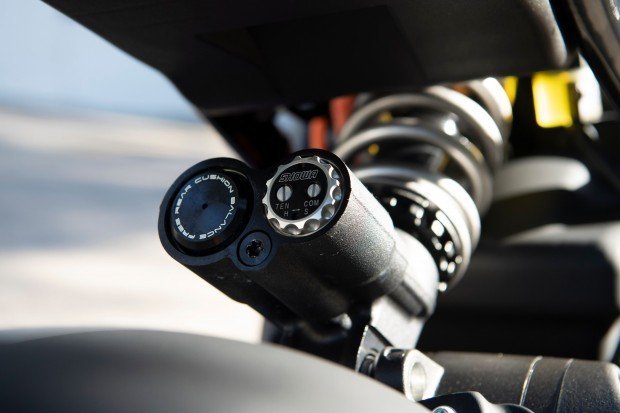 I’m thinking not all the possibilities here were explored.

The issue there is the Livewire does not like constant DC fast-charging, and every third charge or so will require the much slower AC charge.

So as a short-range urban runabout, it’s viable.

But if you use your bike for anything other than commuting or toddling to the nearby beach on Sunday, it’s not for you.

But practicalities aside, how does this short-range electric missile behave when ridden in some type of anger?

It does weigh a very substantial 251kg, despite it being about the size of a 600. And it is kinda long-wheelbased – 2135mm from tip to tip. 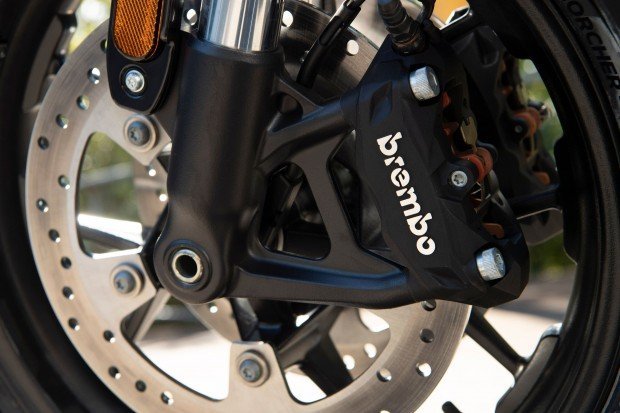 Trusted these and they worked fine.

Well, I cannot say I rode it with any anger. Simply because there was not the opportunity to do so. Harley kept us pretty much at the urban speed limit and there were no contiguous corners to speak of on our route.

But on the few occasions I did give it a wee serve, I felt it oversteering and I felt its weight. It has a quoted lean-angle of 45 degrees, but no-one went anywhere near that. And I was hesitant gassing hard out of the odd corner because the power delivery is instant and those Michelin “Scorcher” tyres were nowhere near any kind of temperature I would trust. 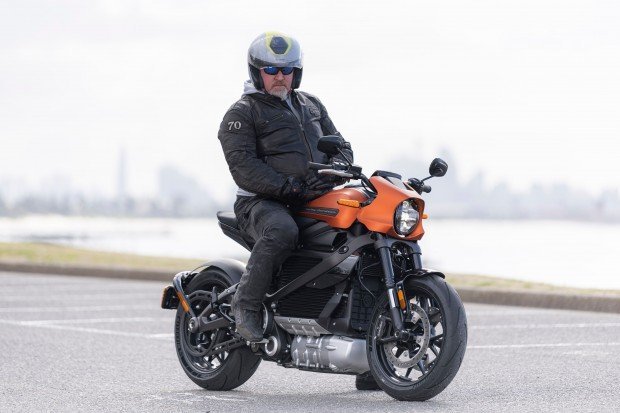 “Hello, ladies. May I fetch you an ethically-sourced avocado-flavoured hessian bag to munch on?”

The techs set the sag on all the bikes and dialled the pre-load up because there are no lightweights in this game. But the Livewire seemed to smash over bumps rather than glide or ride over them – and it did bottom out once or twice on some big ones. I’m thinking much of this could be resolved by getting the suspension properly set up. I refuse to believe Harley would skimp in this area and for that price.

So launching it into a corner requires you to understand it steers relatively slowly for a bike this size and with such a semi-aggro riding position, and some judicious throttle application is needed lest something graceless occurs. The rake is 24.5 degrees, the trail is 108mm, and the fork angle is 24 degrees. It should maybe steer a bit quicker than it does, but I think its weight is a big factor. 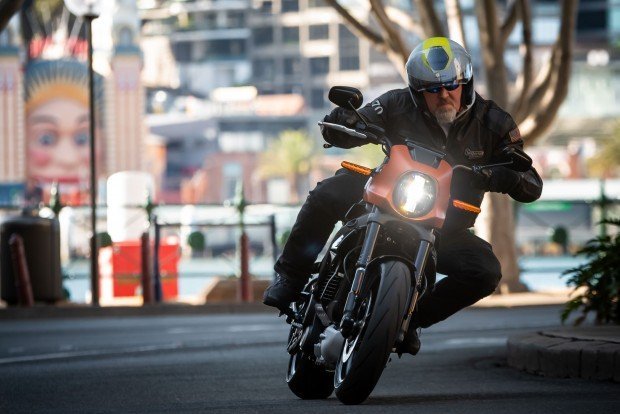 The brakes seemed very decent – Brembo twin radial-mounted, four-piston monoblocs at the front, and a dual piston jobbie on the back – all with floating rotors. Which make the Livewire the best-braked Harley ever made, I reckon.

ALL ABOUT THE MODES

There is a notable difference in Sport mode and say, Range or Rain mode. The oomph is delivered with more verve in Sport.

In the custom modes, you can dial in the engine braking from none to heaps, and set the power delivery to 100 per cent – and get all the verve you want, and therefore drain the battery fairly quickly. Or you can whirr along with gravitas and dignity and get a solid 170km out of your ride. 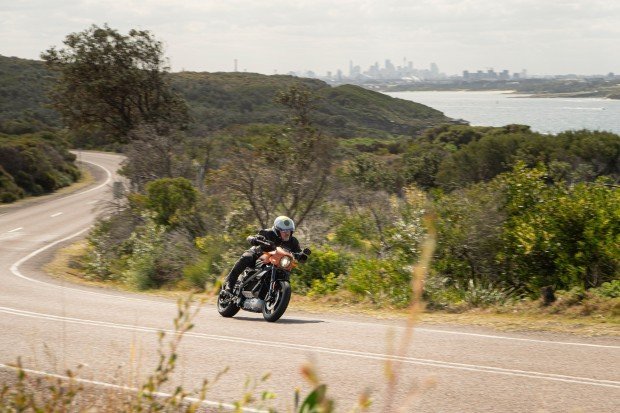 Let’s not get carried away. I’m about 100-metres from the entrance to a car-park.

I know on which side of that coin I live.

Of course it makes no noise other than a turbine-like whine when you’re riding. At idle it is silent, but it does pulse. Harley has used Haptic Pulse technology to overcome the inherent “lifelessness” of EVs. You can feel it, like a slow heartbeat as Harley likes to call it, when you sit on it.

It comes off the lights hard, and it will certainly shame a lot of normal bikes who think they might wanna teach Harley’s electric essay a lesson in drag-racing.

I live for the day someone wheelstands it – though I’m thinking without a clutch, that would not be possible. It’s just too long and too heavy to stand up under the throttle alone. 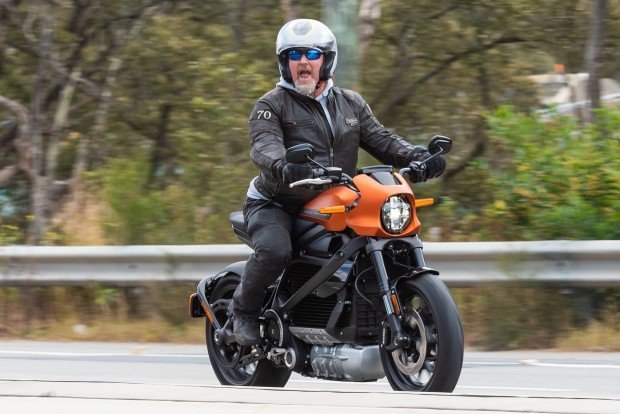 At the end of the day, I was left feeling a little discomfited.
It was better than I had expected and rather suitable for its intended urban purpose. And it sure did bang in a straight line.

But it was also rather less than I had hoped for in terms of rideability and handling, and I am at a loss to justify that stellar price tag. Sure, it’s got some decent tech on it, but nowhere near enough in my view for that asking price.

An object is only worth as much as someone is willing to pay for it.

I did ask Harley how many it had sold.

It was a question Harley did not feel disposed to discuss. However, it did say it was receiving a lot of positive pre-sale interest.

I also asked Harley if it had factored in that battery technology would improve very quickly in the coming years, and if something better – ie. faster charging and a longer range did become available at some time in its five-year warranty period, could that advance be engineered or fitted into the current Livewire iteration.

I was told no. So what you buy is what you ride for the next five years. 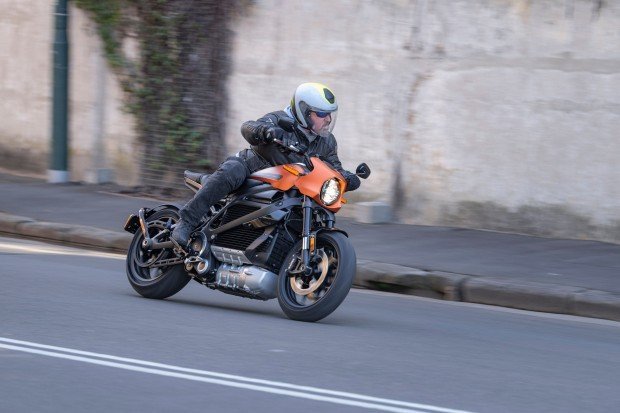 The whirring noise failed to echo off the walls.

The Livewire will not “save” Harley if you’re of the view Harley needs saving. I cannot see it selling tens of thousands of Livewires – and certainly not in Australia, where distance and the lack of charging facilities will rule motorcycle purchase choices for a while yet.

But what it will do is open an avenue for Milwaukee to more fully embrace electric vehicle technology. It may well offer a smaller and cheaper version of the Livewire in the near future, and its commitment to this New Age tech seems strong.

It has created a very objectively handsome bike. The Livewire is only ugly to the traditional Harley buyer, and they’re getting thin on the ground these days.

And to be honest, they’re better off staying away from it. It goes way too fast for them.

Harley hopes the Livewire will be embraced by cashed-up urbans, who have tired of virtue-signalling their Green credentials on social media, and have put their money where their mouths are.

I wish Milwaukee every success in this. 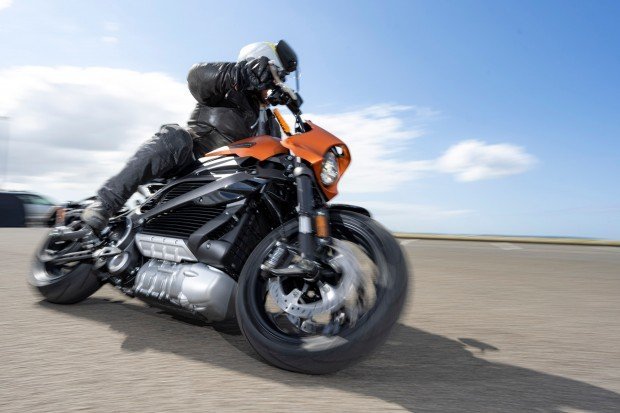 ALL THE SPECS CAN BE VIEWED HERE

Harley-Davidson gifted me and each attendee at the launch with a portable Smartphone charger emblazoned with the Livewire monker.