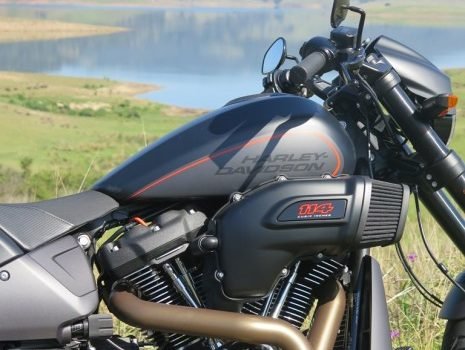 This is the best Harley-Davidson ever built.

There. I said it.

You can either believe me, or you can go and ride one and then you can believe. Or not.
I’m not fussed because the statement is true – both objectively and subjectively. 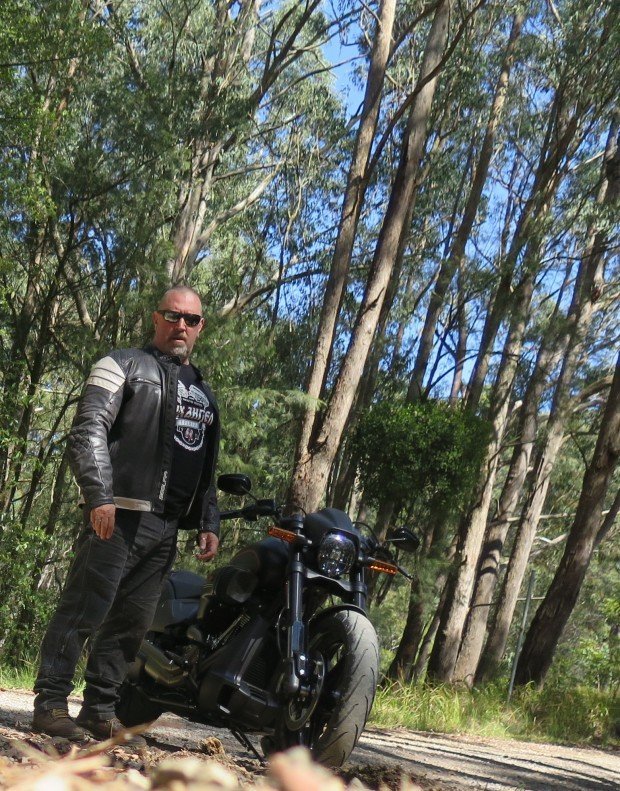 I like forests. You can hide things in them.

I’ve ridden Knuckles and Pans. I’ve ridden Wallas and ULHs. I’ve ridden customised monsters with 21-inch-over front-ends, and I’ve ridden evil stroked Shovelheads with 24-inch apehangers on six-inch risers. I’ve ridden VRODS, Super Glides, Ultra Glides, Electra Glides, CVOs, the Destroyer, and even a few of those hateful AMF-era nightmares. And I can tell you with my hand on my heart this is the best Harley Harley has ever built, bar none.

This has made my heart glad. 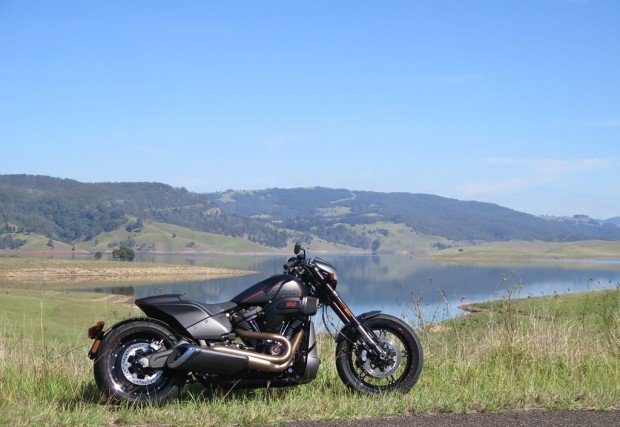 Note how the paint swallows the sunlight. 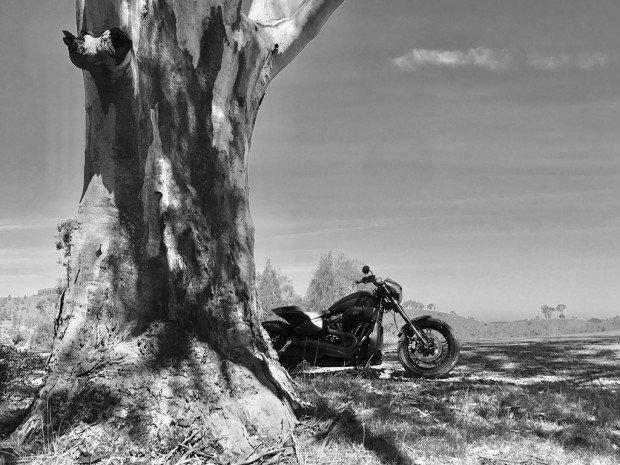 See? All the sunlight has been swallowed.

I am an unapologetic fan of the marque. I have ridden more and varied Harley-Davidsons than most people, and I have never paid any attention to the largely inchoate reviews the motorcycle media offers up in its vain efforts to critique something beyond its limited ken.

Expecting sportsbike riders or adventure riders or former racers to “get” Harleys is like asking me to get calculus. I don’t, I won’t, and there’s not even any point in trying.

You can look up the context-free specs of the FXDR for yourself. But they are meaningless numbers devoid of any soul. 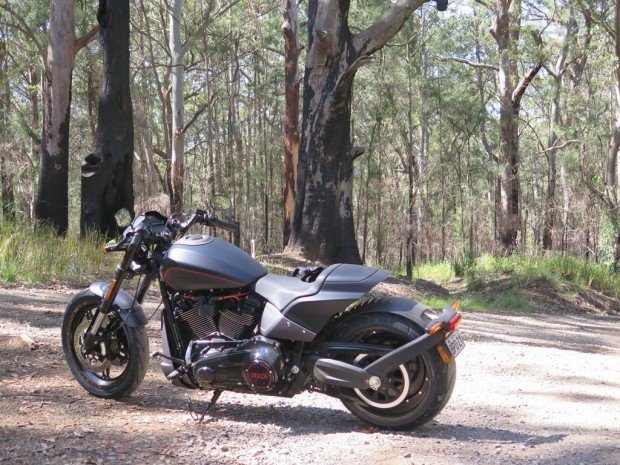 Of course that tyre-hugging rear-guard and its attendant support arm can be removed. Just don’t forget to install a rear tailight and blinkers so the cops leave you alone.

Creatures like me, on the other hand…well, we’re more like Spaniards who understand and appreciate bullfighting while the rest of the world hates on us.

But we don’t care that the rest of the world doesn’t get it. We get it. Because killing bulls, like riding Harleys, ain’t for everyone – and that’s just fine. You either get Harleys and love them, or you don’t and think they’re rubbish. And that’s fine too. It’s not compulsory to buy one, you know.

But allow me to unpack some more of this bag. 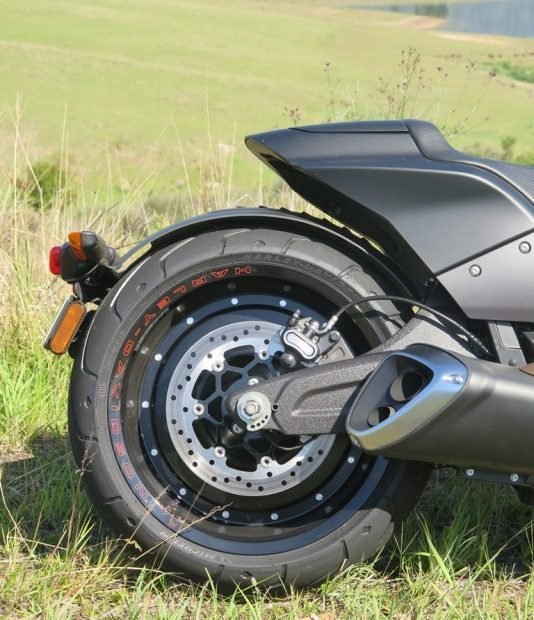 I did work hard at that final centimetre of chicken-strip. But a 240 tyre is what it is.

In the last decade or so, Harley’s previously unshakeable halo of insurmountable cool has slipped a little. It has gone from being seen as the iconic choice of the feral outlaw to something doddering old people tool about on while getting in the way of traffic.

This is a problem for Harley-Davidson and its declining sales reflect this. 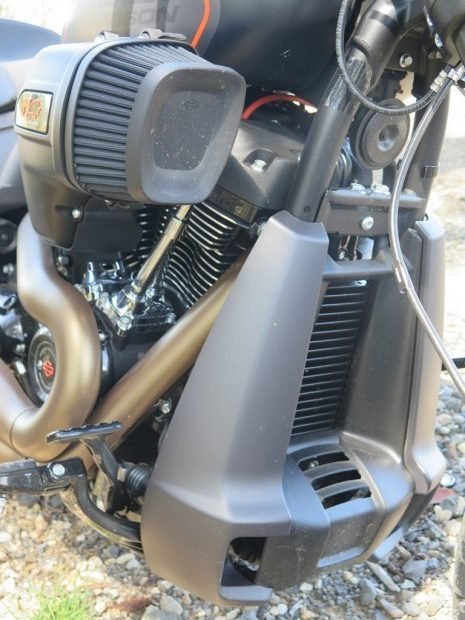 I did not like these plastic additions in the pictures. They work quite well in actuality. And that air filter is a statement of pure glory.

But Harley would not be Harley if it just surrendered to market forces and a changing perception of cool.

And it hasn’t and it won’t. And the FXDR is but the first shot in what I trust will be a barrage.

So why is it the best Harley ever built? 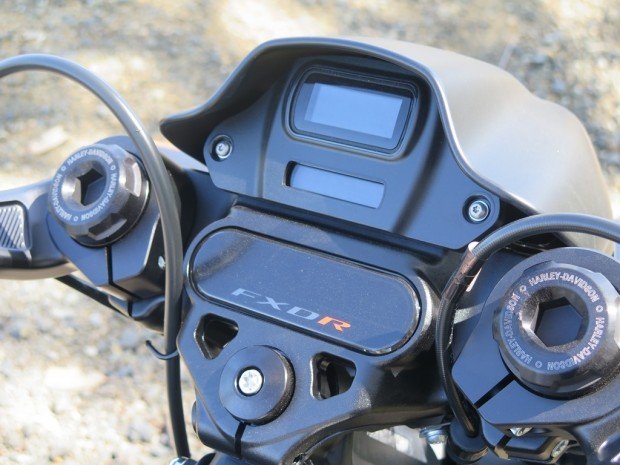 I did one corner on the Putty Road that felt so good the bitumen almost tore off my leg and chucked it into one of those unforgiving sandstone walls. I limped for a week, and remain amazed to this day at just how hard the FXDR can corner. You will see lean angles on this that will juice your he-lemons.

The leg-tearing-off thing was entirely my fault, of course. I’d been pushing the FXDR harder and harder and faster and faster up the Putty and wondering just when I was going to hear that familiar and satisfying grinding noise that always tells you you’ve reached PGC (Peak Ground Clearance). I was in the Zone, as it were. And because I was in the Zone, I failed to appreciate just how fast I was going around corners with my stupid feet facing forward. 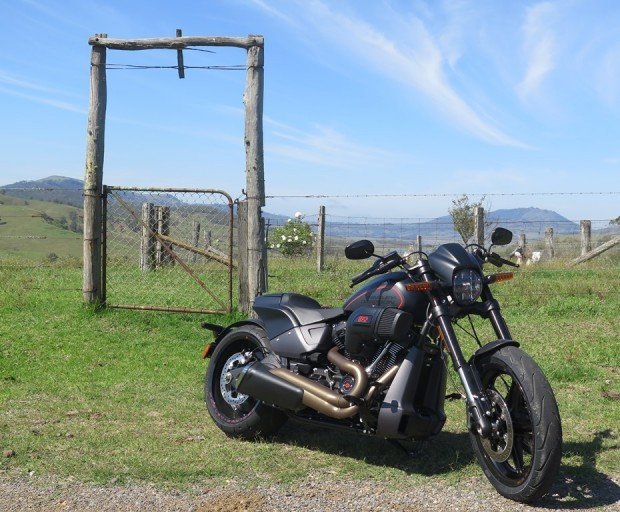 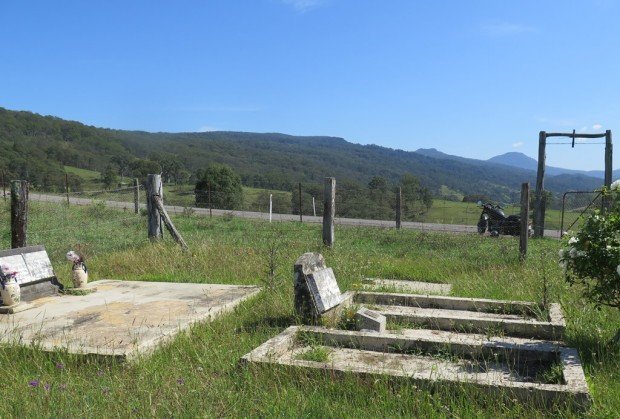 Those at rest had a view in both directions for what it was worth.

And then I did.

My bootheel touched down and then it dug in. I was mid-corner and there was no backing out. The laws of physics in terms of friction coefficients applied themselves very suddenly and my foot was ripped off the forward-mounted controls and flung…well, kinda up, back, and sideways. It was all very thrilling and violent, and things almost went “Ptang!” just to the inside of my girl-pleasing vegetables. I had to pull over soon after to see if my leg still worked.

So my fault entirely. I had not counted on finally finding PGC. The FXDR has such outrageous lean-angles (32-degrees odd) for a Harley, I could hardly be condemned for this oversight. But there you have it. 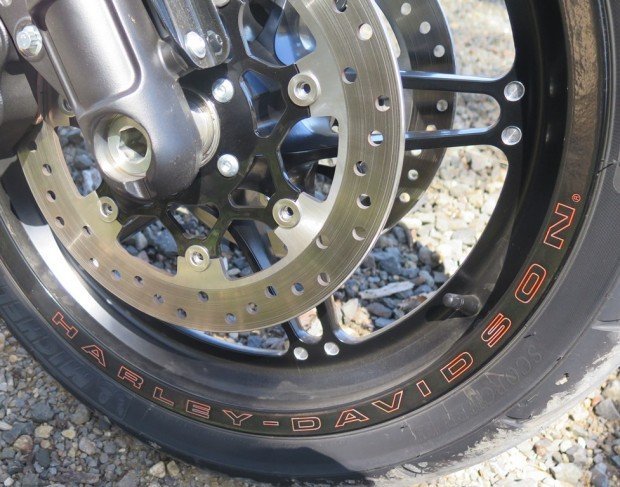 Lest those changing your tyres be in any doubt as to what marque they are working on.

Anyway, that was a lesson learned. Mind your feet when you’re pushing on.

The FXDR as a whole?

Hell, I loved it – not the least for the way it went around corners. “At last, at last, at last” I kept muttering to myself as I wound it through bend after bend.

I also thought it looked sensational – a satisfying mix of modern techno-sass and traditional Yank ironmongery. I felt it to be an excellent stylistic replacement for the somewhat lamented VROD. 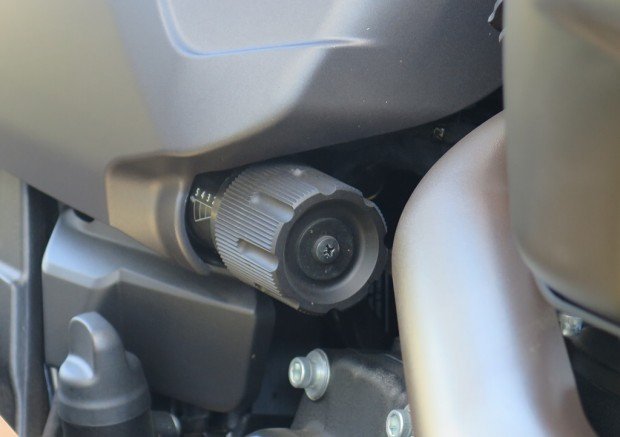 The pre-load on the rear is easily adjustable. Mine was on 2. It worked just fine.

It’s got that same fat-arse 240 rear hoop and that same low silhouette. It also folds you in half in the middle like a penknife, so big distances and long days will be a chore, but Mama didn’t raise no whiner, did she?

It’s actually a bit of a blank canvas aesthetically – as all proper Harleys should be. There is much that can be done with it, but the foundation is solid.

That killer 114-cube Milwaukee Eight donk, the improved-outta-sight gearbox, the revised position for the shock, the 4kg-lighter aluminium swingarm, the USD front forks – it’s all there, and it behaves accordingly. It will surprise and delight you in that regard. 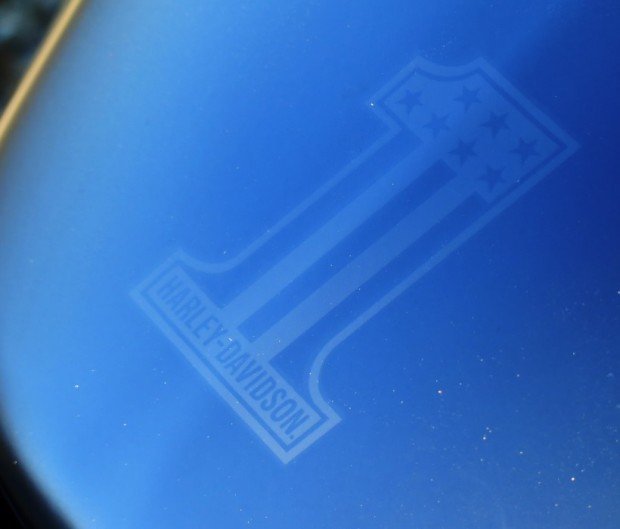 I love these little styling touches – a ghosted-into-the-paint Number One.

Dive under brakes is minimal because it’s a long bike (2425mm) and it has a somewhat saucy rake (34-degrees) to the front-end. Sure the twin discs are welcome, but brakes are still a frontier Harley needs to address – especially on a 300kg-wet beast like this. They remain a firm pull, though feel has been improved. They work, but they could work better.

The clutch is relatively light, and the ABS did deploy itself a few times because I was probably too enamoured of how well it went into corners and got a bit ahead of myself. 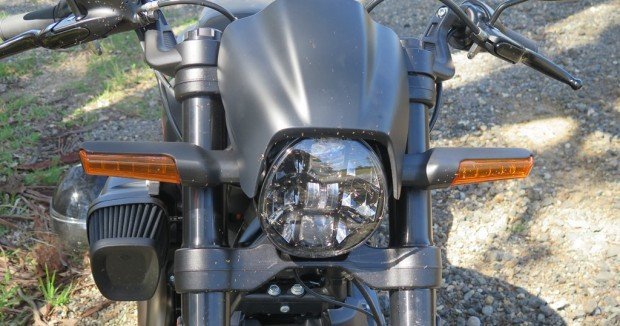 The headlight is good. The bugs, not so much.

You’ll get 200-odd out of the 16l fuel tank and you’ll heave that hideous muffler into the bin before it even leaves the shop. But if you decide to leave it on, it doesn’t sound half bad.

You can’t tie anything to it, which bothered me some. Like would it kill Milwaukee to maybe get those rear bolts on the rear guard to stick out some? You know, for ocky straps. Wearing backpacks on Harleys really kills the vibe.

Still, top marks for the great headlight and a superb overall finish. I’m liking the matte paint, though I’m sure I don’t like it much in that creamy white colour. The grey and greyer scheme is the go for mine. 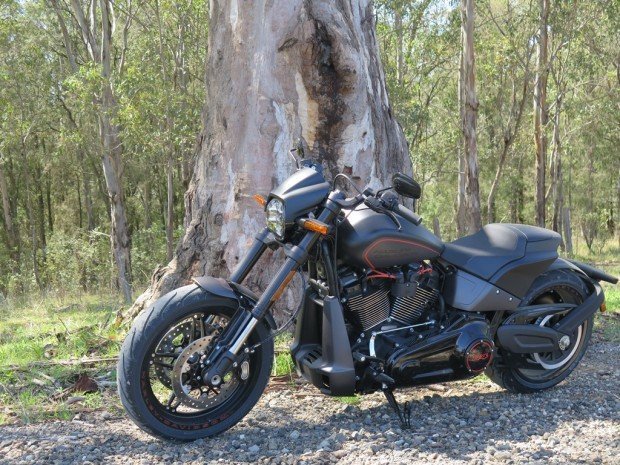 At a time when Milwaukee is facing an unprecedented downturn in sales, the FXDR is a huge step in a direction the company needs to take.

The gleaming parade-sleds are all well and good for its now dwindling traditional market of slow-riding pensioners, but that is, as I’ve noted, a dwindling market.

Outlaws are still riding them hard and fast – but with the coming of the Police State, you don’t see them out much anymore.

That right there is the problem.

Where once the outlaw persona sold Harleys to wild young blokes who craved a touch of that loud and dangerous glamour, the default poster boys for Harley are now wobbling oldies – and there is nothing cool about that. 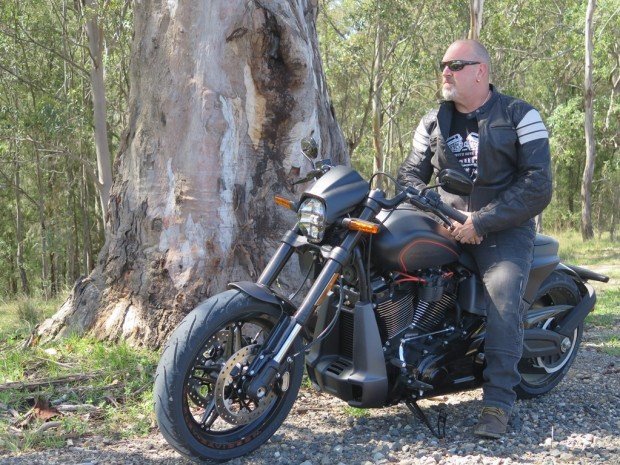 Those self-timer shots always look lame. And then the camera falls off the rock you balanced it on and into the dirt.

But this FXDR is hell cool. It has soul. It is righteous. It will not appeal to the ancient wobblers precisely because it corners like a mad bastard and makes a few small demands on you ergonomically. The old and infirm need not apply. This is a Harley that goes around corners like no Harley ever has. Yes, you have to incentivise that fat rear-tyre into the initial lean, but soft-handed and kind-hearted bearded she-men should never be riding these things anyway.

It’s also the Harley that Harley had to build at this time.

And it’s the best Harley ever made.

My usual photographer, Nick Edards was not available when the bike was in my hands. So I took the images. That’s why there are none of me riding it. More’s the pity since your missus will now have to use her imagination. Of course, should Harley see its way clear to let me have an FXDR for another session, I’ll make sure Nick is on hand rather than galivanting around some tropical island with his girl.

For more info and all the specs, look HERE.