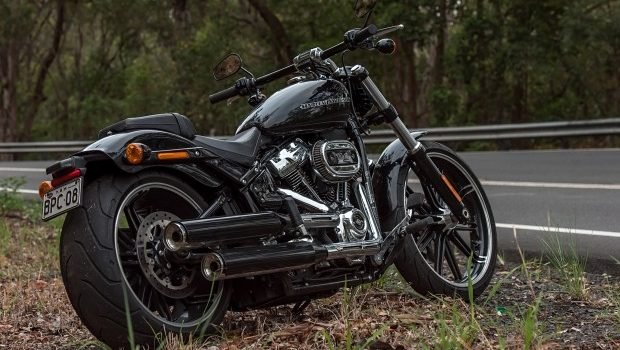 How’s the chorus of that old fiddle classic The Devil Went Down To Georgia go again?

Fire on the Mountain, run, boys, run
The Devil´s in the House of the Rising Sun

Yeah, that’s it. I figure if ol’ Lucifer was heading down to Georgia to visit a legendary knockshop, he’d be riding this Breakout.

Not any other Breakout. This one right here.

The 2018 model with the fire-starting 114-cubic-inch engine, the rich sin-dark paint, the impossibly fat-beaut rear hoop, and an evil new headlight that works as purposefully as it looks.

This Breakout is, as far as I am concerned, everything a Harley-Davidson needs to be, has not been, and now is. 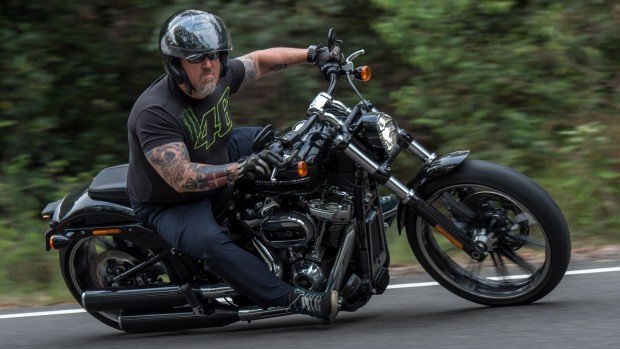 I am wearing a Rossi T-shirt to avoid the attention of Task Force Raptor.

It handles very well in relative terms. That sexy fat hoop needs to be coaxed to tip in, but once you’re leaned over Harley’s all-new suspension makes sure you stay on the line you picked. Older Harley fans will know that was never the case before. Bumps are now properly dealt with rather than terrors to be avoided.

It goes…oh my shiny cloven hooves, it SO goes. The 114-cubic-inch (1870cc) engine shovels torque at you like a backhoe digging drainage channels in a flood. It’s a shade tardier than the 107-cuber to punch you in spine (I addressed this in my Fat Boy review HERE), but it more than makes up for it in the way it cruises at 140-plus…and indeed in the way it surges past the old ton.

It’s smooth, it’s responsive and it’s fuelled so damn well you’d think there were actual cables and carbies on it. 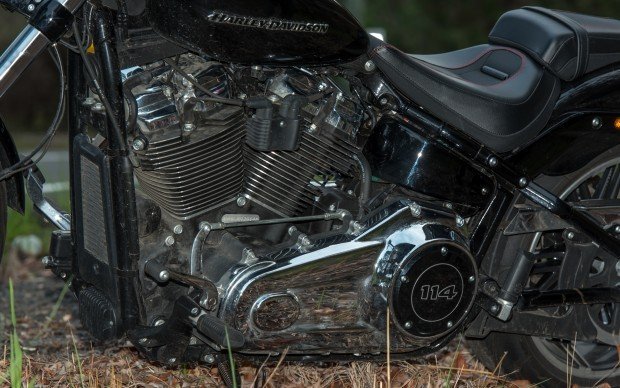 Four plugs, lots of cubes, all now being coaxed on by 2018 technology. The difference from last year’s models is huge.

Where the Hell was this Breakout when I was trying to evade the police back in the day? Talk about making me work for it…

Now where was I? Oh yes. I was telling you how the 2018 Breakout is now everything a Harley needs to be.

So it bangs and it’s suspension works.

You’d think that was enough, huh?

The gearbox is slick and sure. Gone is the door-slamming bang that informed your entry into first gear. From first to sixth, the progression is more positive than a Nimbin Yoga class. 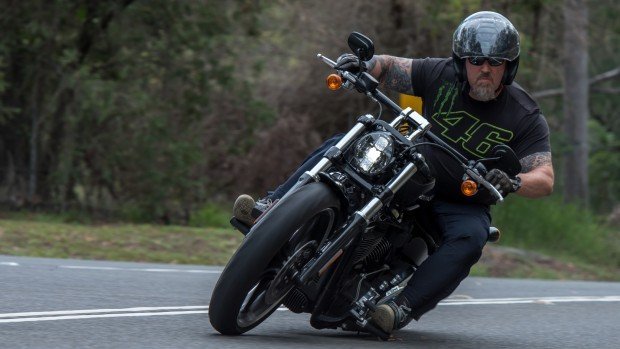 Namaste to you all.

The whole package is, from an engineering standpoint, a massive step forward for Milwaukee.

But as far as the Breakout is concerned, there’s more to it.

There’s a tone to this bike. A feel…a vibe, if you will.

It pushes my old outlaw buttons like no other Harley has since the glorious bad old days.

It’s a combination of stance – long, low and mechanically mean. No other bike twitches up my bad-man ganglions quite like this one in terms of aesthetics. That mad-fat rear tyre only helps me walk further down that dark road. 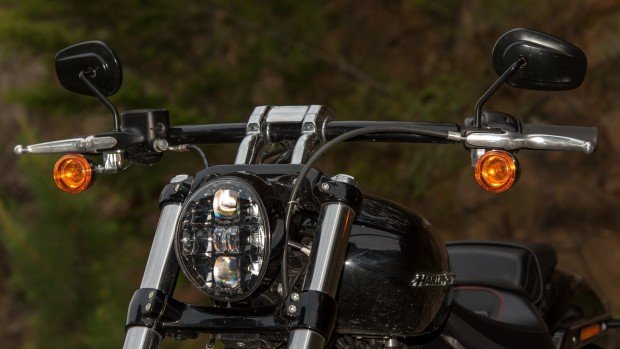 I love that headlight. It works. It looks mean. I can ask for nothing more. 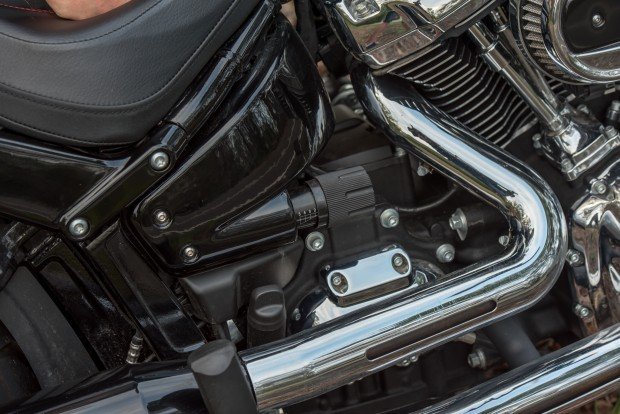 Dial-up your preload. Mine was set to “Hefty”.

If you’re maybe looking for something to replace your ageing VROD that is possessed of at least as much sass, then I think the Breakout is right there.

The riding position is reminiscent of the VROD, and has the same long-distance, long-hours issues, ie. You’re going to know you’ve been for a long ride.

The Breakout is certainly more ergonomically comfortable that the VROD, but you are locked into a feet-and-arms forward position and the meat on your arse is your secondary shock absorber. Happily, Harley’s 2018 suspension is so much better than what went before, this isn’t as onerous as it sounds. You can certainly do the miles on the Breakout, but you will feel yourself wishing there were more Houses of the Rising Sun dotted along your way. 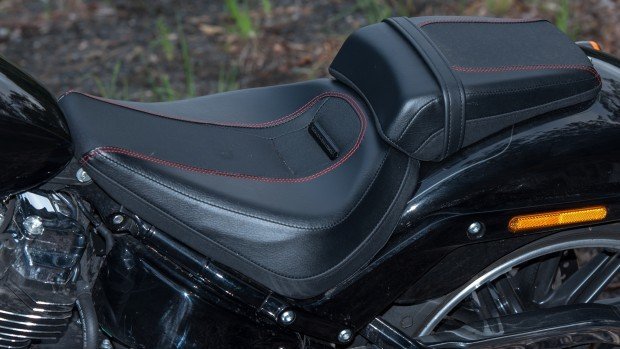 The seat is a masterpiece of upholstery. It’s gorgeous and very up-market. Choose a small, fit pillion. Trust me on this.

I found the ground clearance adequate, and I was able to push on quite a bit harder than people imagine. Especially people who have never ridden one of these 2018 Harleys.

I’m not a fan of the stock tyres, especially in the wet, and they would be the first things to go if I bought a Breakout. That tread-pattern might be as aggressive as a nightclub bouncer, but toss some water at it and it just goes inside and sits down. This is no biggie. I’m just letting you know in case you take your new Harley out in the rain. There are no engine maps to assist you. It’s your throttle hand that will land you in poo or take you out of it. I like that in a bike. You may not. Change the tyres. 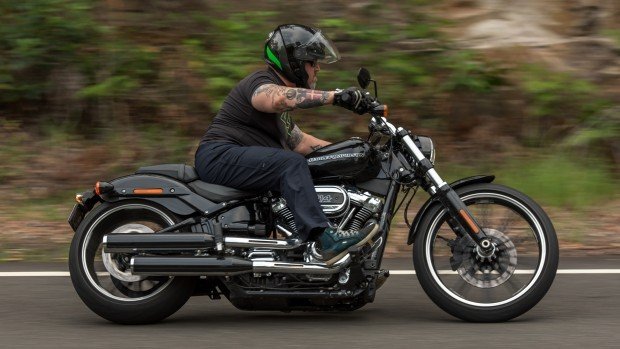 I very much liked the minimisation of chrome. Evil is hard when you’re all sparkly. 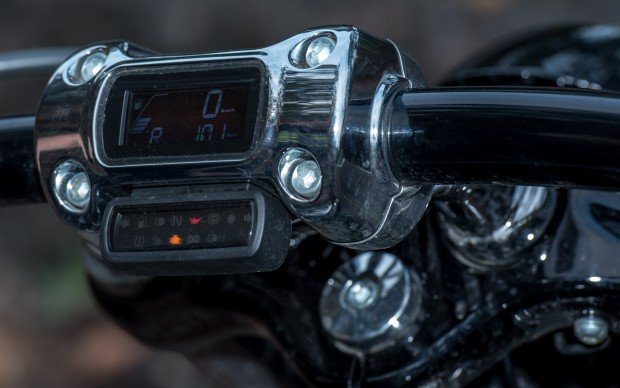 And speaking of riding in the rain, try to avoid it if you’re not a fan of having a sizeable geyser of water hitting you in the face. The position of the front guard does pretty much nothing to stop water being flung off the tyre and into your face. I found it refreshing and bracing. You might be a bitch about it.

The sidestand was the worst thing on the bike. Harley used to have glorious side-stands; long bastards with a sort of locking mechanism that stopped the bikes rolling off the side-stands. Not no more. This new one is short and hard to deploy fully. I predict a lot of them will roll of this new side-stand.

Oh, and you still can’t ride it in shorts. Your left leg will touch the hot primary if you put both legs down at the lights. You will only do this once, but.

I thought the instrument cluster was an act of design genius. It sits on top of the handlebar clamp. It’s small, as is its LCD read-out, but still relatively easy to see. It’s just such a neat solution on a bike you don’t spend a lot of time looking at the instruments on anyway. Trust me. You don’t need a tacho to let you know when to change gears on an H-D. And if you don’t know what gear you’re in, maybe this motorcycle stuff isn’t for you.

Around town the Breakout is all evil, wicked, mean and nasty. Just as it should be. Just as it was always meant to be.

I started checking myself out in shop windows a lot. I remembered to look as menacing as possible. I reminded myself not to ride into the car stopped in front of me. That would have ruined the whole effect of the Breakout.

And I think that’s what it is. The effect. 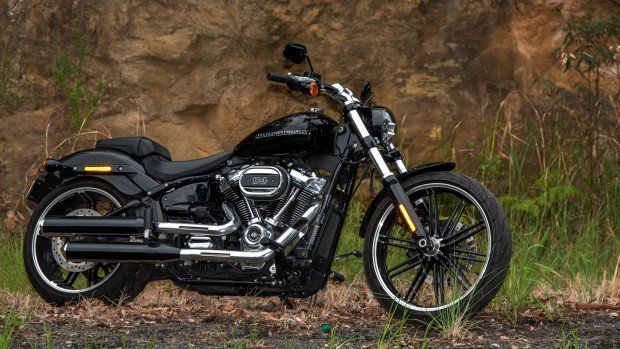 “Take me to party with strippers. I’m not even kidding.”

That’s what makes the Breakout so desirable. It will transcend what you are, and make you seem like what you’re not but might secretly like to be.

If, like me, you’re a once-was, then the Breakout will push all those horrible old buttons and make you long for what was and can never be again. Which is right and proper, but it’s ever so nice to reminisce about it behind those fine wide ’bars.

I think because of all this, the Breakout is most certainly the stone-cold coolest of all the current Harleys.

It’s the one Harley that is, at least to my eye, not at all shy about its outlaw heritage. 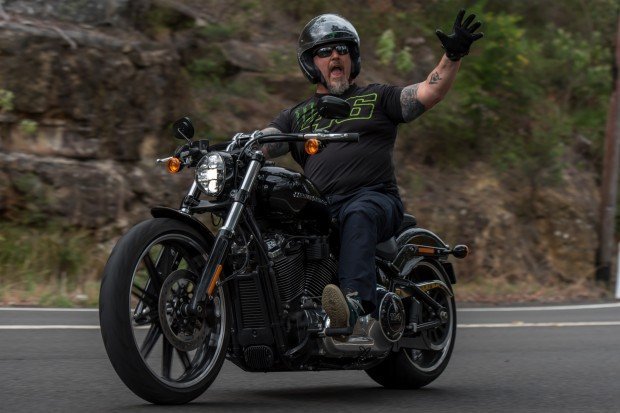 “Why are you throwing that camera bag at me!?”

It’s modern enough to satisfy even the most anti-Harley advocate – and make no mistake, good suspension, a lighter and stiffer chassis, decent brakes, a myriad of little styling and engineering tweaks, and a kick-arse engine will convert a lot of them if they take one for a ride.

But despite this most welcome and very 2018 feel to the Breakout, it’s the bike’s look that really does it for me.

I feel like a bad-arse riding it. I’m not. But I feel like I am. And that is no small thing.

But I think maybe Harley should change the name. Breakout sounds a bit too soft for a motorcycle as visually and splendidly nasty as this one. Is Iron Panther taken?

Thunder on, Milwaukee. I like what you’re putting down in 2018.