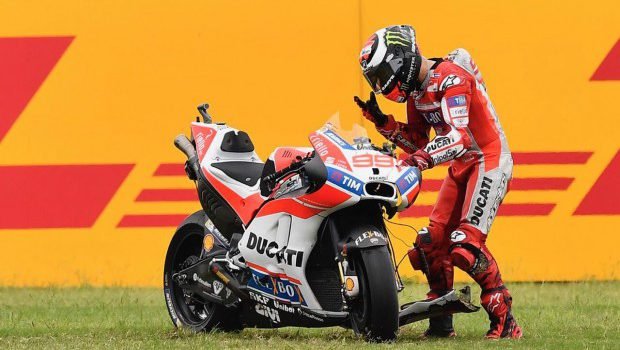 “You are in 18th place and on the same number of points as Tito Rabat, which is five.”

Get away from the fucken motorhome. I’m not in the wheel-well anymore.

I have, in fact, been flown to Germany to meet with Matthias, and am now sitting outside his office until he is ready to swear at me about the expensive motorcycles you are throwing at people.

I may sit here for some time, according to his secretary.

But that’s alright. I have all these great pictures of you to go through. But this one of you calling Matthias’s bike “The filthy puta son of a diseased puta’s stupid puta!” is by far my favourite.

Because it’s the bike’s fault you fell off, yes?

Yes, it’s that video of you throwing Matthias’s multi-million dollar Ducati on the ground, immediately after you first threw it at Iannone, then onto the track, then into the gravel and then onto the grass.

Did it really need to be heaved to the ground again? Could you not have thrown it on the damaged side? How many spare fairings do you think we fucken have?

That aside, what the fuck are you doing shunting Iannone? If you’re going to spear him with Matthias’s bike, then make sure you take him the fuck out so I at least have something to tell Mathias he will understand.

In fact, what the fucking fuckity fuck fuck are you doing in general? Can’t ride out of Q1? Sixteenth on the grid?

George, I have to tell you, your position on the championship ladder after two races is tragic. You are in 18th place and on the same number of points as Tito Rabat, which is five.

If I put anymore telemetry on the bike it will pop like a pus-filled zit. We are at Peak Telemetry, George.

You know what Mathias is going to say? He’s going to say: “What have I bought, Gigi? Tell me. What is it I have bought here? Because while I know what I could have bought, I want you to tell me what it is I actually bought. I could have bought Tito, his parents, his village, the mountains behind it, the sky above them, and every goat for 100 kilometres in every direction for one-tenth of what I have paid for George.”

I hope that’s all he says.

We shall talk soon. In Texas. If I make it out Germany alive.