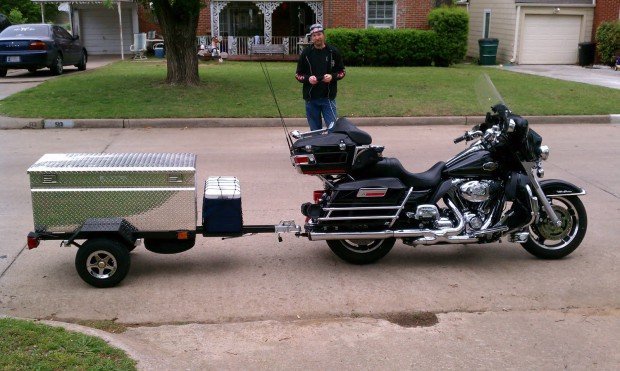 Yes, now you can take all the butt-plugs you’ve ever wanted.

Here’s what I’m not getting. Motorcycles pulling trailers. I didn’t get it when I first saw it many years ago, and I do not get it now. I don’t see it often, but from time to time, I come across some bloke hauling a trailer behind his motorcycle.

Naturally, I spend as little time as possible behind these mobile chicanes when I encounter them, for I am overcome with visions of catastrophic disaster.

What the bastard hell is going on here, people?

What are you doing that requires you to tow a metric tonne of shit behind your bike?
Camping? Piss off. I’ve been camping. Everything any bloke needs to take camping is easily strapped to the back of a bike. Going camping with a pillion? Same deal. Maybe add some hard luggage if she’s taking all of her face-creams and hair products.

What could you possibly require that would cause you to affix a trailer to the back of your motorcycle? What’s wrong with you?

It’s a motorcycle. Surely the whole point of a motorcycle is the cornering-and-acceleration paradigm, is it not? You know, swooping into corners, powering out of them, repeat ad infinitum.

Yes, I understand that motorcycle trailer design has come a long way in the last few decades. Some grey-bearded, liver-pill-filled dodderer tried to regale me with the technical marvels of his Harley-trailer-combo when he caught me looking at it at a rest stop on Thunderbolt’s Way a while back.

“Stop talking to me,” I said to him as he launched into an inane diatribe about trailer-life. “If you need to carry around that much shit when you go riding, then it’s time to buy a car and flush your motorcycling credentials down the nearest shitter.”

“No more talking to me,” I said firmly.

Hauling a trailer around behind a bike has surely got to be the stupidest thing a man can do. It’s right up there with bolting a sidecar onto your bike, or buying one of those high-powered, three-wheeled mobility scooters made by Spyder, and pretending you’re still a motorcyclist.

Certainly, there are arguments for the riding of three-wheelers that can be made for the lame and the infirm who crave handlebars but lack functioning legs. We’ll have that argument another time.

Right now, I am struggling to understand what possesses a man to hitch a trailer to his bike and go riding.

If it was because he’d swilled his weight in beer and there was some kind of wager on the table, then I get that. I’ve done lots of stupid shit for a bet when I’ve been drunk.

There can be no other reason.

I’ve spent weeks on the road. With pillions. I’ve slept in table drains and under bridges. Everything I (or we) ever needed was tied to my bike. I never once leaned back against a tree, looked into the campfire and thought: “Gee, I wish I’d brought a 20kg gas cylinder, a three-burner barbecue, a canvas awning, four chairs, a card table, a chainsaw, a shower, a compressor, a tyre-changing machine, a 80-litre esky and a nice rug on my motorcycle journey. Maybe I’ll get a trailer so I can do that next time.”

Is it great to have such things on a camping trip? Sure.

Is it worth compromising the ride to have such things?

No. Not ever. Not on this planet and not on any other planet.

If you are unable to enjoy yourself in the wild without the aid of all that shit you feel you need to tow behind your bike, then there’s something tragically wrong with you. As a motorcyclist, I mean. You’re probably a really good person, who is nice to animals and gives to charities. But you’re no longer a motorcyclist. You’ve bolted a trailer to the back of your bike and rendered it an “un-bike”. Why don’t you just toss all that shit into a car instead? Spare yourself the soul-draining horror of idling along at a relative snail’s pace, wondering if the next corner is going to see you jack-knifing your shit into the trees.

You do this trailer stuff because you get off on the fear? You get a rush from rendering a perfectly-balanced two-wheeled weapon into something that handles like a sea-chest falling out of a tree, don’t you?

Okay, then. That, I can understand. I have friends like you. They amuse and terrify me in equal measure.

The trailer thing is a challenge. It’s like eating a handful of cinnamon powder, or disconnecting your brakes and doing a lap of Phillip Island.
Respect.

If that’s what it’s about, more power to you.

If that’s not what it’s about, kill yourself. You’re a disgrace to the entire concept of motorcycling.