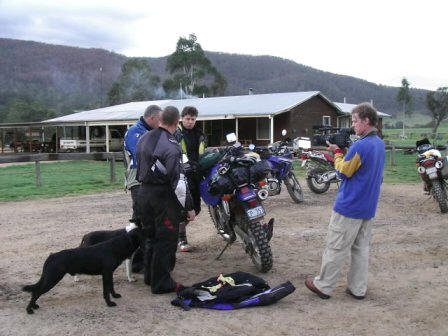 Up around 0430, dress, grab some cereal and coffee. Miles wants us to go to Tom Groggin Station and warn them that we are coming and make sure we can get the chopper down there.

The Rover is a little rough, but appears to have improved heaps. We get there. We stop on a small concrete bridge on the way in and watch the trout rising in the stream. A big sign in front says “NO FISHING, NO SHOOTING”. 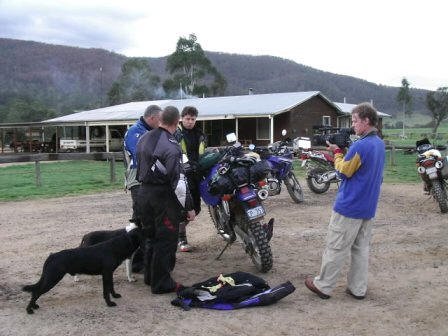 We find the manager and brief him. He’s a nice guy. He talks about his kids. His daughter is the state motocross champion. His son can ride the wheels off just about anything.

I chat. “Lovely little creek you’ve got out the front. What’s it called?”

Bikes arrive, followed by chopper. Bikes head off to Mount Pinabar, Dino points the Rover over the southern ridge towards Omeo. 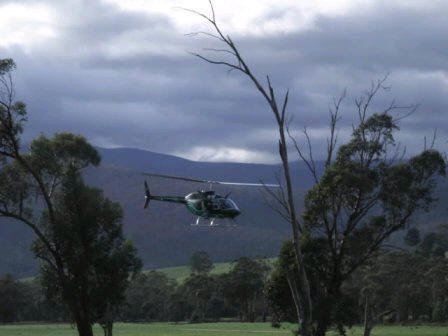 We get a message from the chopper on the UHF. Pinabar is shrouded in cloud, Andrew is freezing his tits off, can they have their door back?

We stop a kilometre up the road at a flat spot on a summit. We take the co-ordinates and try to radio the chopper. The radio keeps dropping out: it only works “line of sight” and Roger isn’t often in sight. We decide that we need to make smoke. We take some petrol from the KTM and pour it on some green waste. Dino notices that some of the trees are a bit high, so he gets an axe out of the back of his car and starts cutting them down.

Finally, we get a message that we should head on and Roger will catch up later. We head for Omeo. 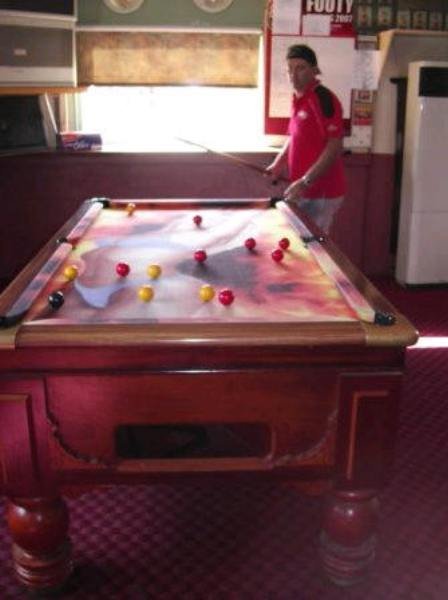 The road is very challenging, covered in round loose gravel much of the way. We come around one corner, and there are three small trees down on the road. Land Rover swerves violently, clips a few branches off the first, fishtails, KTM on trailer executes passing manoeuvre, Land Rover recovers in time to clip a few off the second, KTM on trailer re-tries passing manoeuvre on other side, Land Rover straightens up in time to clip third tree.

We get out. The trees have scratched a bit of dirt off the Rover, but it appears OK. The first tree has a broken branch in a perfect spear shape at chest height pointing at the corner.

We break the branches and get the trees off the road.

The road opens up to a good logging track. We get to Omeo, where we should have stayed last night. We ask at the servo where we can put a chopper down. The guy there suggests the football ground because it’s got the Treetop Hotel next to it, which has “HOTEL” painted on the roof in large letters. We think this is a fabulous idea.

We get a call from Ian. Boris’s DR650 has fried its clutch on Mt Pinabar. Others are coming, they are trying to repair the DR, either Boris will ride it out or we will have to go back and get it.

Twinkles is next to the servo. It’s a café that sells ten dollar hamburgers and has one of those homo rainbow flags on each side of the front door. We go inside, grab a ten dollar hamburger, and discuss the situation. Dino thinks he can talk the guys through a clutch repair without an oil change if they have emery paper and some washers, but there’s no way we can get through to them.

We go up to the football ground. There’s an old lady inside doing something. We yell and she comes out. We ask if we can put a chopper down on the oval. “I don’t see why not”, she says. “They put the Air Ambulance down on it last week. And there’s no game on today.” 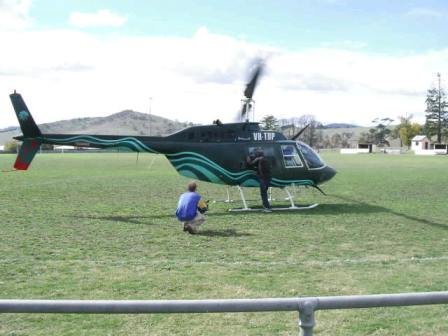 They take their footy seriously in Omeo.

We repair to the pub. The pool table has a pretty girl in a bikini painted life size on the baize. Dino talks one of the locals into a game so he can stroke her. I shout drinks. We chat to the locals. Stevie shouts drinks.

We hear the chopper. We grab cameras, run across the road to the football ground. Chopper lands, Son of Elvis alights looking very cold indeed, Dino delivers door, agrees to surrender it on one condition. Dino has never ridden in a chopper before.

Back to the pub. Dino shouts, talks of need for Gatling gun. Bike comes past. We leave on the run: it’s one of ours. We get to the servo. Miles is there, Mick is there. Latest: Suzuki is rideable after Ian backed off clutch adjustment (!) clutch is fried after having been adjusted too tight from new. 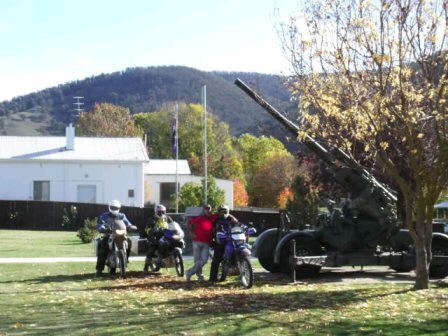 Boris and Ian arrive shortly afterwards. We walk the twenty paces to Twinkles and order more ten dollar hamburgers. Dino takes the Transalp for a test run. He comes back hating it, complains of no torque: “slow road bike with dirt tyres”.

There’s a war memorial next to Twinkles. Korean, with captured howitzer. We get the Supreme Riding Soviet to pose for pictures.

Boris thinks the DR will make Phillip Island. We leave. The Rover is going well now: must have been a batch of bad diesel. This time we make sure Boris is in front. We want to make sure we catch him if he loses his clutch, we tell him it’s because we don’t want ‘roos denting the Land Rover. Excellent roads bordered by trouty looking rivers. One stop for coffee, Ian splits for his home, check the GPS: looks like PI at about 20:00.

We pass a couple of the Brackistan speed camera franchisees, oncoming drivers warn us. We get to about 130km out. We find Boris riding in the breakdown lane, blinker on. We approach, he doesn’t wave, we pass. It’s dark. Dino says he must want us to do roo clearing. 2km on my mobile rings. Boris: “Thanks for stopping, bastards, the clutch is fried.” 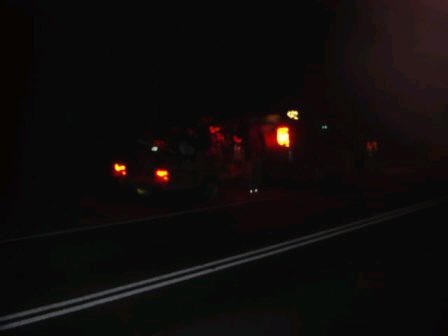 DR gets trailered. The bastards never break down in the daytime.

It’s dangerous to turn. We call back, he reckons he can ride it 2km.

He can, but it takes a while. We strap the DR on the trailer, make room for Boris, move on.

PI coming up. Boris wants to come into town on a bike. We call Mick, he’s arrived at the motel, is all alone. We tell him we will be there in ten, have a camera ready. Plan is to stop one minute before, get Boris helmeted and on bike on trailer, make an entrance. We misjudge, find ourselves driving past Mick outside the motel.

Bugger. Plan C: they must be at the pub. We get to the T-intersection at the bottom. I go “Coppers! Ten o’clock!” Dino, Stevie: “Where?” Me: “Get Boris off!”

We walk. Everything in Cowes is closed. Mick says we should buy some snags and steaks at the supermarket, go to his place and have a barbecue. We decide that this is too much of an imposition. Mick insists three times. We are overwhelmed by this hospitality, but refuse. Boris and the team head for the motel, I cadge a lift with Colin back to Melbourne, and he goes hugely out of his way to drop me at the airport.

It’s time to go to work.