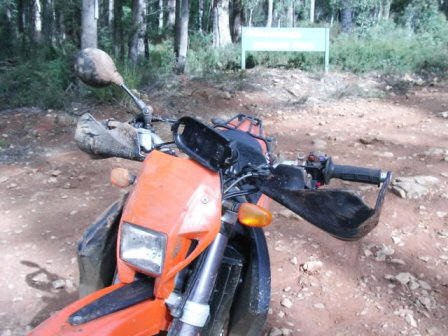 Up around 0700, bikes already gone. Quick toast and coffee in pub, on road to Canberra.

The Rover appears to be performing slightly better.

At Rover dealer around 0800, management not in. I borrow Internet connection, leave blistering email with hosting provider re site being down.

We find auto electrician, suddenly my phone rings. It’s Miles. Dave has crashed and broken his arm, is being casevaced, his bike and gear is at this grid reference and this is a description of where it is.

We get back in the car and leave. We stop for diesel and Dino puts more injector cleaner in the juice. 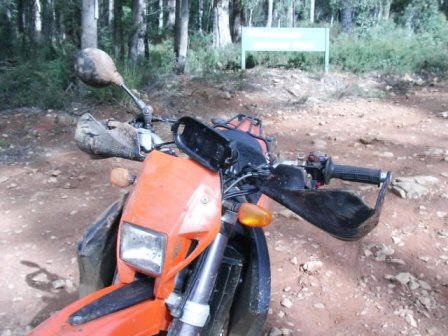 Stevie offered to ride it out

We head for a place called Brindabella. We put the co-ordinates Miles gave us in our GPS. The car is still running like a pig, but maybe a slightly smaller pig than yesterday. On approach, the co-ordinates we have don’t match any road.

We follow directions. We get lost. We turn back five km and stop a hippy guy in a farmhouse. He’s heard about it on his VHF. He’s watched a chopper hovering for an hour and a half before if went off to get more fuel.

He wants to draw us a map in the mud with a stick on where to find the intersection of Boundary and Bramina. We ask him to do it on paper with a pen instead. He looks disappointed, but complies. 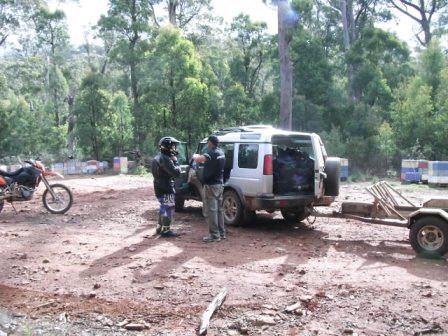 We go back up the five km we just turned back from. We get to Boundary and Bremina. Miles’s message is that the bike is about 2km north east of there. We stop at the intersection. There is a bunch of bee hives there. We’ve just come in from the north east. We saw no bike.

I scan the forest for game: old habit. There’s no game, but there’s an orange KTM hidden in the bushes 3m off the road.

It looks rideable. The tracks are rough. We don’t want to tow it out yet. Stevie offers to ride it out. Dino lends him clothes and a helmet. We leave.

We check out Dave’s gear. His bags and motocross boots are there. His jacket has been sliced very professionally by a medic.

We follow tracks. The road gets wet. Stevie is in front, he stops. We stop. He points at the ground: “They’ve turned around.” 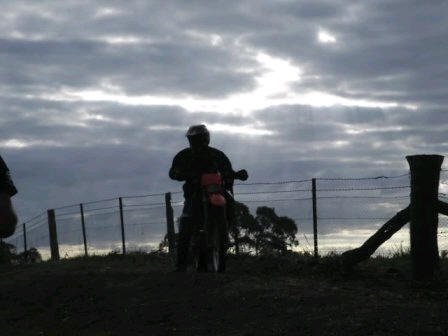 We try to follow tracks back but they disappear. We put “Tumut” into the GPS. It plots a route. We turn down Emu something track as directed. Three kilometres down, we come across a locked gate. We back out (with trailer) for a long way up a bumpy hill.

The bloody GPS still keeps telling us to go down Emu something Track. Our maps are no good. We plot a manual route on the GPS and head for Tumut. There are lots of fallen trees, lots of wet clay, a gnarly water crossing. It is about 75km before we get to the Snowy River Highway.

The Rover seems to be going slightly better.

We finally get on the tar. It’s about 1530. Lunch would be nice. We trailer the bike and set off down the Snowy Mountains Highway. We get a call from the guys. The Dave accident has cost 6 hours. Don’t head for Omeo, we will camp in Thredbo.

The Snowy Mountains Highway is fantastic, built for fast motorcycles. We don’t have one. We have a sick Rover with a sick KTM on a trailer behind. As we start to gain altitude, the engine gets worse. It gets dark. We limp up hills at about 35km/h. The engine hunts badly under load.

On a downhill, a rabbit sitting in the middle of the road sees us and feints left before running right. Second death. Dino appears unconcerned about how long rabbits mate for.

We get into Thredbo around 2000. We find the lodge. The welcome is warm. So is the beer. We don’t care. The pizza is cold. We don’t care. Boris is in his underpants and a BIKE ME! t shirt. We care, but only a little. Dino is exceedingly short with everyone. He improves after several pizzas and beers. We review injuries. The story of Dave hitting the wallaby is retold by everyone. Mick has done something ugly to his hand.

There’s a TV and VCR. We plug in our movie cameras, review footage. Miles and Stevie go out to chase women at some jazz thing happening in town. Stevie is still wearing Dino’s motocross pants. We shower, and review tomorrow’s schedule. It’s back the way we came in to town. We’re not looking forward to it at 35km/r up hills.