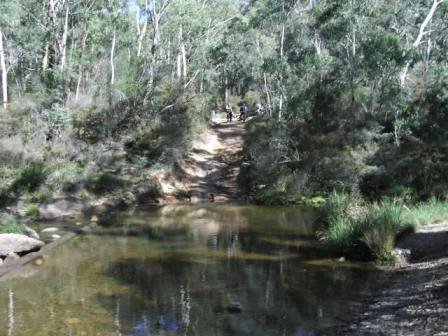 Arrived Chez Mick 2230, sought out Mick: “Sorry mate, I haven’t finished work yet. Can I borrow an Internet connection and a telephone for an hour?”

I could. Worked for an hour, drank the remaining two fingers of Wild Turkey. Mick gave 60 second camera lesson, appointed me Camera C. Shook hands with Dino and Stevie: haven’t seen them since Binacrombi. Got to bed about 0030. 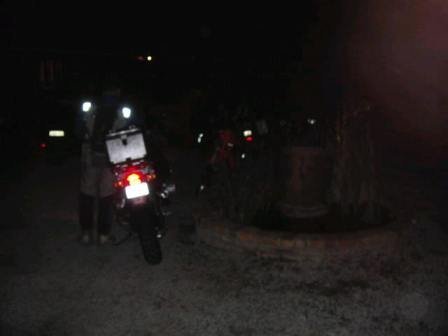 This is what we call in Australia, “Sparrow’s Fart”

Big house. Men dressing in dirt gear, others making quick breakfasts. Coffee’s on, I grab a cup and a couple of pieces of toast. It’s still dark outside.

Dino’s Land Rover goes pretty hard for a 4WD. The bikes pass us on the tar though. We get to Wiseman’s Ferry and wait. Cigarettes are smoked, jokes cracked. BIKE ME! like war, or prostitution, 99% waiting, 1% furious action.

Dino’s Rover goes bloody hard on dirt. It’s got ABS and traction control, it goes around corners at speeds where my 4WD would be spinning sideways collecting trees. After a while we get used to Dino travelling molto fast. He’s in control, we relax. 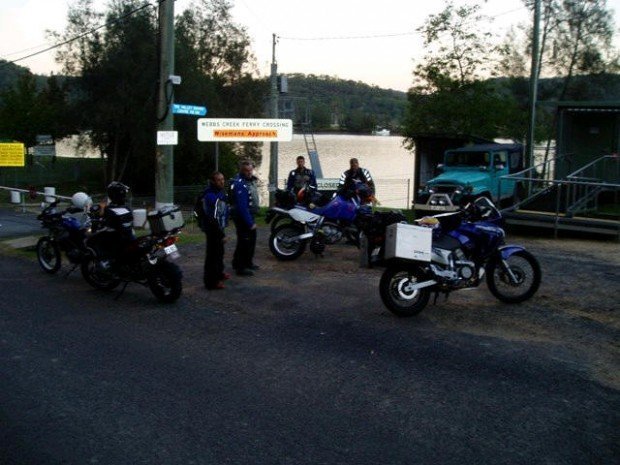 Stop for shoot of wooden bridge crossing, Stevie adds three minute camera lesson to Mick’s previous 60 second one. We move on. Cross Putty Road, get to Bell’s Line, tiny bit of tar, cut down to Bowen’s creek. We lose comms with chopper, finally Roger flies it to some spot where the radios work, we direct them and Andrew gets shots of bikes descending valley.

We start up from Bowen’s creek. Problem: severe loss of power on Land Rover, won’t pull past 2500-3000 rpm. We get to the top slowly. Dino has had turbo replaced under warranty recently. Dino calls Rover mechanic, we stop, rev car, squeeze pipes, car is getting boost but no power.

We push on: the Rover does 100km/h on flat, more downhill, 25 uphill. Stop at the Farmhouse at Hartley Vale for a pie, bikes go Coxs River Road, we take the tar.

South of Jenolan Caves: first water crossing, feet get wet, bikes stay vertical, car makes it. Roads are good here, but we are losing the bikes as the Rover’s stopped doing hills. There is much discussion by three reasonably mechanically minded occupants of the Rover about what it could be. Now we think the wastegate is jammed open. Or fuel filter.

Tar finally, still slow. We get to Taralga. Bikes leave, Stevie and I find the pub, Dino gets the local mechanic to drop his other work and drop the filter on the Rover.

Dino decides to put some injector cleaner in it anyway. 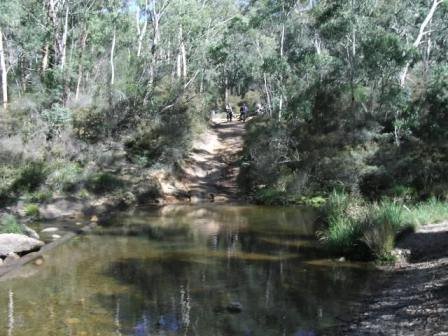 Stevie and I come back with a six pack and a bottle of Turkey. We leave. Car is still slow on hills. We get to 100km/h on flat, two Rosellas swoop in front, we hit one. Dino is upset. “Fuck fuck fuck fuck. They mate for life, you know”. I didn’t know.

Six pack runs out just before Goulburn. We call the NRMA, who send a guy out after half an hour to tell us to take it to the NRMA depot. We do.

Guys at the NRMA repairers diagnose a faulty air flow meter. They scare us with estimates of the cost of a replacement unit. “<Sucks air between teeth> Two, maybe three grand.” It’s full of thick burnt oil. I look at connecting pipes. The tappet cover vents into this pipe. I’m not sure they know what they’re talking about.

Collector. I get mobile coverage. SMS comes: “Site is down”. I find publican, try to borrow Internet connection, get led through private bedrooms to computer. It’s dial-up. I dial. I get a connection at 14.4. I open the site control panel. The modem hangs up.

I dial again. I get another connection at 14.4. I try to open the site. The modem hangs up.

BIKE ME! people are adults. They will have other things to do with their time. Some of them own motorcycles. They could go for a ride. I’ll fix it tomorrow.

I feel like drinking whisky. Others feel like eating. I get to dinner. I call a mate and get him to run a support chat with the web host. It’s slow. He calls me back. They have said that the site is down because they are not the DNS host. Stupid monkeys. I don’t have enough battery or patience to talk him through ripping them a new one. I will sort them tomorrow.

The restaurant is good. I try to crack wise with the waitress. “Is the beef stout pie a beef pie that’s really fat then?” She’s not interested in banter. “It’s a beef pie cooked in Guinness.”

The food arrives and is good. There is red wine, it is good too and so was probably chosen by Mick.

Back to the pub. Now I feel like drinking whisky to excess. I sit down on the step with Boris. We eschew glasses and pass the Turkey, tell long quiet stories. Some guy from the site rolls up. We chat for a while. He has to ride, doesn’t drink with us. The Turkey is cutting in. I forget his name. I forget my name. Boris remains memorable. Things are kinda blurry after this. I end up in some kind of dormitory with six beds in it and sleeping men.

There’s always a snoring bastard in these situations. I don’t notice one, so it was probably me. Huge day planned for tomorrow, 0430 start for crew, we will blow it and seek out the Rover dealer in Canberra first thing.