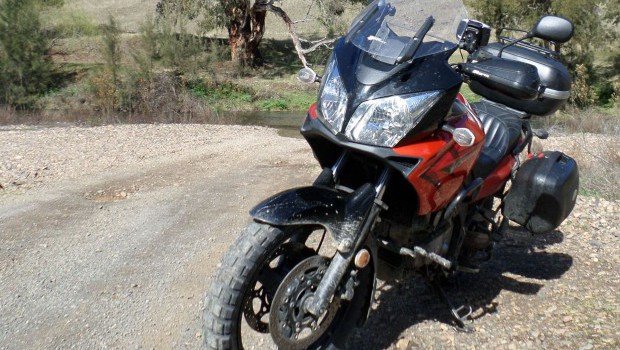 The email started “I am reaching out to you” so I hit the delete icon. This was to be a week of action and preparation, of stiffening the sinews and summoning up the blood, and there was no place for whiny needy importuning.

I told the shop to put a Shinko 804 on the front of the V-Strom, and a Shinko 805 on the rear. I had been looking at Metzeler Karoos, but it is a silly name, even if it is named after a sandy bit of South Africa. The Shinko 804 and 805 would have been named shortly after the 803 name was rejected, by stern Japanese businessmen who growled at people and ate raw meat and drank strong saké, and not by some effete German with pieces of orange in his Franziskaner Weissbier. I would be having me a piece of that action.

I went out at lunchtime next day with the adventurous accountant. “That place looks as dodgy as fuck”, I said as we walked past some restaurant labelled in some Asian character set. “Yeah”, he agreed. “Wanna go in?” So we went in and nothing was in English and they only took cash and we pointed at other people’s food to order and spoke loudly because that always helps get one’s point across to non-English speakers. It was very tasty, and as dodgy as fuck, and it cost us fifteen dollars.

I picked up the bike that afternoon. The knobs on the tyres looked large and manly, but there was lots of mould-release compound on them and the traction was as dodgy as lunch. It improved over the next couple of days, so on Saturday I took the old Anarkee up to Ben’s place. He only commutes, and he needs a new tyre.

I hit the first dirt about 200 km from Sydney at Aarons Pass Road, which my GPS calls Arrons Pass Road, and it was great. I was running 20-30 km/h faster than I normally go. Ben was at work, so I left the tyre hooked over his front gate. I went back via Sofala, and splashed through the causeway and took the dirt Razorback Road through to the Castlereagh Highway. Some of the dirt was still muddy from the previous week’s rain, but the new tyres inspired much confidence.

The Shinkos are lumpy, but they work okay on the tar. They feel a bit weird due to the wobbly knobs and lack camber thrust, but a bit of handlebar fixes it.

You googled camber thrust, didn’t you?

I am a river to my people.